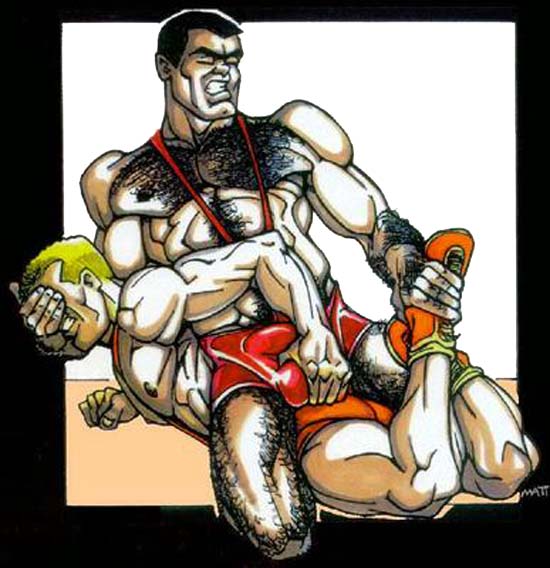 Matt must be one of the best known and easily recognisible gay artists but though popular he doesn't seem to attract the dedicated fetish following of some others like Cavelo. He is well known for his craggy faced men with prominent cheek bones and cleft chins. His usual style is comic-like and quite austere with thick lines and hard delineation of muscles and it's not especially sensual. However, in the wrestling picture above, his use of situation and detail (like the hairy chest and leotard-clad butt cheeks) is very sexy.
(I suspect the colouring of this picture is not original.) 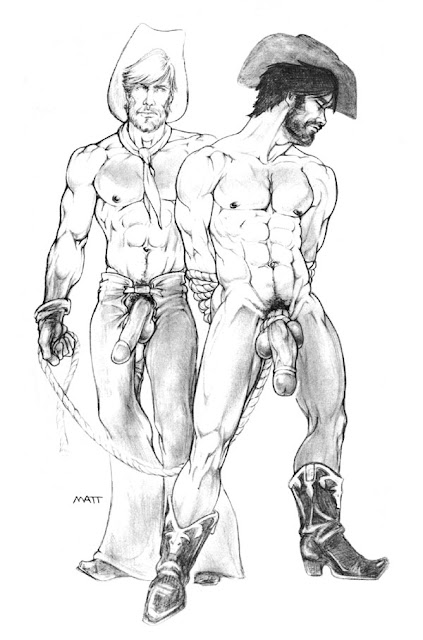 Matt - Cowboy Bondage
Cowboys and wrestlers often feature as subjects and provide some of his best figure drawing, the cowboy bondage shown here is sensitively done. This posed composition with disinterested captive and captor's thoughtful look is reminiscent of Luger's slyly suggestive work, almost a pastiche in fact, but there's a slightly harder fetish edge. Other pictures in this series depict branding and sharing of 'warm beer' in the same disarming way. 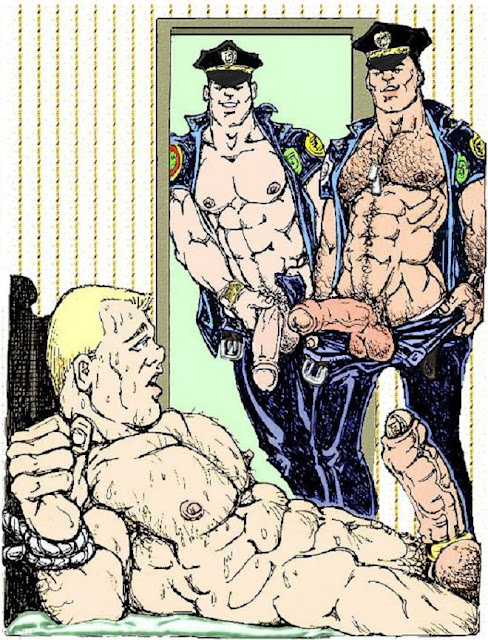 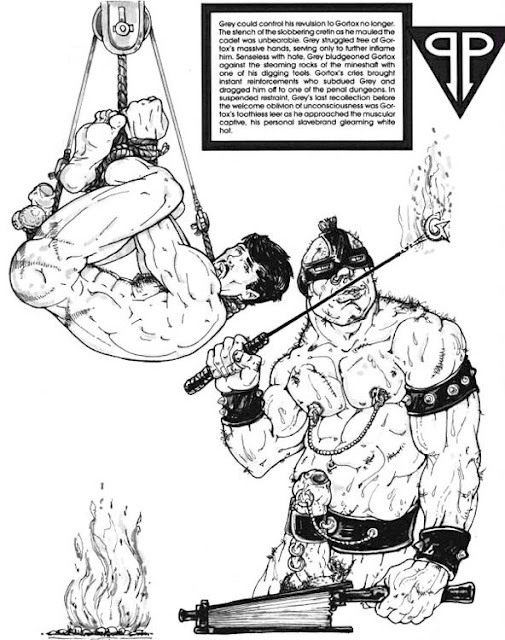 Matt - Sado Island 08
This lightness may detract from the appreciation of Matt's extensive, serious leather and S&M material which is unexpectedly flavoured with masks, heavy strapping and oversize boots. The fantasy story, Sado Island is perhaps his most significant piece in this genre. It follows the fortunes of two lovers caught up in a struggle between two sadistic regimes and learning to enjoy their endless brutal 'training' and punishment. There are some memorable images like the suspension punishment shown here and imaginative inventions - like the tubular glass punishment cells (not shown) but it doesn't sustain quite the same level of invention or thoughtfulness as Leo's story of 'The Estate'.

Matt isn't really thought of as a fetish artist but he deserves to be much more highly regarded for the sheer range and power of his subject matter if not so much for his technique. I don't know of a dedicated website. You will find his work in the GMBA archives but because of his humourous approach he often turns up in other general gay art groups too.

To see earlier posts in this series click A-Z in the label list below
Posted by Mitchell at 22:08

I found his works are very difficult to find...especially the Sado Island series...

You are right but the books are still available.