Joe Johnson is one of the early artists in this selection, as you can tell from the hairstyles his men sport. The pictures mainly feature whipping and belting although I also have a piercing picture. 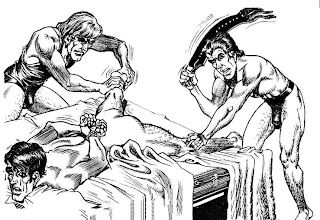 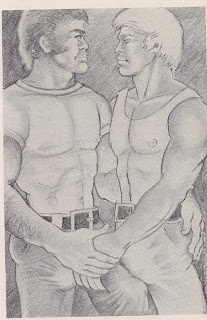 The second style consists of much softer pencil worked drawings something like the style of Esposito. The characters have more voluptuous bodies (and hair) and their faces seem less pinched and angry. The fetish proceedings are equally severe in nature but have a less intense atmosphere with balletic poses and discharges of impressive creamy fountains. These pictures are less detailed and not so realistically rendered like the vanilla example shown here.

Sorry no link info.
For earlier articles in this series click on the label A-Z below.
Posted by Mitchell at 18:28