Joe T's world is inhabited by predatory leather men who abduct sportsmen, cops and the like in order to subject them to S&M tests. They are undressed of course, but rarely stripped totally naked - although they sometimes are obliged to swop their street clothing for leather garments (and oversize restraints). Their captors generally remain fully clothed in conventional jeans, T-shirts etc, perhaps with a leather garnish of jacket or chaps. I appreciate this. For me, men look more undressed if they have lost some but not all of their clothes. Retained clothing suggests an identity e.g. hated cop, naïve young jock, it helps to fuel the viewer's imagination. It's not an easy option for the artist, however, as drawing clothes requires considerable skill. JoeT's lovingly detailed depictions of leather jackets, boots etc are very successful. 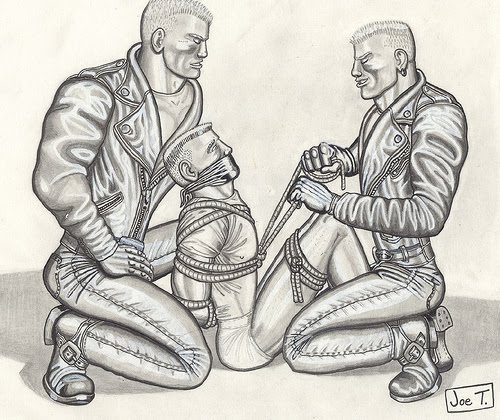 Like the artist 'JF' (see mitchmen A-Z article on JF), JoeT portrays the helplessness of his captives and particularly their fear as they are tied up and gagged. The captors are suitably intimidating with muscular bodies,cropped hair and square jawed, 'not quite handsome' faces which have prominent cheek bones creating a striking Eastern European appearance. 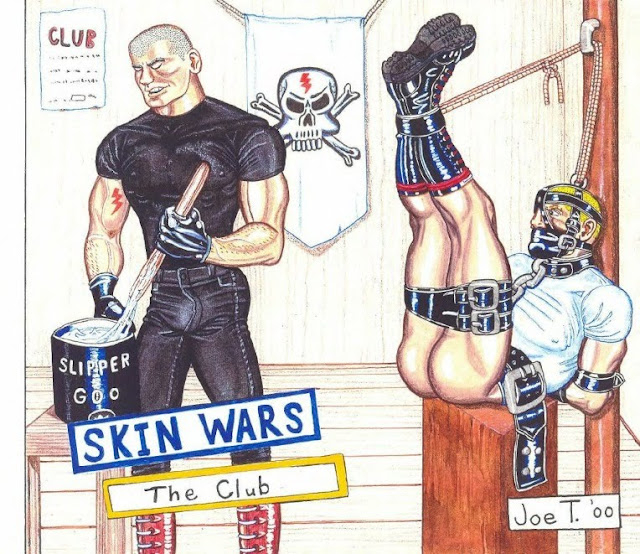 The prisoners look on helplessly as the items required for their ordeal are marshalled in front of them or as their buddies succumb to the same treatment. On the whole, JoeT's villains seem content to secure their captives in painful positions and perhaps take control of their orifices with plugs and tubes. They don't inflict severe torture or violence upon them but make ominous threats. The victims are quite likely to end up totally immobilised, suspended or tied to a frame to contemplate their fate – whilst their captors seem to be casually going out to a bar or club, leaving their toys and playthings behind – at least for now. This bizarre mix of unresolved S&M fantasy and everyday reality is fascinating. 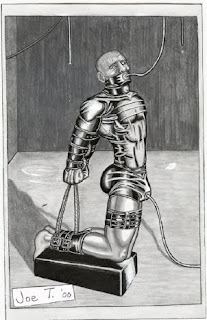 JoeT's art has a certain kinship with that of Boundex (see mitchmen A-Z entry) Their styles and subject matter are somewhat similar but JoeT favours the persona of leather rather than rubber and he also places his characters in more specific situations. His pictures are cartoons but with a high level of detailing and simple perspectives that create a good sense of depth. 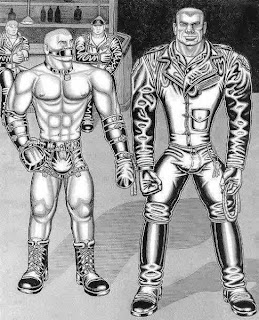 You get a strong sense in his work that he is describing a rich fantasy in his own head which is anchored in real life. He occasionally draws on popular culture for inspiration, musicals like 'Les Miserables' and 'Phantom' for example whilst the 'Wasteland' and 'Outbackers' themes seem to acknowledge the post nuclear apocalypse worlds of Science Fiction as conjured up in the 'Mad Max' films for example. You feel you are getting to know something about the artist through his work. For all that, JoeT is elusive on the internet, postings are irregular, he protects his work and his sites come and go.

For earlier articles in this series click on the label A-Z below.

The Les Miserables and Phantom pieces were actually based on scenes from the classic novels rather than the musicals.