Lets start with names. Etienne and Stephen are the same artist, real name Dom Orejudos. I believe he used the Etienne name for his paintings and Stephen for his comics but the Etienne name is the more widely used and more distinctive label. He published his work in the 60’s, 70's and 80’s.


Etienne is normally up there with Tom of Finland as one of the all time greats but I know that for some people he misses the mark erotically. His body of available work is so large that it’s difficult to know where to start. He his probably best known for his comics and story telling series rather than individual images (in contrast to Tom whose Kake stories are well known but rarely feature in his top ten as it were).

The result of this ingenuity, however, is far from tame. The sexual menace of the biker gang assessing the surfer at their first encounter (above) is fantastic and the faces of the two main bikers are beautifully rendered. However, whilst the situation is hot, there is something fuzzy, almost unfinished about the rendering of the bodies and legs which somehow diminishes the sexuality and the impact of the image.

This picture also shows an interesting feature of Etienne’s drawing - the characters often have quite short legs. If you look at a photograph of a male model the distance from crotch to knee is usually about the same as the distance upwards from crotch to the bottom of the pecs. The two gentlemen below illustrate this point.
. 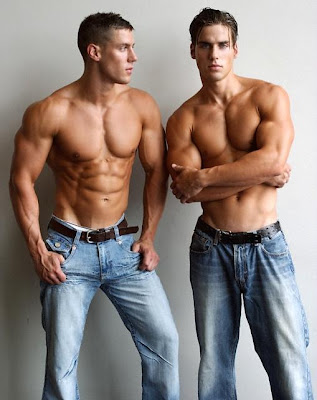 Etienne’s proportions are quite different - even allowing for the ‘unbundled tackle‘ beneath the underwear. Check out the surfers proportions. Most artists start out by painting themselves so this is quite likely a reflection of Etienne’s short stature but I can’t help wondering if this is one of the things that ‘blocks’ his art for some.

More Etienne in the next post
Posted by Mitchell at 14:02