Regular readers will know of my admiration for Tom of Finland's work which was instrumental in setting me on the path to self acceptance and 'liberation'. If you're a fellow fan you may have already seen the 2015 postings of a rediscovered series by the great man, showing three motorcyclists cavorting in mud. 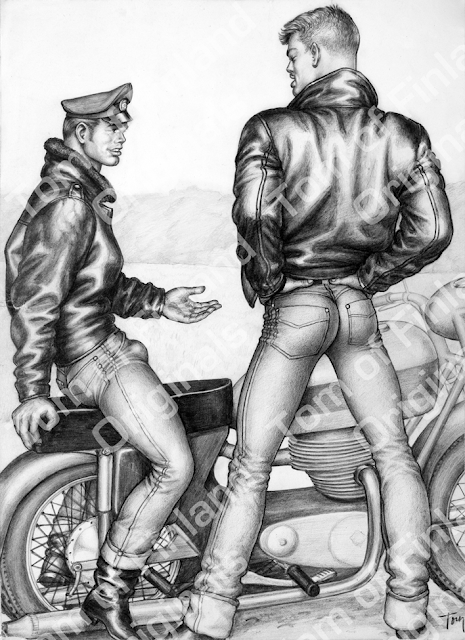 This is the opening image of the set which the publisher has placed in 1959. It certainly looks like an early work from the faces, but the technique (e,g. the leather jackets) seems amazingly advanced and detailed. Perhaps that's because most reproductions of his work from that time are very fuzzy.

As a private commission the series is also much more explicit than other works we know from that era. The motorcyclist's bulge shown here is a mere hint of what follows and it comes as quite a jolt to realise that Tom's graphic images of the 70's were a long time in the making.

This series also features a mud wrestling and bottom smearing scene that would have horrified 50's censors if they had had the imagination to understand the innuendo. Presumably this ingredient was stipulated by the person who commissioned the artwork, since Tom is not noted for this sort of eroticism. Interestingly, the playful image below, also from 1959, hints at a similar sensuality and I wonder if there's some sort of cross-fertilisation of ideas going on here. 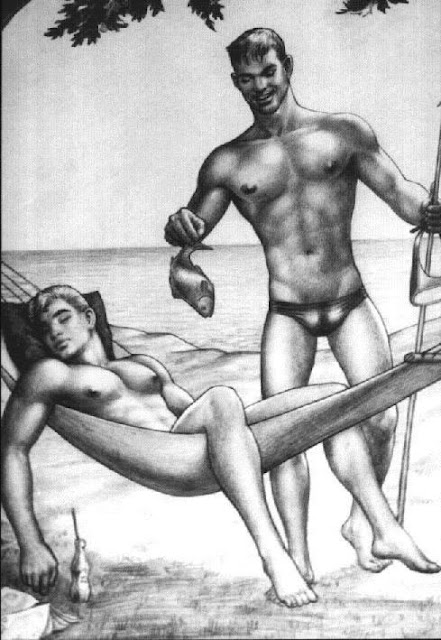 see the whole motorcycle set at Tom of Finland Originals

Other Tom of Finland Articles at this blog

or click on the label below
Posted by Mitchell at 07:34

Love your sight AND your insight into being gay. As for these Tom of Finland images... Hot Stuff. He was a gifted artist that tapped well in gay desires and fantasies. I really enjoy Tom's portrayal of cops. Especially when the cops are dominated by bikers, or black studs, etc.

Thanks for your kind comment. In an age of rush and superficiality, lingering and looking at these images is truly rewarding.