This is my last post in what you might call the 'first edition' of my A-Z of Fetish Artists (of which more anon). The artist is a recent discovery for me although the images featured here go back some years. His work pushes at the boundaries of my personal taste in terms of subject matter, age group and style. Nevertheless I think his work is certainly worth a mention here. 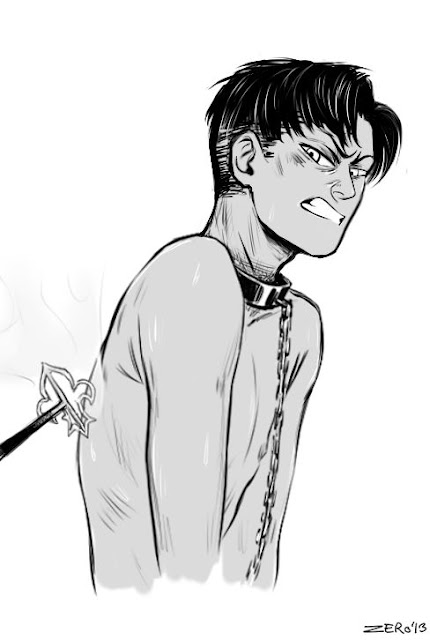 This simple but striking image sums up both my attraction to and reservations about Zero's work quite nicely. The implied branding fetish is dark and dangerous but the captive certainly isn't (or perhaps I'm getting old!). The artist seems to be Norwegian but his economical, comic book style is heavily influenced by the modern Japanese genre which I usually tag as 'spiky' art and am not a big fan of. If you place your finger over the caricatured, facial details you'll see the makings of a much more interesting male image. 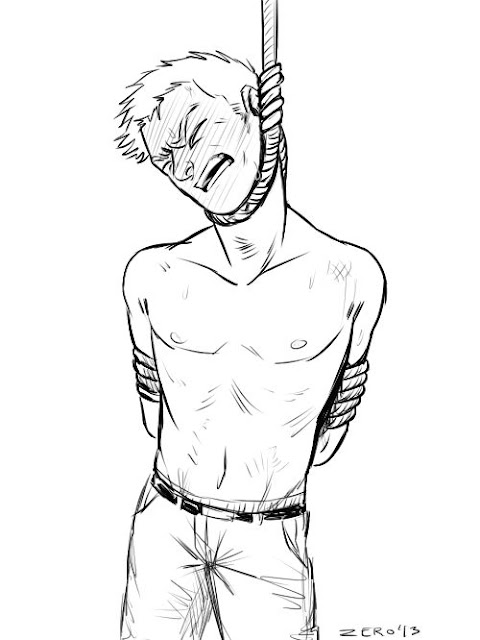 Noose-art is rare on the web for obvious reasons but we're obviously dealing with threat here not actuality. The comic-style characterisation seems to have wandered into the realms of 'Tin-Tin' and Tacitus adventures and that connection disarms the dark subject matter to some extent. At the same time the use of cartoon technique adds considerable impact to the grimacing, facial expression of the subject and you can't really tell how serious this piece is. 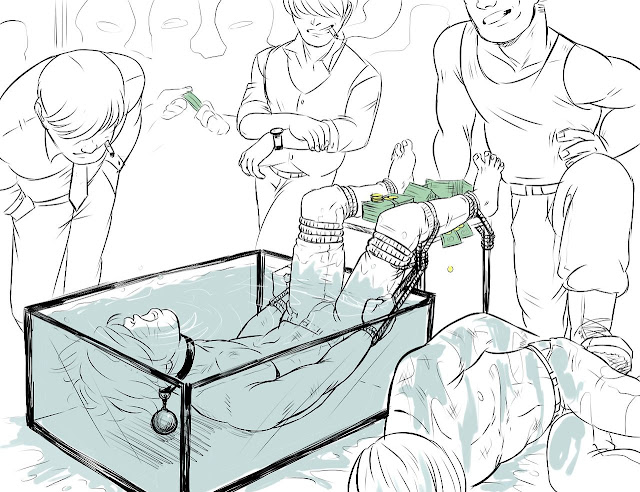 This picture by contrast tells a much more complex story of trial by water with bets on the side (drawn to our attention by colouring the money). The drawing of the watchers is actually more interesting than the captive here. You couldn't describe this scene as innocent but the formally-dressed man on the left looks like he's just left his office desk to get a coffee and just happens to have stumbled on an intriguing ritual. The other two men, who are clearly in charge of proceedings, are of a rougher breed and show a more knowing and callous interest, cruelly booting a second captive (his buddy?) who has already undergone the frightening experience. The cheerful, watching crowd in the background complete a scene that is both bizarre and disturbing. 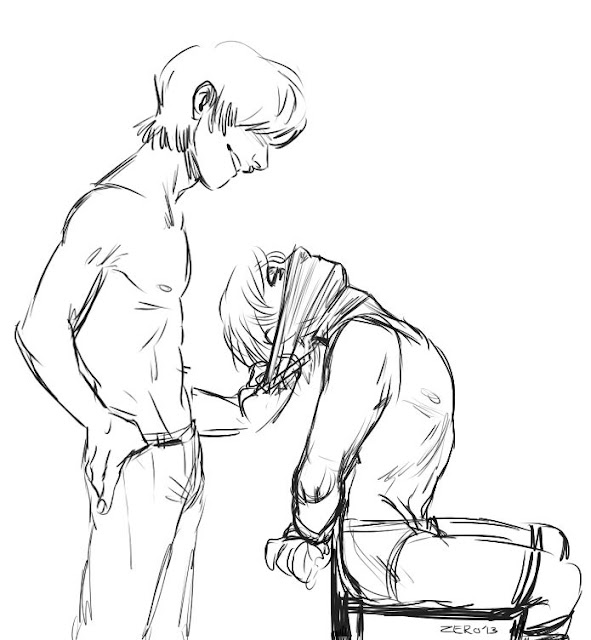 This looks like a conventional 'kidnap' scene with the captive in his underwear tormented with a wet face covering. The participants here are more youthful-looking than I would wish for but there's a sense of experimentation in this image rather than malign intent reflected in the shared but un-erotic semi-nudity of the participants. 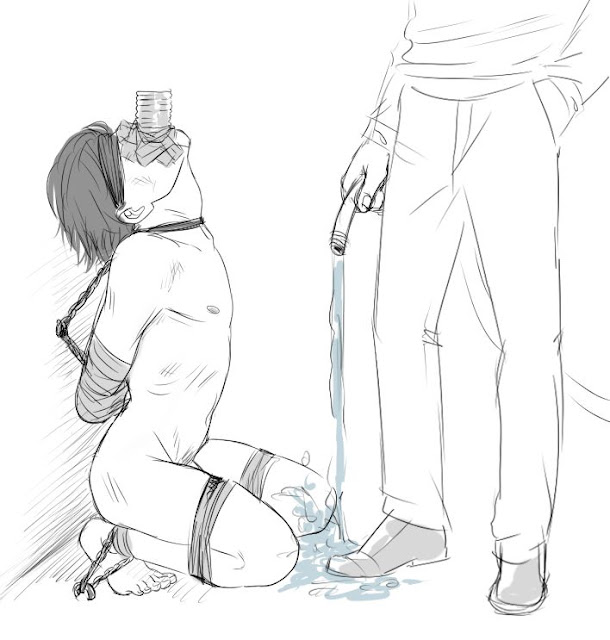 I'm not so sure about this scene though. There's a clear power relationship in play here, amply illustrated by the standing-kneeling and clothed-unclothed contrasts, as well as the more obvious bondage element. We can only speculate about the meaning of what we see but this certainly isn't a conventional dungeon scene. Not with a 'master' whose dress and posture are very normal and casual albeit with just the tiniest bit of eroticism suggested (and hidden) in the trouser detail. This casual veneer disguises an unusual and rather sinister form or water torture/breath control and if you look more closely you can see it has been preceded by a more brutal episode. I always encourage my readers to spend time studying erotic images more closely but sometimes you may not like what you find! A suitably challenging end to my A-Z.

This artist signs himself as Zero on his pictures but his blog is called Zero after Dark
and is very dark indeed with a tag line I'm loath to repeat on the Google platform. There's a related blog called Zerotation which is less demanding.

Note: There is another artist who is usually given the name 'Zero' and attributed as the creator of a well-known, vintage collection of black and white, bondage, photo-manips, obviously that Zero is a different artist.

For more articles in this series click on the A-Z label below or search for specific artists using the index page or the search boxes (in the navigation banner and top right)
Posted by Mitchell at 10:26