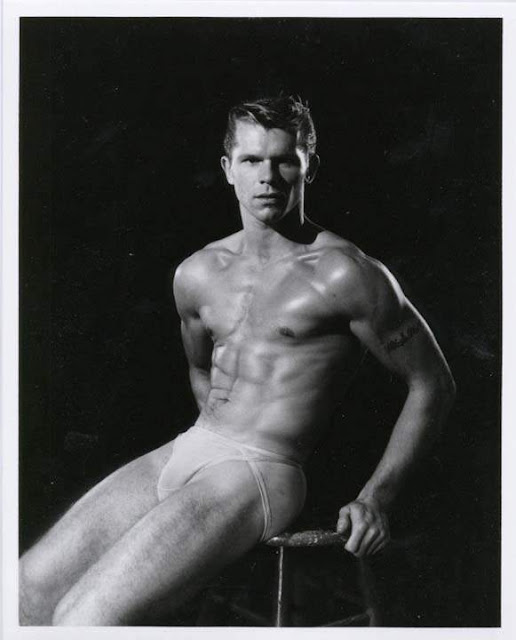 Don Hawksley
Don Hawksley models an unusual jock-like garment - or is it underwear? Notice how the crossing lines of the hems act almost independently of each other in visual terms making the model simultaneously appear clad at the rear but unclad too. I'm not sure how intentional this was, open backed jock-straps seem to have been acceptable in the 60's. This garment seems to be made of a very clingy material and is possibly wetted to enhance shaping and give a degree of transparency (a practice I noted in my series on Royale studios).
. 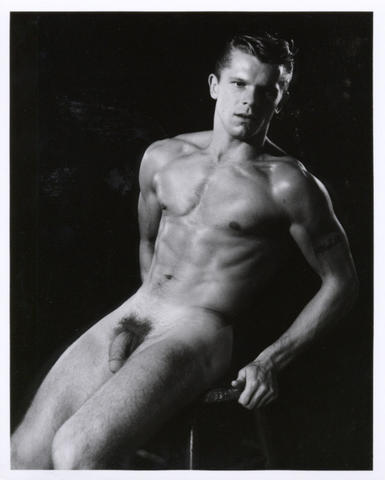 Don Hawksley
Same model, same pose, same stool but now he's jock-less.
The existence of near-identical nude and clothed photographs was a consequence of the censorship of the times. Readers knew that the discreet photographs published in magazines were just the acceptable advertisement and more daring, exposed (so called 'natural') images were available by post. Not that it was legal to send nude pictures through the post, it wasn't, but obviously it was harder for the authorities to detect that. Studios made a virtue of discreet packaging! Customers ordering from abroad ran the additional risk of customs inspection which was much more likely to detect undesirable imports. Unfortunately, if found, such items came ready labelled with the recipient's name and address, but if he was lucky it would just be confiscated.
. 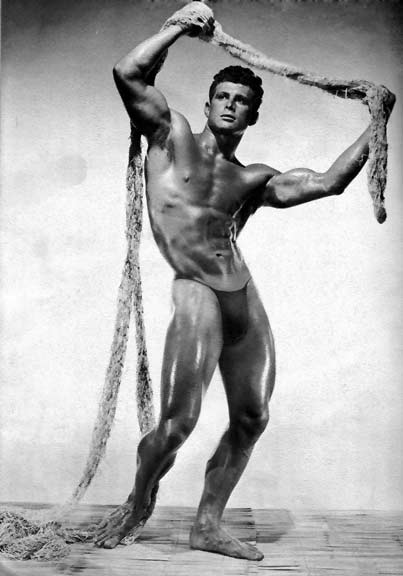 Jack Thomas
A name to conjure with! Jack models here in a posing pouch (to use the coy terminology of the time). It's the same as a G-string but perhaps the female connotations of that expression were too distasteful.
The fishing net was a popular posing accessory in the sixties, presumably that's to do with the idea of making a 'catch' as fishermen are not noted for exhibiting nudity (or sex appeal particularly). There's also a connection with gladiators which were a popular cover for nude photography and art. Having said that, I can't work out why he's holding it up in the air like this, he's not going to catch anything that way!
. 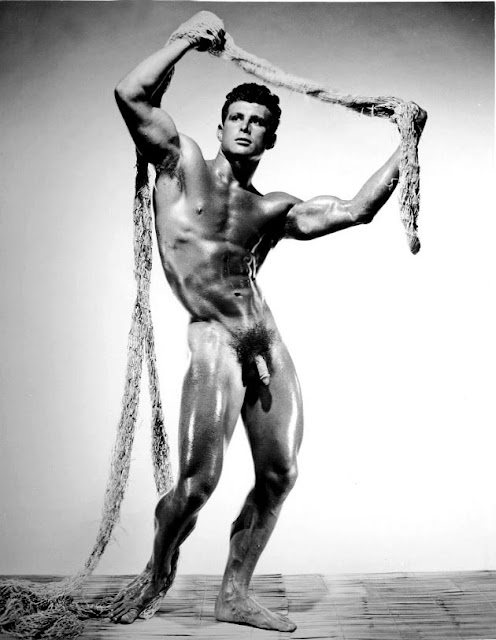 Jack Thomas
Same model, same pose, same net, but now he's pouch-less.
Holding up the net makes more sense in this version but it won't take you too long to spot that this is actually the same photograph. The pouch/G-string has been painted on in the first picture for official publication. Fairly cleverly, it must be said but it wouldn't fool the practised eye. The giveaway is the flat front and extra length needed to cover the offending organ although you can see the dangling shadow has actually been altered. Of course, the objective is not to make the covering look real, but to highlight the existence of the nude version of the photo without getting the cops on your case.

Some studios touching-up (as it were!) was extremely crude and the painted on layer very obvious - perhaps as a protest. This practice gave rise to the idea that photos were posted out with a covering which could be scratched off on receipt. I think this must be a myth, such a device would not cut any ice with the authorities and it's hard to imagine the suppliers laboriously painting error-correction fluid onto every image they sent out (typically in sets of 20 photos)!

To nude-starved viewers however the resulting clumsily-censored pictures must have been just as arousing as the unspectacular nude version.

More next time
Posted by Mitchell at 12:04