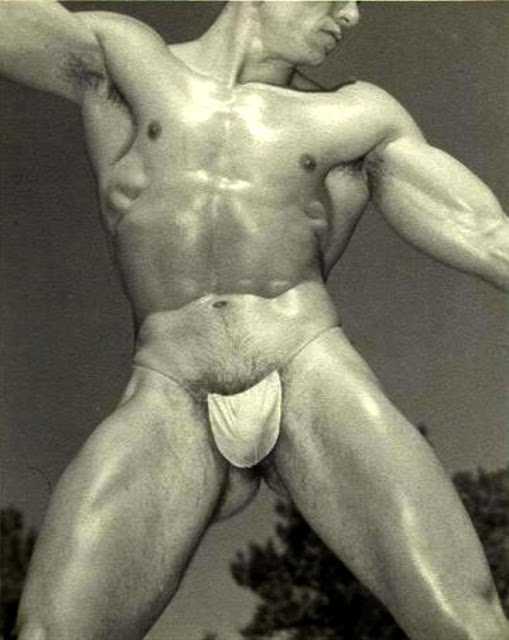 What do you make of this picture? It's obviously a magnificent torso image and that owes much to the skill of the photographer in preparing the oily model (I'll help with that!) and then audaciously cropping the image, removing half his head and outer limbs. It's awash with sensuality and for my money this G-string does not look at all out of place. The skimpy proportions and froth of pubic hair are unavoidably erotic when you're as close as this of course but it's shape is quite attractive too, with dipping curves seeming to echo the underside of the model's buttocks, like the overlapping scallops on a posh pelmet.

But hang on, what's happening to the support string on the left? It is definitely real - you can see the indentation and shadowing of the hip flesh quite clearly. As it approaches the pouch, however, it seems to dive down and miss the point where you would expect it to join up and disappear inside the top hem. In contrast, the right-hand string appears to fully obey the normal laws of keeping up drawers. The more you look at the pouch, however, the more it seems to be hovering in the air, just in front of the model, but I can't decide if it's totally faked (despite the beguilingly realistic right hand string), or if it's actually attached to some other device behind, which we can't see.
. 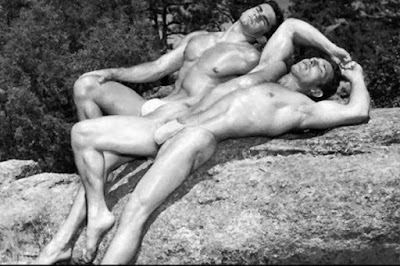 Exhibit 'B' is another typical WPG image of two shapely men enjoying the sunshine. Their poses do not look natural, comfortable or stable and that tends to produce a corresponding, dissatisfied feeling in the viewer. However, if you allow your eye to rove over the torso areas you can see how the curves of their muscles and bodies seem to fit together and subtly complement each other. Thus the shoulder and pec of the model at the back fits into the curve of his companion's armpit, while the sweep of his tilted-back neck leads the eye down the plane of his chest to sweep across the concave shape of the nearer man's abdominal cavity and thence inside his G-string. This requires very clever crafting of the model's positions. It not only looks nice but visually suggests an intimacy between them and is thus erotic as well as arty. The overall composition is not entirely sucessful but you can see how judicious cropping might easily produce an image just as spectacular as the first example.

The G-strings in this picture are not clear, but they form different and slightly odd shapes, the one at the back strangely mounded while that at the front seems to taper off in mid air instead of continuing between the legs. It has a rigid shell-like appearance, a construction which would avoid inadvertant shaping of the garment to the objects inside. It lends some support to my conjectures about the shield-like appearance of the G-string in the first picture.
. 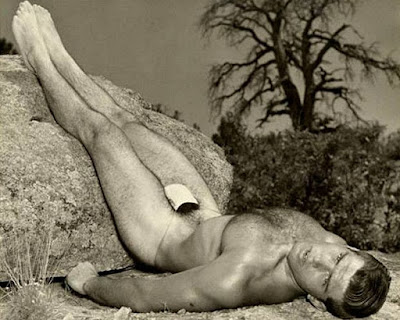 .
This image also creates that shell like impression, with side strings again that don't go where you would expect. The curve of the top hem seems un-naturally rounded but that creates an unexpected peeking opportunity. It's another example of the Studio's low key eroticism and their refined artistry is illustrated here in the echoing double curves of pecs and knees (and the same shaped G-string between them). Also the elegantly flowing body lines like those of a diver. He's quite cute too! 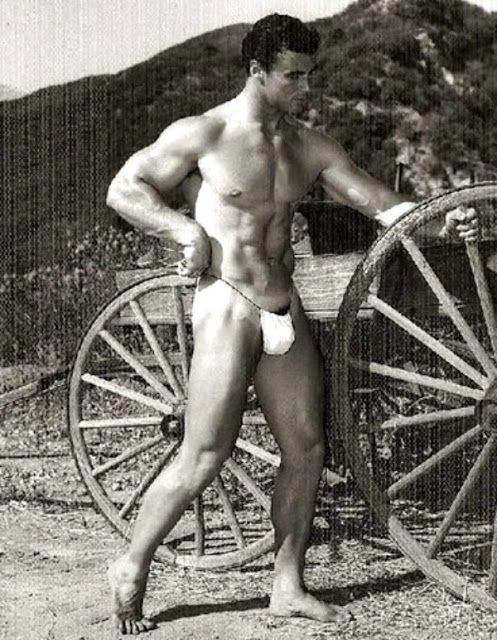 Despite the Western theme, I don't think this is a WPG image and there's none of their artistry in this stilted pose (how I hate hands on hips!) or the lighting which does little for the muscularity on show. This shot relies more on the inherent appeal of the handsome model and on props to make it interesting but there's a very clear gulf in quality.

It's not a good copy but you get the distinct impression that this chap's pouch has been well and truly doctored. The black shadowing around the irregular shaped white patch makes it look 'applied' and the string is also unconvincing, not seeming to quite connect with the hem. Remember though that these disguises were intended to look just that, enough to be decent but unmistakably hiding something more tasty whose outline, surprisingly, can actually be discerned in the shadowing.
This feels like the tail starting to wag the dog!

More next time
Read this series from Part 1

I'd welcome ID information on the models in this article

Fascinating 'de-construction' of G-string question. Didnt Mr X of the AGM LA, make his own? (Well I suppose they couldnt go out them!). For some models, they enhance the eroticism.

Logically I suppose the studio must have supplied them but you'd have expected greater skills from a gay man (if he was making them himself) and a desire to make those lovely men look great!