Greasetank has a uniquely legendary status amongst S&M art fans. It stems partly from the exceptional extremes of violence and cruelty which he often depicted but also from the expressive sensuality and drama which infused his most memorable images. 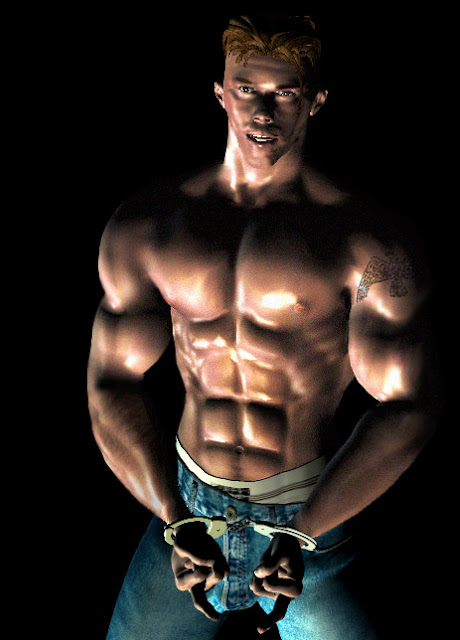 Greasetank - Why don't you officers just eat me?

Villains were at the centre of his works, like 'Johnny' above.
Evil men but with looks and attitude that commanded attention and admiration.
(see another example here) 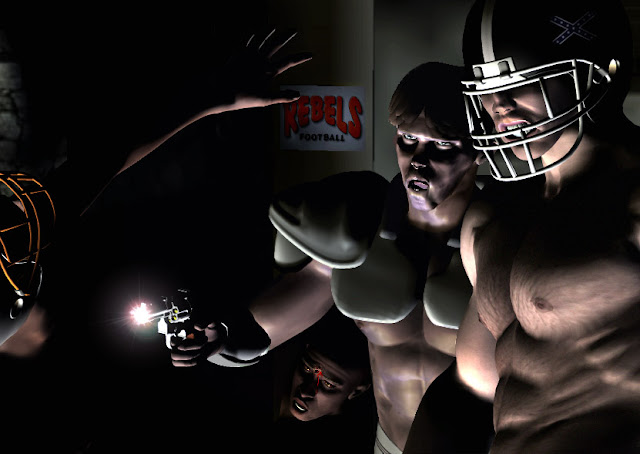 Greasetank's badmen have a penchant for arbitrary violence, often using guns and sometimes knives. But no matter how unpleasant, these marauding thugs are always depicted as muscular and strong with villainous good looks. Greasetank uses dramatic lighting to enhance the masculine characteristics of the gunmen. If their weaponry augments their masculinity, their nudity also augments the menace of their guns. The victims are anonymous, mere accessories in this particular Greasetank atrocity and in general rarely achieve equal representation with their attackers. 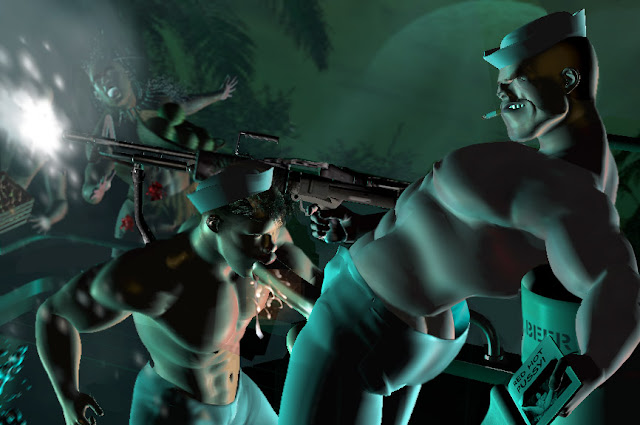 Naturally sex also forms part of the heady mix. I love this representation of sailor-dom with the young rating servicing his older, bigger (and straighter?) shipmate, who keeps marauders at bay with a machine gun while lightening his load. The linkage of sexual prowess with guns and ejaculation with shooting, is unmistakeable.

The whole scene is infused with eroticism and drama. The lighting treatment is atmospheric and alluring and through it you get a sense of Greasetank's underlying artistic prowess. At this stage he is still wrestling with the usual problem of creating clothing in CGI, but the facial expressions of the two sailors are very arresting, the older one's determined grimace seemingly borrowed from 'Popeye'.

There's a touch of gung-ho, boys comic adventure ca. 1950 about this scenario. There's a whiff of racist sentiment too and it also hovers around Greasetank's Vietnam War images. However, in his All-American 'Red Neck' images he shows black characters as both victims and perpetrators, so I'm inclined to give him the benefit of the doubt in this department.
. 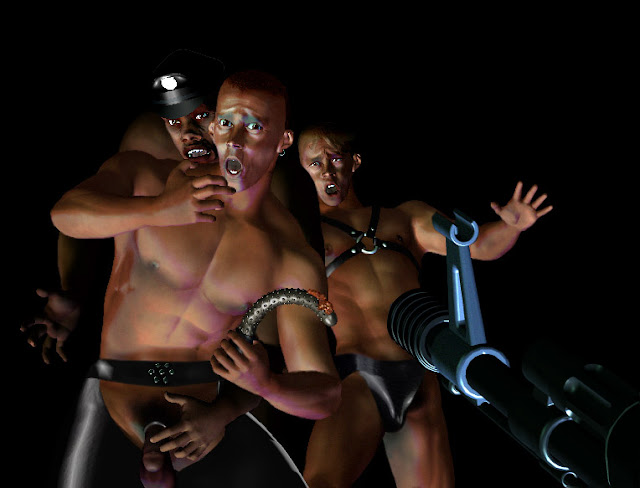 Cops raiding a night-time cruising ground and for once the victims take centre stage. Their leather attire speaks of experience not experimentation. But notice how young and vulnerable the two compromised gays seem in contrast to the examples of aggressive straightdom seen in other pictures in this article. How terrified they are by the threat posed by the weaponry levelled at them and the threatening attitude of the visible captor. With the damning, rather unpleasant dildo evidence centre stage Greasetank almost seems to be setting them up here. He gives you a sense of how perceived weakness can become an excuse for abuse. 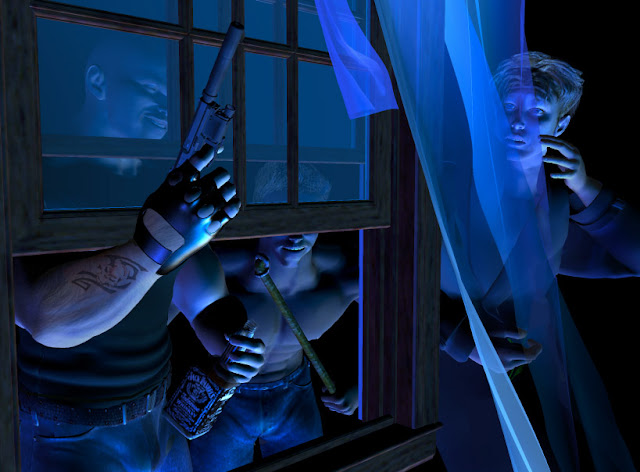 Greasetank - We're Coming For You

Greasetank more usually depicted homophobic violence at the hands of gleeful rednecks ruthlessly brutalising their favourite prey. This is a gay boy's nightmare made real*. Men whom he might find sexually attractive are invading his bedroom at night with the obvious intention of doing him harm and motivated by drunken-ness as much as any rational thought. The unfairness of it all and the imbalance of power is spelt out in the contrasting depictions of the characters. If you find this erotic despite yourself, you are discovering one of Greasetank's conundrums - if these people hate us so much, why do we find them sexually attractive?

*it's my supposition that this is a homophobic attack, Greasetank's pictures often accompanied stories and I'm not familiar with this one. There are internet sites that reproduce these stories.
Continued in Part 2

Greasetank as a CGI artist doesn't qualify for my A-Z series
but is included in my consolidated index of artists
Posted by Mitchell at 15:56