Ronald Wright belongs to the 1950's/60's when gay art and photography began to emerge from the shadows. This is the era of Physique Pictorial and other pint-sized magazines with names like Vim, Mars, Trim and Big. They circulated gay-interest imagery heavily cloaked with notions of healthy living, body building and Art with a capital 'A'. Quaintance was the colossus who strode that artistic stage, epitomising the idea that the naked, male figure could take the same place in great Art, the same sexual presence that women had seemingly monopolised since the Renaissance (although in reality that's not counting Michelangelo, Caravaggio and a mountain of images of Christ crucified that unashamedly glorify the male body). 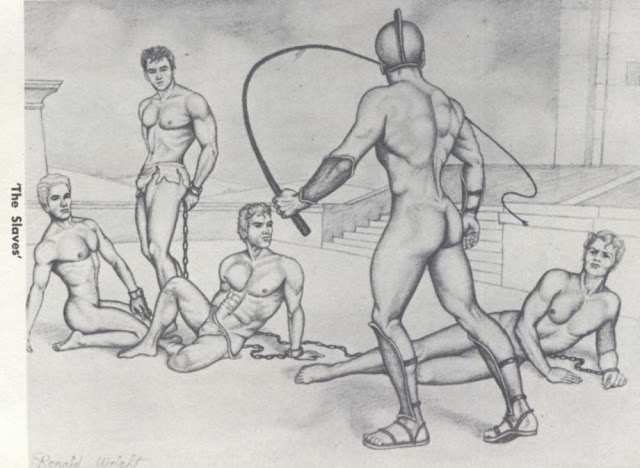 There was also much interest at this time in the ancient classical civilisations of Greece, Rome and the Middle East, which were perceived as more tolerant of 'boy-love', but also practised barbaric punishments and slavery, thereby providing fertile ground for those with S&M leanings. "The Slaves" (above) is Wright's contribution to that genre, unashamedly copying the ideas of Quaintance and indeed the Hollywood epics which were just coming into fashion.

This image has some creditable technical features, the figures and their faces look good, there's a recognition of perspective and shadows and the treatment of the sky in the background (obscured by the quality of the reproduction) seems to be quite subtle. Despite that it doesn't really work as a composition. The subject matter no longer grabs our attention these days but it's very obvious that we are looking at an assembly of posed, standard beefcake images that don't quite coalesce into a coherent and interesting whole.

The slaves look like a bunch of well-groomed boys on a beach whose sun-bathing and chatter has been disturbed by a tall dark stranger, rather than a group of fearful, over-worked, down-trodden victims under the lash. One senses they're more impressed by the guard's nudity than his whip.

There's actually another more interesting picture hidden within this one, comprising the two standing figures only, try visualising it. Of course, either of these interpretations may be exactly what Wright intended the viewer to see, this is the age of 'hidden eroticism' (see label below for more). 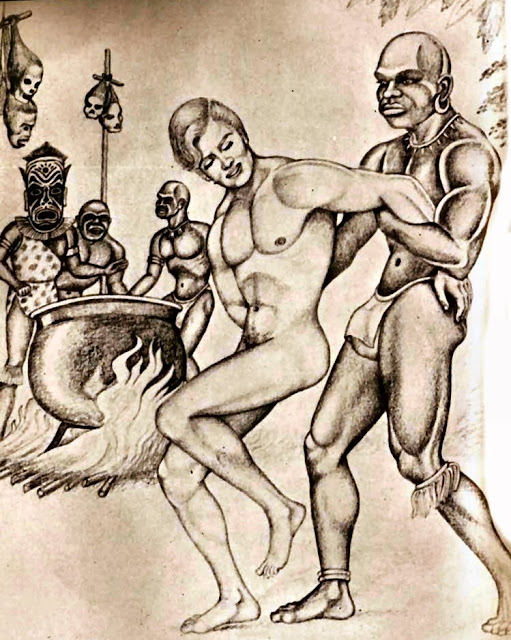 Wright - Into The Pot

I present this picture as a historical curiosity. It's one of Wright's best known images but recognised as an unacceptable, derogatory stereotype these days. In it's time the image of a (fully clothed) missionary in the cannibal's stew pot was simply shorthand for 'an unexpected problem' and as such was standard, recyclable joke material for tabloid cartoonists alongside (for example) castaways washed up on tiny desert islands with a solitary palm tree and bearded, long-forgotten prisoners chained to the walls of tiny, cobwebbed cells. These days the role of bogeyman has passed to imaginary aliens and the undead, but the thought processes involved are exactly the same, so perhaps we haven't advanced as much as we think we have. 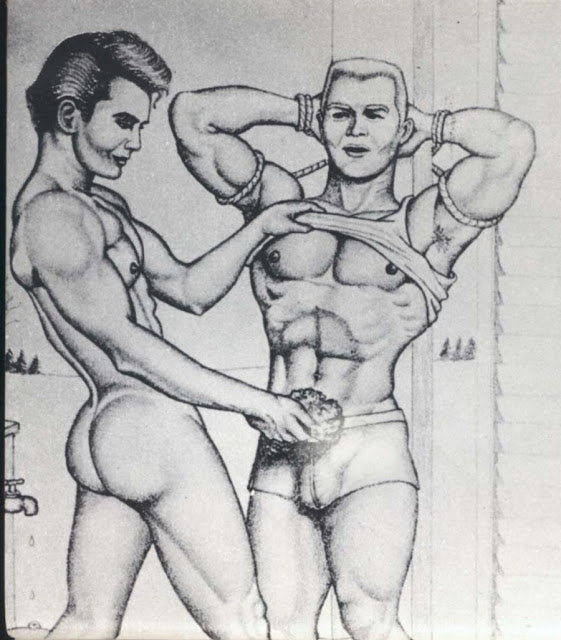 Coming from an age of censorship and suppression of suggestive imagery, this relatively crudely-drawn picture is pretty astonishing. There is no 'cover story' that I can see to disguise the sexual nature of the scene, how else to explain a naked man sponging down his companion whom he has tied to a post? Just larking around? Hardly.

There's no explicit detail (well maybe a suggestion) but that hand couldn't get any closer to it and we know that all will be revealed as soon as his wet sponge makes contact with the captive's underpants. It would make a good video passage. The dripping tap on the left makes it clear that the sponge is indeed wet and also suggests general sexual excitement. There is additional significance in it's juxtaposition relative to the sponger's backside, connect that with the faces of the two men which have been given distinctly different, 'fem' and 'butch' slants.

This is a more accomplished composition than the others we have looked at. Apart from the discreetly obscured nudity, eroticism is represented by a rope sensuously twined around a leg and the suggestively-shaped piece of cloth draped across the kneeling man's groin. More interesting is the 'strong, male protector' theme going on between the two slaves which might suggest they are intended to be used for entertainment value rather than work.

The potential buyers shown here certainly look wealthy enough to buy the pair of them (and their clothes demonstrate Wright's familiarity with fashionable art depicting middle eastern scenes if not the reality). However, there's one potential purchaser who is significantly younger than the others and he seems to have caught the eye of the more masculine-looking slave. Is this the eternal triangle given the rather nasty twist of a partner abandoned to an unknown but probably unpleasant fate? Wright has even arranged the 3 men in a triangular composition - neat.

For some reason, this image was reversed for publication and I have swapped it back round.

Wright's art is a product of and an interesting reflection of it's time. If it is imperfect in execution it nevertheless has some intelligent content and interesting fetish ideas which haven't dated at all.
It's hard to find his work but a search on his name will throw up a good deal of biographical information e.g. Gentleman Homosexual  , Sir Gay

(All pictures in this article can be expanded by clicking on them).
For more articles in this series click on the A-Z label below or search for specific artists using the index page or search boxes (top right)
Posted by Mitchell at 11:16