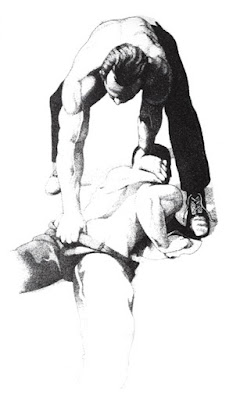 Ken Wood - Trip to the Woodshed -1

The 'contrast-y', pointillist style (which is more apparent if you click on the pictures to expand) seems to be cross-bred with the appearance of water colour wash in these 2 pictures and it's technically very skilled. Note the detailing of the muscles and  veins on the arms which may indicate photographic source material. Some aspects of this image (like the man's hair) remind me of Rex's work 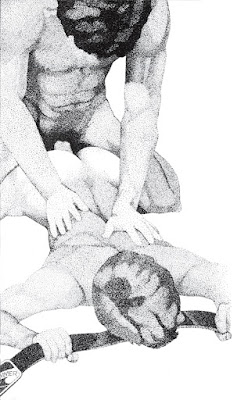 Ken Wood - Trip to the Woodshed -2

The belt here is the only clue to what's happened but the direct linkage of spanking and sexual pleasure in this way is not as common as you might expect in the imagery of this subject matter (click on the spanking label below to survey other contributors to the genre). Of course it's usually the victim's own belt that has been used to do the damage which adds a twist of humiliation but further distances the spanker from his handiwork as though to say "you've only got yourself to blame, you brought it on yourself". That stance becomes rather questionable if he then proceeds to take the opportunity for sexual gratification.

In this confused, psychological stew, Ken Wood's 'vagueness' of style actually seems quite appropriate. The water colouring effect is more obvious here in the men's hair. 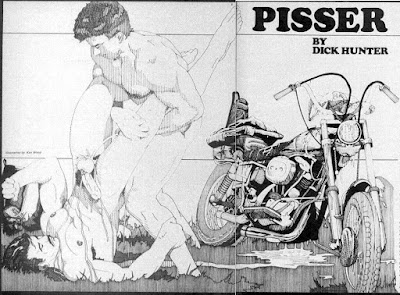 
The circumspection continues with this double page spread featuring an even more delicate subject. To do him credit, Wood does not shrink from explicitness (apart from concealing 99% of the source of the stream) and it's a pretty exciting interpretation featuring once again that sense of forceful compulsion. However, the cross hatching style he's adopted here doesn't exactly push the image into your face. Even allowing for publishing issues it's clear that he's much more comfortable with drawing the motorbike, even to the extent of showing quite clearly that it has also been christened in the same way. The carefully folded leathers on the bike seat are a hilarious but absolutely authentic detail.

Tom of Finland connoisseurs might like to note the width of Wood's motor bike tyres. They are accurate but Tom famously described how he deliberately widened his bike tyres for one image (below) to make them look more butch. 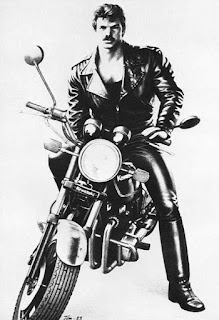 You can see his point!


~
There is arguably an element of fashion in Ken Wood's style which might be described as 'selective detailing'. Bill Ward, a contemporary, fellow contributor to Drummer, did the same thing to show dreams or rapid sequences of events.

I don't know of a site for Ken Wood and searches don't bring anything up. If you are interested, a search of Drummer images might be a good place to start.
.
All pictures in this article can be expanded by clicking on them.
.
For more articles in this series click on the A-Z label below or search for specific artists using the index page or search boxes (top right)
Posted by Mitchell at 09:13