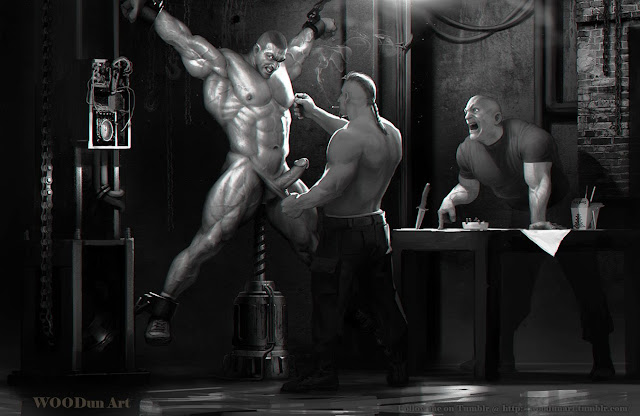 Woodunart is a relatively recent arrival on the scene and this image probably made the greatest impact on the fetish community. This aspect of his work is bondage-oriented with added torments. There's an undercurrent of danger and even brutality in some cases but it's not explicitly shown. The scenario is very like 'Inquisition' like, but is it just my fancy that there's a cross on the right hand wall? 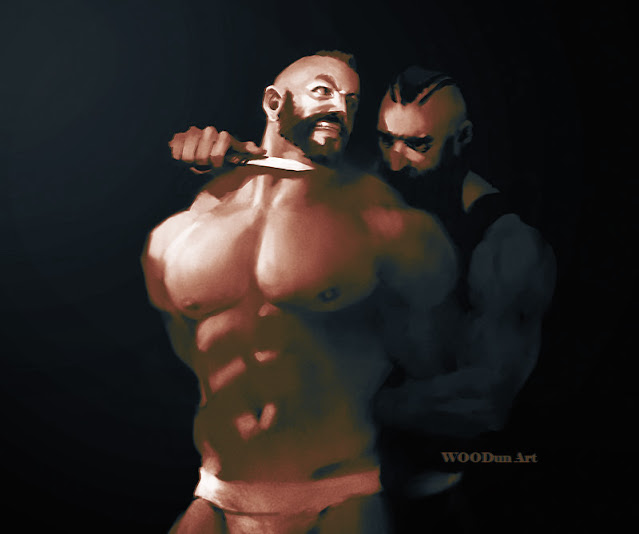 WoodunArt's images mostly feature big, mature men like these and the idea of highly muscular men being forcibly abducted in their jockstraps is very fertile ground for S&M fantasies. The pictures are confidently painted with a finesse that must have been years in the making but see how the composition here augments the subject, placing the victim in the middle of a noticeably larger, dark space which tells us that he is isolated from any help. 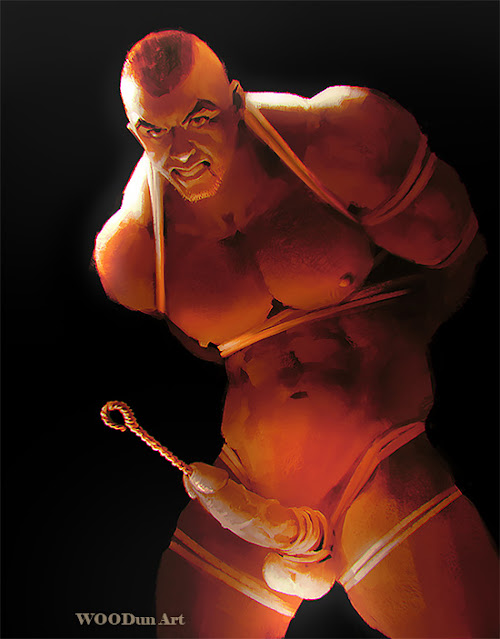 The source of the warmth is left to the viewers imagination. The depiction of the captives in many of these pictures suggest great strength but there's a hardness in the faces which seems to run deeper than the anger invoked by his their predicament. The tight cropped hair just adds to that sense of contolled aggression. It seems there are no 'goodies' in this universe. 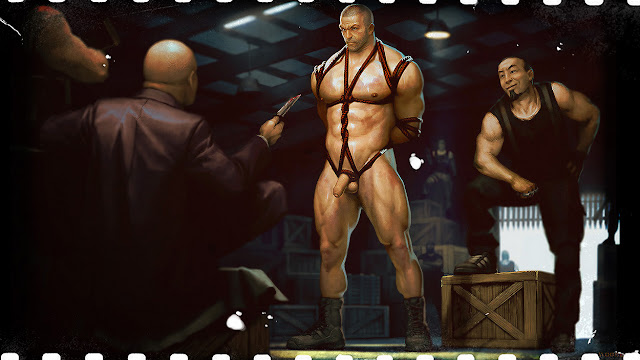 Woodunart - Dinner Meat
This image reworks the idea of gangland abduction from 'Killing You Softly'. These two images standout because they have a dramatic sweep that is almost epic. Big though the captive may be, he is dwarfed by his surroundings. The unpleasantness in full flow in the first picture has yet to manifest itself in this scene but judging by the set of the captive's face and the smile of the henchman behind him it won't be long in coming.

Like 'Intimacy' above, there's a play on that sense of the unknown danger, which the captive faces naked and unprotected. His vulnerability is brought out by such devices as the clothed state of his captors and their weapons of course. Also by his own minimal, vestigial clothing, shaved crotch and the shibari-style bondage which has been designed to draw everyone's attention to that most treasured and vulnerable part of him, his manhood. 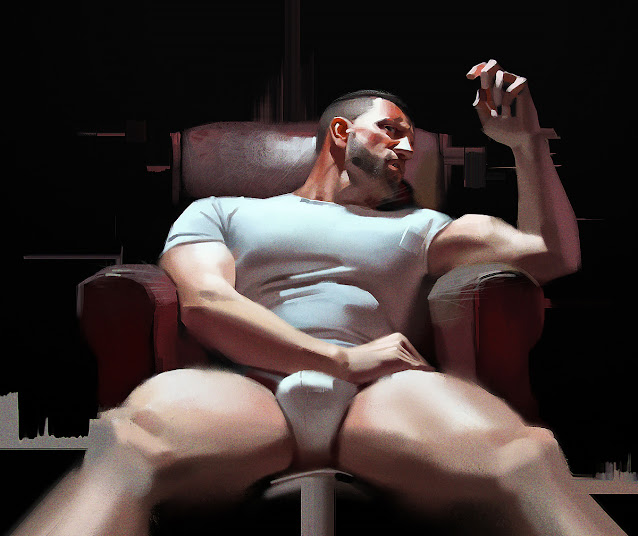 My explorations in researching these articles sometimes take me to the most unexpectedly pleasant places and Woodun Art's work is one such with studies of men like these (based on photos) which are not only attractive but succeed in capturing some singular essences of manhood. 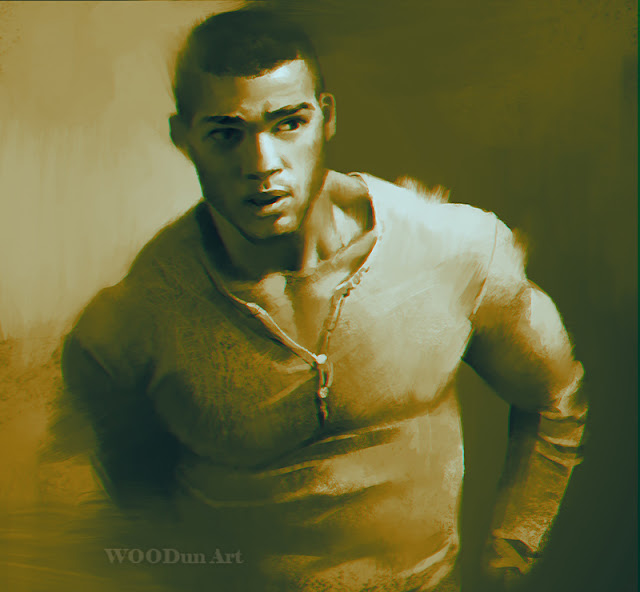 This more youthful example is softer in execution and there's a sense of uncertainty in the facial expression which is very evocative of the mysteries of becoming a man. 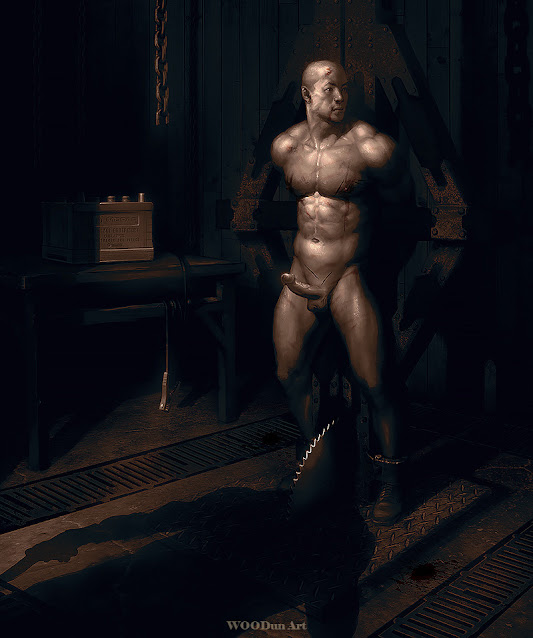 I can't explain the title of this final piece, but it's a classic 'predicament' scene where the danger is very apparent but has yet to be set in motion. Presumably the battery on the side bench wasn't up to the job. The menacing shadow in the foreground is a nice touch but the captive seems to be looking in a different direction for some reason. Like all the other victims, he's been shaved for the occasion.

This is probably quite a common S&M fantasy, with gothic origins. It's not dissimilar in intent to the (even more ancient) wedge punishment that I was featuring here a year or so ago (see wedge label below). It even featured in the James Bond 'Thunderball' movie in a slightly updated form with a laser beam substitued for the circular saw. This is one threat where the logical denoument is 'out of bounds' for all but the most determined sadist.

WOODun Art (as he styles himself) has a blog Woodunart on tumblr
with lots of masculine art, but it's slow and quite difficult to access individual images, patience is advised but will be amply rewarded.
(Woodunart on blogger seems to have been abandoned by him).

All pictures in this article can be expanded by clicking on them.

For more articles in this series click on the A-Z label below or search for specific artists using the index page or search boxes (top right)
Posted by Mitchell at 14:32

Thank you, I hope I have done it justice

I loved reading your interpretation on my work and found they are quite spot on with my intentions with each piece.

I love narrative paintings in general. Much of the violence and brutality in my work are implied as opposed to direct depiction. Personally I find this approach evokes more drama and emotion. It also allows the viewers to fill in the narratives with their own imagination.

P.S. I noticed your blog is under .ca. Which part of Canada are you at if you don't mind me asking? I'm located in Montreal.

I agree with your views on narrative in pictures and allowing viewers to use their imagination. I have a similar approach to my own 'mitchpix' drawings and my blog commentaries are intended to open up readers interest in looking more closely at images and what the artist is trying to convey. Thanks too for the Gemini explanation, I hadn't figured that one out at all. That idea suggests a whole new S&M slant on star sign images! I'm not based in Canada but the UK, it's a quirk of blogger to replicate blogs in different national domains. I try to infuse my work with British-ness but perhaps it's less obvious to our Commonwealth relatives.