His art is sometimes described as surrealist but it’s more obviously influenced by the world of ‘Metal’ Pop Music with its self-conscious irony and the modern imagery of Hollywood car crashes and explosions which is now so commonplace that it surely doesn’t qualify as surreal any more. Verlato’s art is very much in your face and visually confusing - a million miles away from the calm and bleakly disturbing constructs of the original Surrealists.

There seems to be an ill-defined political message in this picture and the contrast between the positioning of the men and women is intriguing. There’s absolutely no interaction between any of the characters here and yet there’s an obvious homo-eroticism that leaves you wanting more! I often bang on about clothing and it is very much a partner to nudity in Verlato’s art but generally baggy and devoid of suggestive moulding. Still I'm a sucker for a soldier! On the technical level, there’s a fabulous diagonal connection which links all of the characters together and it’s intersected by the gun-barrel of the tank which points the opposite way towards the object of their attention.

The Martyrdom of St Sebastian is almost an S&M cliché, instantly recognisable, even when transplanted to North America. However, the only concession to such interest here is the placing of the lower arrows and the shadow cast by the one embedded in the settler’s lower abdomen. The glimpse of 'modernity' on a distant hill-top signals another message from the artist but the near nudity of the (barbarian?) attackers seems politically incorrect however you read it. 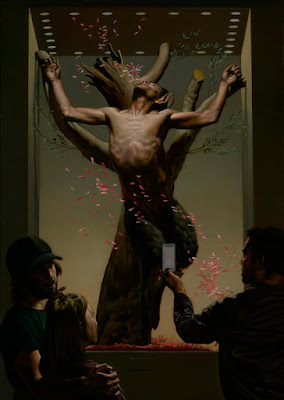 I love the ‘feel’ and tantalising subject matter of Verlato’s art but confess that its political dimensions and social relevance usually elude me (which is probably my fault not his). The technical achievement in these large canvasses however is colossal. You will find much of interest on Verlato’s website but his art is easy to find in search engines too.


For more articles in this series click on the A-Z label below or search for specific artists using the index page or search boxes (top right)
Posted by Mitchell at 12:28