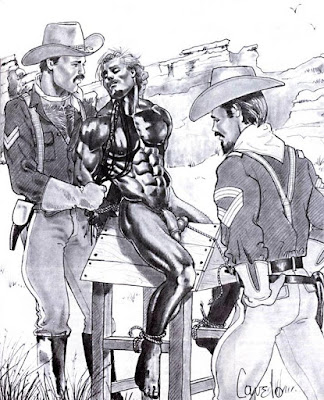 I stumbled across this picture whilst revising and expanding my A-Z article on the artist 'Cavelo'.

You don't expect to see a 'Wedge' turning up in the American Desert. It looks like the normal torments of taking a long ride on the device are to be supplemented here by simultaneous prolonged exposure to the scorching rays of the sun and with a horse whipping thrown in for good measure. This sort of cruel, extended punishment was supposed to have been practised by the French Foreign Legion on disruptive men in the ranks, but I have never heard of the US Cavalry employing such brutality against their own troopers. That's assuming of course that the naked man is 'one of them' and not some civilian miscreant they have decided to make an example of.

This four-legged wedge seems to be sturdy and well-crafted with a slight tilt to the top edge that would create an additional sense of precarious instability for the rider - and potentially painful splinters too if he slips! On the face of it, one would imagine that such an elaborate device would require regular use to justify the effort of constructing it in the first place. But I suppose, the world being what it is, it would only take one devilish mind to devise and put the thing together and anyone in authority who was impressed by it would soon find more opportunities to exploit it.

Following a similar train of thought, it always surprises me how the frontier townsfolk in Western movies, who must have been relatively impoverished communities, nevertheless build the most elaborate of timber gallows for their condemned felons, a task that would have taken them days, if not weeks and required a good deal of timber not readily available in the desert. If we are to believe what we see, they even built multiple gallows for executing whole gangs of men simultaneously, instead of making them queue up to put their necks in the single, municipal noose one by one. One presumes that once the job was done, the town spent more time and money dismantling the whole thing, since they never seem to have had one available when they needed it again.

For more on this artist visit my updated  A-Z article on the artist 'Cavelo'.
Posted by Mitchell at 12:31