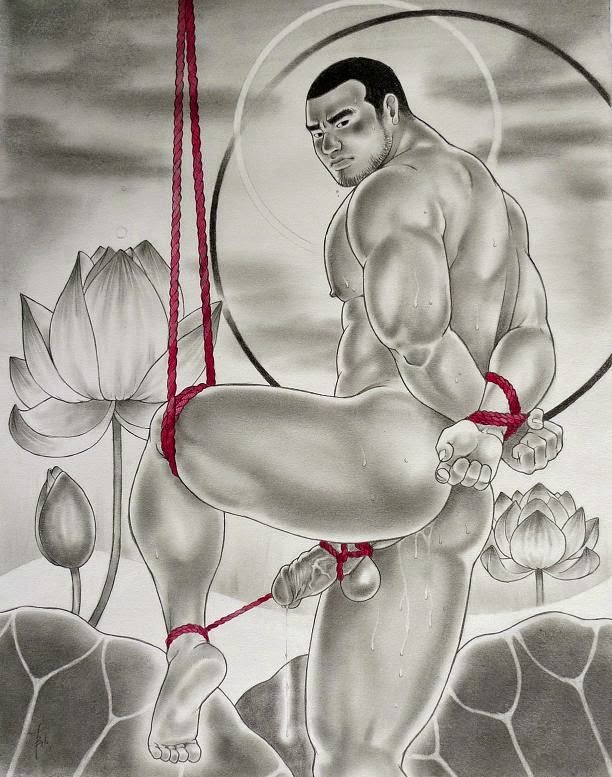 There was a flurry of interest in Tatsuya Naoki a couple of years ago when these pencil images showing smooth, chunky men bound in red ropes first appeared. I think this is the best of that group, portraying some serious bondage – you may have seen the single leg position in Bound Gods work, but in those videos the weight of the body is supported by a secondary harness, this guy has to rely on balancing on one leg, which over time becomes increasingly difficult, particularly if you are also forced into energetic sexual activity as appears to have happened here. The dripping fluids are a salacious detail, but also add a time dimension to the captive's predicament, the expression on his face suggests he has now had enough.

There's a slightly self conscious artiness about the juxtaposition of sex bondage with imagery from Nature, but to the Japanese eye these are not mere decoration. This bondage position itself imitates the one legged stance of the crane standing in water, in Japanese culture cranes supposedly reward sacrifices with luck and also represent longevity. The water lily (or lotus) is sometimes associated with cranes and denotes purity (!) and rebirth, so you can see a sort of message, but I imagine it's rather more subtle than that and I won't pretend to know. 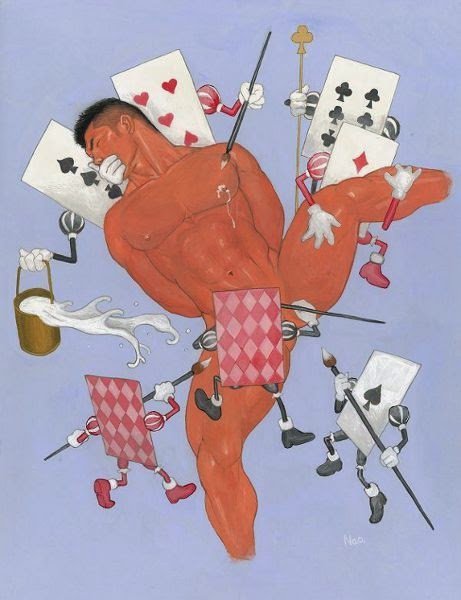 This picture couldn't be more different with a sleeping(?) young man under tickling attack from a collection of Disney-esq playing cards, all armed with paint brushes. I think it's the first time I've featured tickling fetish in this series and I confess the hand-gagging and suggestion of wrist bondage appeal to me more. There's something slightly sinister about the faceless playing cards (even in Disney's film) and here the pointed brushes, look like - and are wielded like – spears, angled towards erotically sensitive zones. The dreamer's legs are held wide open and the playing card between them, clinging to his thigh, obscuring his organs but doing who knows what to them seems the height of erotic suggestiveness to me. The Japanese, wave-like styling of the sploshing white paint is a delightful detail.

In the previous picture I was tempted to point out parallels with the art of Hasegawa (e.g. the skin toning and symbolism), but the depiction of the youth in this image seems even more reminiscent of that much missed artist. 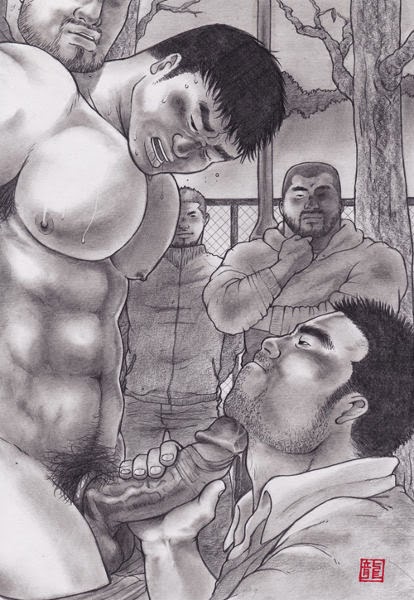 'Beard Attack' is much more down to earth, featuring more rugby-style chunkies indulging in a teasing torture/fetish that many of us will have experienced in some form but is rarely the subject of any artist – the stubble scratch. This young man seems to be appreciating it, judging by his splendid, moist erection, but his grimace suggests a more plausible emotion. Being Japanese, his nudity in a public place adds a significant modesty/embarrassment ingredient to the ordeal, underlined by the fact that everyone else is clothed and clearly not intending join him in with his nakedness. In fact they are well wrapped up and the trees are almost bare suggesting it's a cold, autumn day. Not ideal for exposing yourself.

This attack seems to be mischievous rather than nasty, perhaps a group of boisterous rugby players, lubricated in the club bar have stumbled across this young man up to no good in the bushes and are tutoring him in their version of what constitutes manhood. The ultimate straight boy tease, but there's always the hope that it's going to turn into a Baked Alaska moment (cold cock -> hot mouth) Whatever the case, it seems that the limits in this scene are not going to be set by the naked victim.

The facial expression of the man doing the scratching (with a touch of determined wickedness in his eyes) and the thoughtful on-looker, twiddling his own beard inscrutably are both nice little studies, well observed from life. The background itself is styled in a neat and tidy way that is very attractive and it is also nice to see that Tatsuya's men are uncompromisingly Japanese and modern. 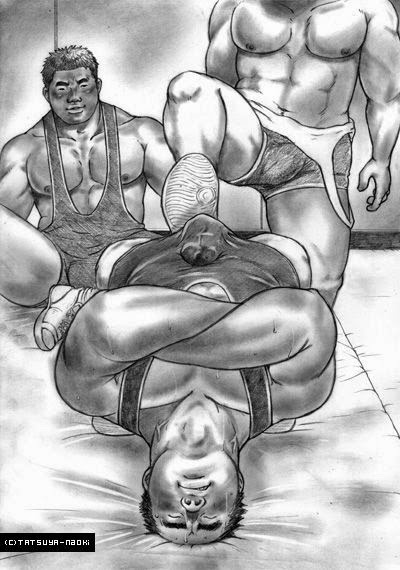 This image connects back to the ball-busting images of Tam, but it's much less violent, more squash than smash, a manly test of endurance rather than an attempt to injure. This is 'rough play' like 'Beard Attack' but there seems to be no malice at all here. However there's a lot of eroticism bubbling under those highly revealing leotards. The pose of the central figure, arching back with his feet bent back underneath him is very sexy, this viewpoint doesn't really do it full justice but the crossed arms detail looks so right. Even better is the background figure administering the foot pressure. The dangling arm and the slightly leaning body posture completely capture this tricky balancing act and for me there's also something unmistakeably masculine about it, I look at it and think, yes, that's exactly how a man looks. It's a delight and an artist that can capture this 'essential manliness' is to be admired. 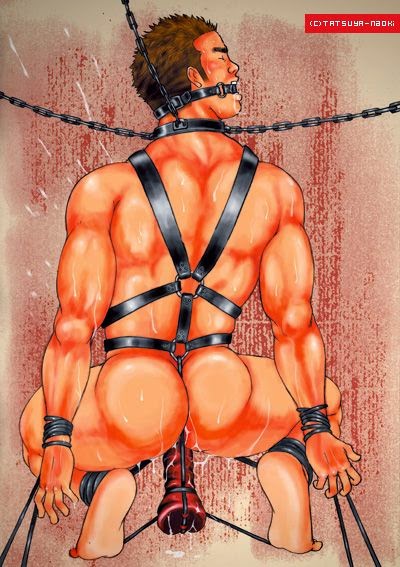 5
You want fetish? This image is less convincing than the others but the artist captures the discomfort of the gag as the captive averts his face from the improbable shower of spunk raining down on his body. The hedgehog haircut seems slightly incongruous, more clubland than dungeon, which perhaps explains his slightly pained expression, as though he's dismayed by the coarseness of it all. There's another, similar picture by this artist featuring a mask and unconventional use of a screwdriver (see links below). 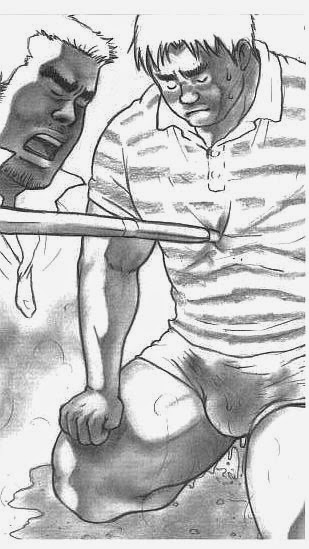 6
My final example is a quirky one, from a larger group about a rugby player being ritually humiliated. In this scene he is forced to piss in his own shorts and I've included it because it's a scenario that interested me at one time and I don't think I have featured it here before. However it's fiendishly difficult to make into an erotically exciting image since all the main action is hidden, leaving the artist to depict wet fabric/skin and dribbling liquid – not very easy. I suppose this attempt proves the point.

Tatsuya's work does not explore the dark realms of fetish, but there's often a touch of the sinister - even in good humoured pieces, the non-fetish work is a little bland for me. His best art is sensual and stimulating and he has a knack for pleasing detail. There's a selection of his work at the Japanese Gay Art site and (censored) at his blog Absinthe (there are more pictures in the older posts)

For other articles in this series click on the A-Z label below
or seach by name.
Posted by Mitchell at 12:15

I like his work. Your discussion of the first picture was so well done, it led to longer looking at it. The two mounds at the bottom look to me like turtle shells. The turtle is another symbolic animal in Japanese culture.

The turtle is associated with longevity and wisdom (!). But also with protection. Part of the magic of turtles is to bring heaven and earth together - the dome of the sky is the shell's top; the bottom of the shell is the earth. Is he protected from falling since he stands on the turtles?

Finally, there may be some word play going on here. The word for the glans of the penis is made up of two words: turtle and head.

Thanks for this excellent contribution. I must say I thought the mounds were lily leaves, but the cultural information on turtles is very welcome regardless.