Syd Wheels is one of the originals, his spanking images are somewhat similar to those of C of Sweden, surprisingly so given the contrast in styles, Syd is a cartoonist, C more academic in his approach. But they seem to go for similar subject matter for inspiration – notably uniform situations and historical costume drama. 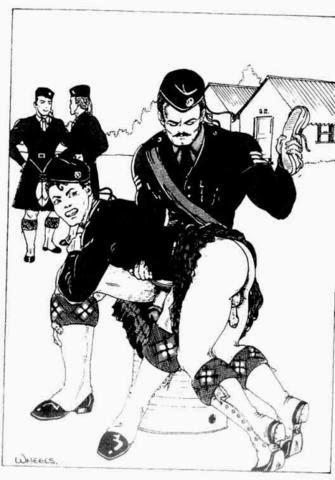 Syd - Scottish Spank
This piece, autographed Wheels instead of the usual Syd, has a marvellous retro feel in the realist style of vintage magazine illustrations. I don't know if Syd was a Scot or a soldier, but the uniform detail looks highly authentic and the soldier on the receiving end conforms to the manly Scottish tradition of wearing nowt beneath his kilt. Despite this, there's a distinctly feminine air about him - details like the kiss curl, the shaped eyebrows and fulsome lips. Syd seems to be borrowing motifs from female glamour to suggest a nancy boy, a concept from a bygone era. Dare I say he might even be mocking the masculine credentials of the kilt? 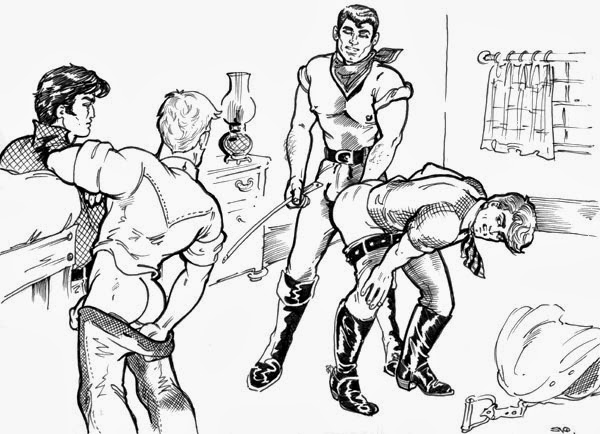 Syd - Cowboy Law
I particularly like this 'cowboy law' scene, supposedly in the bunkhouse although it's hard to imagine these dudes, with their artfully tied neckerchiefs and swanky shirts, bunking up with the other rough men. It's the posh togs that make this picture work so well, privileged young men brought down to earth with a whack,and how the foreman seems to be enjoying sorting them out!The foreground figure consoling himself is excellent. 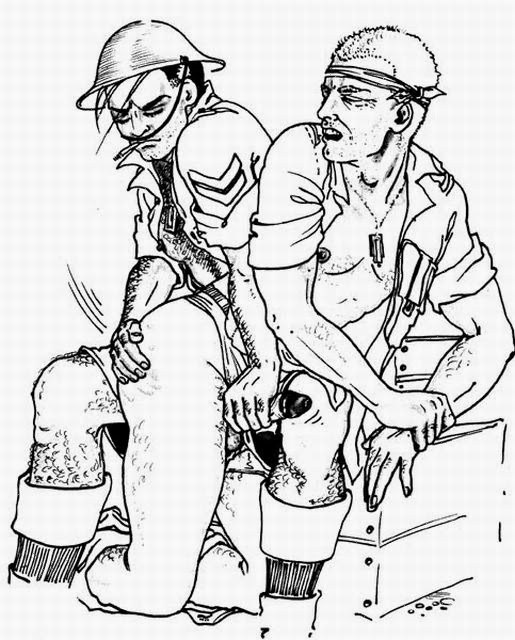 Syd - Desert Rat Spanked
In my youth, the 8th Army, 'Desert Rats' in their shorts were a source of manly inspiration for my homoerotic fantasies, but this final picture is one I never dreamed of, a Corporal spanking one of his charges whilst simultaneously jerking him off. I'm not 100% sure this is by Syd, but the face of the spanker has similarity to the first picture and once again there's an authenticity about the uniform that suggests familiarity on the part of the artist. Notice also the trace of feminity in the spanker's eyelashes and the hands of the man being punished. Syd doesn't quite make the spanker's impossible left arm action seem believable, but the hunched up pose as he twists round is beautifully captured.

For earlier articles in this series, click on the A-Z label below
or search by name in the masthead box
Posted by Mitchell at 08:09

All three are by Syd:I knew him in the 1980s,when he drew for 'Sir' mag.He wasnt in the miitary. I have some of his unpublished art and a much loved Christmas card

Thanks for this comment Speedoric, Syd is an under-rated artist.