Ira Smith's work is based on classic figure drawing of the highest order, combined with a keen sense of style which gives his work 'hang it on the wall', artistic credentials. This is not to say he holds back on erotic content though and in 'bondage pair' two athletes are secured in a humiliating, kneeling position, displaying their naked asses provocatively through the bands of their jockstraps. There is something very sexy about buddies being captive together, the identical poses and clothing in Ira's picture play on that theme, although the details of their bondage differ for some reason. One can imagine these lads looking on helplessly as their team-mates are taken, one at a time, then stripped and bound to join them. 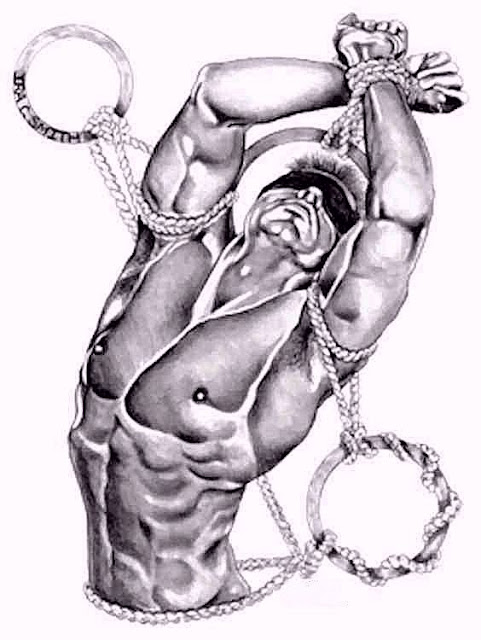 Ira C Smith - Ringz
Ringz is an arty treatment of a classic punishment pose, the imaginative floating rings help to create a dynamic impression of struggle and comprehensive restraint. By omitting the engineering details, Ira is free to home in on the taut, arched body. He uses dark shading to emphasis the highlights and valleys of muscle definition in almost photographic detail. This technique runs the risk of 'breaking up' the subject's body and losing the sense of bulk, but the white background mitigates this effect. The rope looped round the waist and the blindfold give the image an extra, little erotic kick. Notice the halo-like effect of the central ring, the captive's head seems to be pushing through it, noose-like. The subtle symphony of winding curves, continues bottom right, in a pattern that seems to capture the snake-like sensuality of bondage rope, while simultaneously suggesting celebratory garlands. This decorative quality suggests the captor has complex motivations! 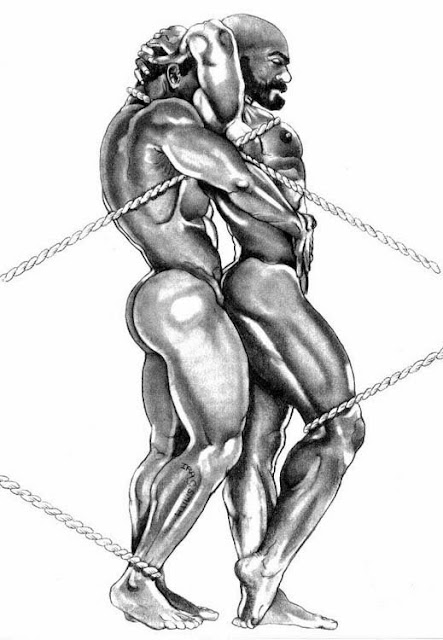 'Connected' cleverly weaves bondage ropes around two men (refreshingly mature), who are locked in an embrace which might be wrestling or love making. The discreet, downward pointing hand on the stomach gives a clue to deeper intimacy. With it's tasteful nudity and geometric balance, the composition is artistically pleasing but also unexpectedly sexy. The ropes seem to be simultaneously pulling the men together and apart and controlled by hands unseen, which gives the piece a manipulative overtone and imparts to us a tingling, voyeuristic quality. Connoisseurs of 'hidden eroticism' (see label below for more) can visualise what may ultimately be revealed by the two lower ropes, drawing aside the mens' legs, like the opulent curtains of a theatre. 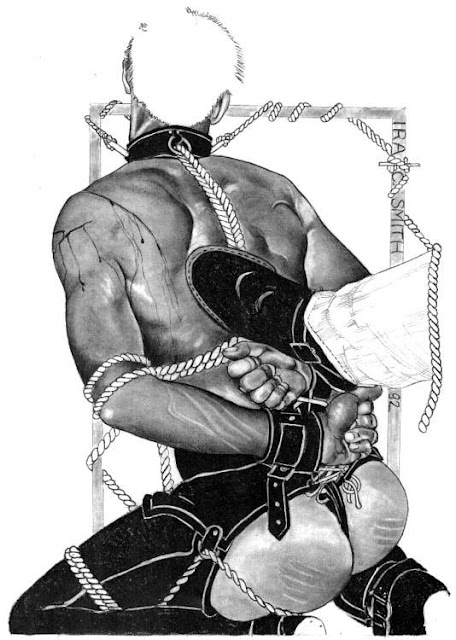 Ira C Smith - Tied and Abused
Despite a similar, arty style, the content of 'Tied and Abused' does not hold back at all from fetish expression. It is evident that the kneeling captive has been spanked and some lash or other implement has drawn blood. A brutal foot urges him in the direction of an ominous square frame. The rope-work looping round the captive's body is particularly prominent and sharply defined. It continues, winding round the frame in similar manner to Ringz above. In a curious trick of the eye his collar is actually already attached to it. In this picture the darkly shaded torso is contrasted with starkly white or line-art only areas, such as the hair and clothing, it's a favourite technique of this artist. The artist Cavelo uses it too, in order to differentiate characters in his drawings and if you consult my A-Z article on Cavelo you will see the similarities do not end there.

The quality of Ira Smith's art speaks for itself but it rewards fetish enthusiasts who linger longer. You can see more of his work and buy it at the Ira C Smith website.

For previous articles in this series click on the A-Z label below
Posted by Mitchell at 16:27