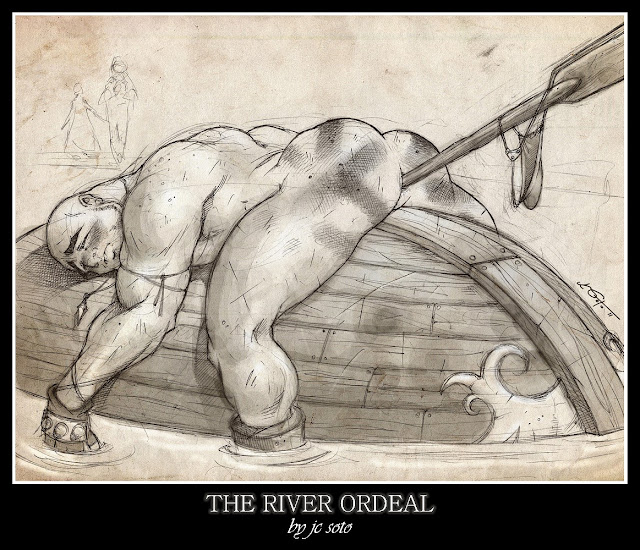 Soto - The River Ordeal
Soto usually depicts fantasy beasts being beastly to each other, as in the HellBoy stories, which is not my normal stamping ground for this series. He also uses computer assistance in finishing his work but I'm giving him a mention for his human drawings. This sketch of a man who has just been spanked with an oar over a upturned boat certainly qualifies as fetish art. I love the designer G-string dangling from the oar as supplementary evidence of his humiliation. 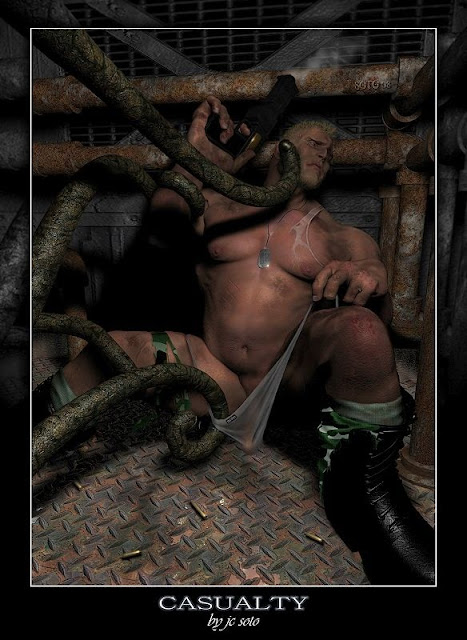 Soto - Casualty
Underwear removal is the focus of 'Casualty' too where a burly soldier is being rip-stripped and felt out by an inquisitive and seductive tentacle organism. The spent cartridges on the floor suggest our man is out of ammo and instead of going down fighting, he is taking the line of least resistance, preparing for the inevitable 'ending' with as much courage and dignity as he can muster. He has helpfully assumed the bog standard, open legged, sitting stance which seems mandatory for tentacle rummaging.
As tentacle images go, this is beautifully understated and manages to suggest that such creatures have more discerning sensibilities than one would have guessed from the countless images of aggressive orifice filling, supplied by other artists. The warrior's face turned aside in passive revulsion is fabulous. I suppose the mothers of soldiers, like all mothers, advise them to change into clean underwear before battle (in case of accidents) but this chunky warrior's panties are surprisingly flimsy and provocative, scarcely concealing his own little 'tentackle', it's a nice touch of human weakness. Soto's fully coloured images are beautifully crafted and textured. The murky lighting and indistinct detail is not unusual in his work, it's highly atmospheric, but frustrating at times. 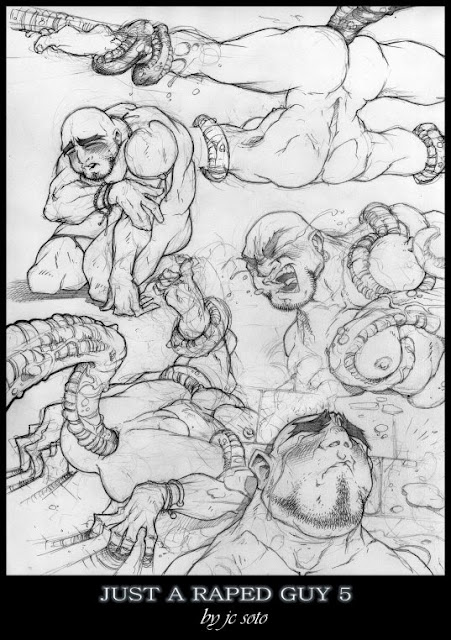 Soto - Just A Raped Guy 5
The final image is a group of sketches that explores the multifunctional abilities of tentacles to coil, restrain, pull, squeeze, caress and probe the human body. They work well as a group and the simplicity of the individual sketches is more effective than a single complex drawing which tries to show dozens of tentacles with everything happening at once. His tentacle imagining is quite interesting but there's also some nice body sketching here, I particularly like the man's stubble detail (bottom right)

See more at The art of J C Soto, if you're image searching, he also uses the name 'HellBoy'

For earlier articles in this series click on the A-Z label below
Posted by Mitchell at 09:59