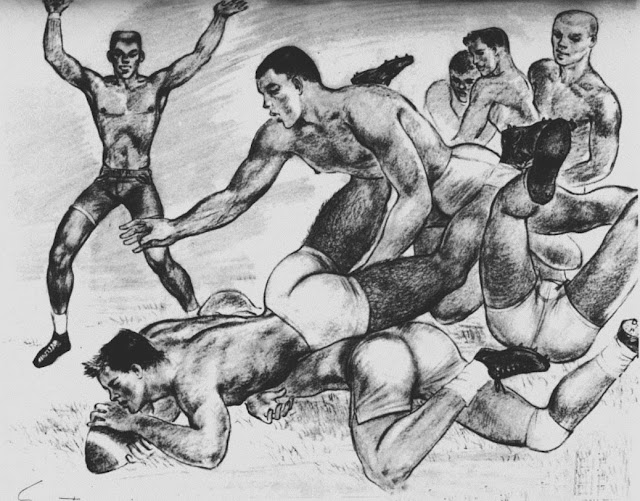 Spartacus was a prominent artist of the 60's known for depicting young men at play. It's mostly decent stuff on the surface, but with suggestive overtones and details for the intended gay audience. Tight shorts and bare bottoms feature prominently and some of his bulging jocks have pretty unambiguous shapes.

In 'Ball Game' there's more than a suggestion of illicit groping, centre stage, and those tight shorts and hairy thighs look just as good today as they must have done 50 years ago! I imagine the accompanying copy would have included arch references to 'tackle' and 'diving'. If you think this is not a fetish picture check out juxtaposition of pointed studs(!) and buttocks, bottom right.

That glimpse of elbow between the upturned legs suggests more interference going on and the three guys at the back look as if they are up to no good too. The tackler's outstretched hand grasping suggestively between the background figure's thighs is a more subtle, conventional 'hidden eroticism' but Spartacus is definitely pushing the envelope here.

(Click on the label below for other examples of hidden eroticism). 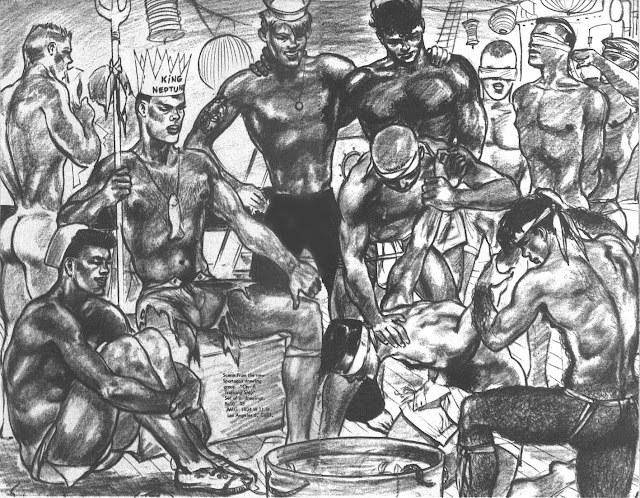 Spartacus - On A Training Ship
My second picture, showing a 'crossing the line' ceremony, gives a glimpse of what might have been (and possibly was in the artists unpublished work). A series of young men are tied up and blindfolded before having their heads dunked in a bath full of crabs and eels, which has been placed at the feet of 'King Neptune' so that he might enjoy their humiliation.

The bulk of the picture is taken up with conventional 'boy physique' imagery, somewhat in the style of Scott-Tuke, which gives the piece an air of youthful innocence and adventure. This probably made it more acceptable naughtiness in it's time, but paradoxically the reverse applies today. The clothing details are revealing, ripped shorts and some fairly racy open flies and scanty thongs – not to mention another pair of 'in yer face' hairy thighs – reassuringly adult.

Spartacus' boys often have an Oriental or Polynesian appearance, it's a useful identifier for his work. 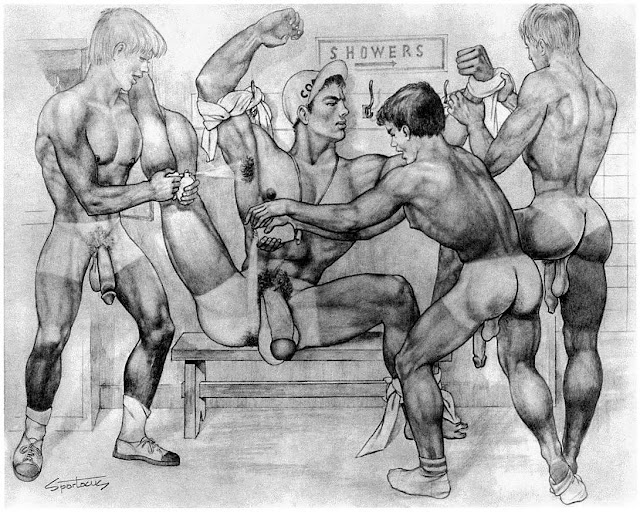 Spartacus - Shower series
The final image comes from a more explicit era and the artist is clearly revelling in his freedom with a mega-oversized organ. I don't know quite why the young coach is being restrained while being simultaneously pampered, but there's a companion piece in which he spanks the lads and you can see visual evidence that this picture follows it in the sequence. Perhaps he's being tricked and prepared for revenge.

The atomiser is delightfully camp but quite suggestive if you think about it, likewise the talcum powder, which would need amazing properties to reach it's intended destination. I love the detail of the boy's hand gently tapping the canister to promote pouring. This imagery recalls an advertisement of the era in which salt is sprinkled on a chicken's tail as a prank.

The quality of this last drawing contrasts markedly with the earlier pictures, although those images have probably suffered from the limitations of '60's magazine printing (and later scanning) and were surely much better 'in the flesh'. This later style suggests to me an acquaintance with Harry Bush's work (or vice versa!). Oh, what treasures have we lost?

I haven't found a decent site for Spartacus' work but it turns up at art groups and vintage photo sites, there's a selection at this gallery which includes most of the images I know of. Information about other work is welcome.

To see other articles in this series click on the A-Z label below
or search by name in the blog header bar.