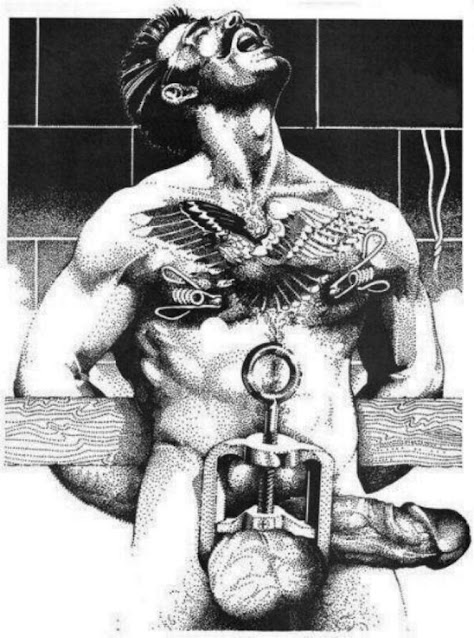 Rex - Clamped
Slightly out of alphabetical sequence we arrive at Rex, whose accomplished hand has graced our fetish world for 30 years or more. Having said that, you won't find much S&M play in his pictures, this clamp picture, in which you can feel the pain of those vicious devices, is a relatively unusual subject for him. The dark, pointillistic style is Rex's trademark. The subtle depiction of the abdominal muscles and veined arms is marvellous. His pictures are always full of interesting details, like the stylised backswept hair and the gleaming ring of the screw clamp. 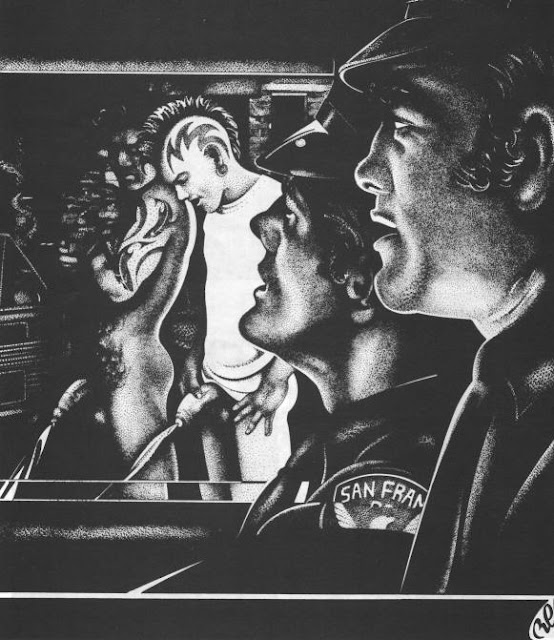 Rex - Traffic Patrol
Rex's men owe something to Tom of Finland, like these cops with their square jaws and fleshy lips (maybe a touch of Etienne too in the snub nose). The Mohican-styled street yob fouling the pavement and due for a comedown also has echoes in Tom's later work but it's the man in the shadows who is true Rex with unkempt hair, pugilistic nose and smoking cigarette in his hand, rough and dirty, probably with sexual manners to match.
This atmospheric composition is much more sophisticated than Tom's work but has the same story-telling power, your imagination can run riot visualising what will happen next. Rex's pictures look completely different to Tom's because of his style and use of dramatic close-up.
Search out copies of his pictures which have not been 'sharpened' by those collectors who don't like the 'fuzzy' appearance - it destroys the feel of the picture. 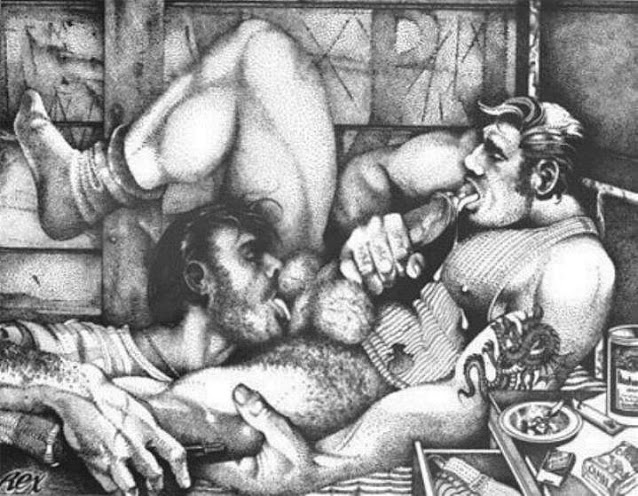 Rex - Lickin'
Rex's pictures typically show sleazy, sexual encounters in rough and ready settings. Leave the gymnastics aside here and you can almost smell the odours of lust and sex in this encounter and you just know those uplifted socks are pretty smelly too. The incidental detail - torn vest, tattoos, stubble, cigarettes, beer can and glimpse of jockstrap in the draw all create a powerful sense of masculinity let loose. The backgrounds are equally precise but sometimes it's maddeningly unclear what exactly they are. Sometimes the perspective appears flattened, creating a crowded, compressed and claustrophobic effect. 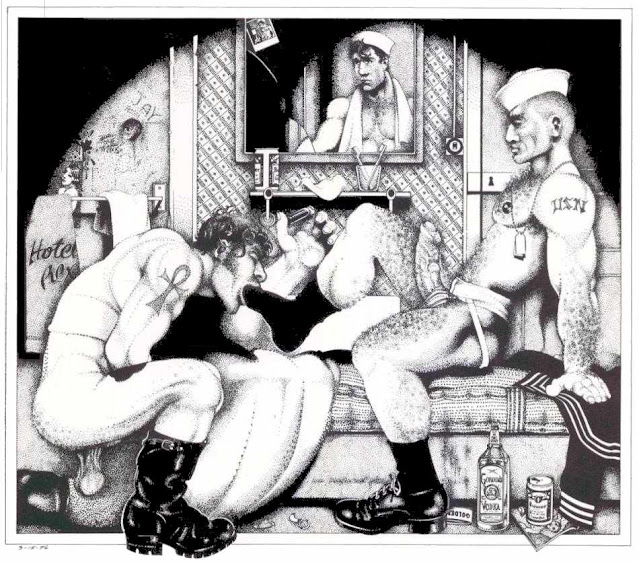 Rex - Hotel Rex
This picture springs from the same inspiration as the cubicles series. In a sleazy hotel room a biker kneels and feasts on the sweaty, sock-clad feet of a tough-looking sailor who reclines patiently, in control and already up for more. The vial in the biker's hand is probably poppers pointing up the intensity of his moment.
In the mirror we see the mysterious reflection of a second, younger sailor who looks just out of the shower. It's not clear if he's disinterested, shocked or maybe he's just bored waiting his turn. He could even be looking at a fourth unseen man.
The characterisation of the three men is all quite distinct and sexy in different ways and the detailing of the sleazy, hotel room is just astonishing - note the two toothbrushes telling us that two men (presumably the sailors) share this room. 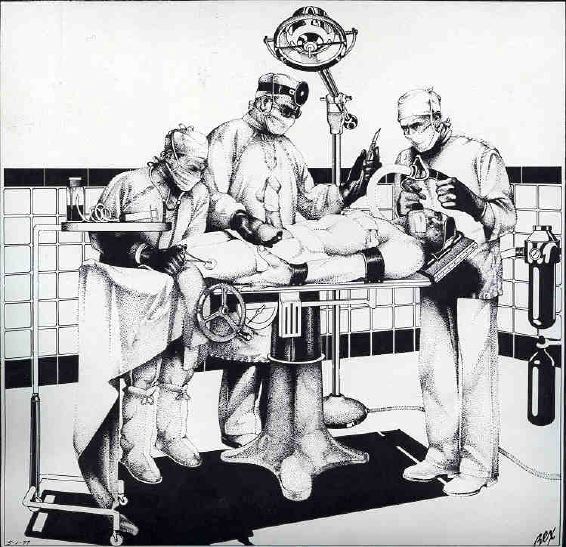 Rex - Operation
Medical fetish art is something of a rarity so I had to include this group of authentic looking doctors carrying out a highly unorthodox operation on a captive, gagged patient. Not for the faint of heart, perhaps, the surgeon is literally weighing up his options, but it's a logical, if nightmarish, extension of the Doctors and Nurses control fantasy. Rex has a penchant for going just a bit too far!
In this picture, the patient's anatomical proportions are not strictly observed - he has rather short legs. Oddities like this occur in other Rex pictures too (see lickin' above). It's surprising given his sophisticated technique and carefully crafted detail and suggests to me that passion sometimes plays a major part in the creation process. 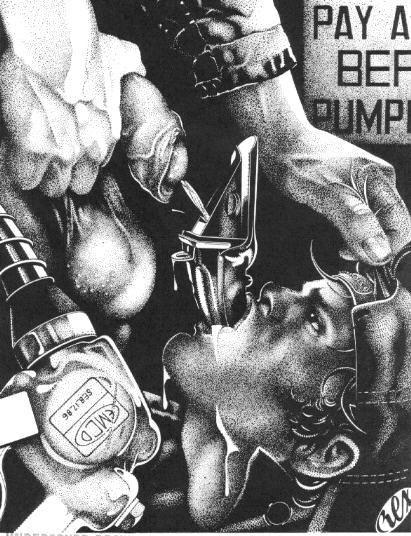 Rex - Pay Before Pumping
Finally, a fairly well-known picture that combines great artistic technique with off the wall fetish. The young grease monkey's mouth is held open by metal tubing stuffed down his throat. It looks to me like a petrol pump nozzle or a bike exhaust fitting but I don't mind being corrected on that - see comments below. What's indisputable is that he's being forced to drink body fluids mixed with goodness knows what residues from the improvised funnel. The dramatic lighting and amazing snatches of incidental detail (have you ever seen bollock gooseflesh depicted before?) make this a memorable and highly erotic image.
~
There's another great picture by Rex at mitchmen blog in Classic Homoerotic Images - 1
See also mitchmen A-Z of Fetish Artists - Zach
and mitchmen A-Z of Fetish Artists - My Favourite 'R'
The Legend of The Path of Pain also at mitchmen blog
plus In Praise of Sailors -17
~

I don't need to talk up Rex, his artistic credentials speak for themselves. His fetish imagery, full of subtle nastiness and power plays between men, is always exciting and interesting. There are two further important areas of his work concerning animals and intergenerational relationships which I have not discussed here because I don't feel they are appropriate subjects for this blog. However, I will say that his slant on these two taboo subjects is worth investigating.

His work takes a bit of finding. He now has his own a site at Rexwerk with some examples. There is also a collection at Delftboys (if you can penetrate the maze) and as always Pax's GMBA archives (see sidebar for link) are a rich resource.

For other articles in this series click on the A-Z label below or use the search box to find a specific artist
Posted by Mitchell at 10:44

It's an oil can spout.
I can still remember when you got your oil in 1 quart cans instead of plastic bottles.
The end that the top is pissing into is the end that was punched into the top of the oil can, then you tipped the spout into the engine to pour the oil. (But it does look a whole lot better pushed down the boy's throat.)

I'm not sure we had that arrangement in the UK but the shape does look familiar - perhaps from hours spent studying this picture! The gleaming finish is presumably artistic licence.

I think the ends are the reverse of what you're describing. The pouring spout has become the receiving funnel, which makes perfect sense if you think of the gas jockey throat as needing a 'lube job' before the top's piston goes into action.