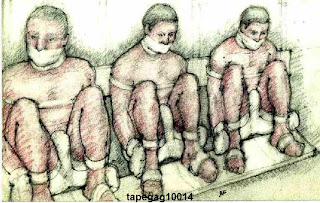 This rather striking piece of bondage art is by an artist called RF. Group (or buddy) bondage like this, where each captive is restrained in the same way is quite an unusual subject. It suggests that their captor must be extremely powerful and well organised and therefore to be feared. The inability of the men to work together to free themselves gives a twist of shared frustration and humiliation, it's different to solo bondage where the victim's isolation from any help or consolation provides part of the thrill. I like the morph-like faces which do have individual characters but seem to have been 'harmonised' by their plight and of course I love the (identical) shorts with their (identical) intriguing bulges. I suspect we're talking control here. 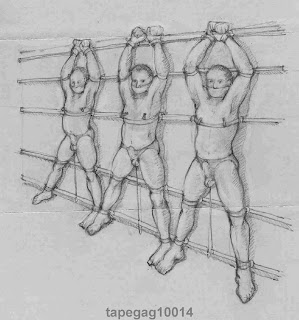 Three more captives here, secured by curious horizontal strapping passing through loops embedded in the wall. It's a standard bondage image but again enhanced by the identical group punishment perspective which will seek out the weakest. This time they are wearing underwear but it doesn't leave much to the imagination, which I would have preferred. The men's bodies are not idealised, it's the situation that supplies the eroticism. 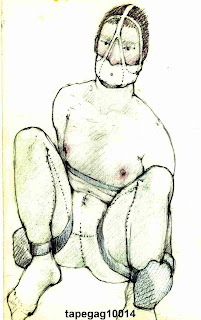 The final picture is a solo pose. I love the dotted seams which tell you that he's wearing some sort of long john's or tights which also cover his feet. This sort of garment, which is enclosing and shape revealing, but not normal wear, applies a subtle layer of control to the captive's lower body. The seams draw your attention to areas of interest, like the line diving between his buttocks and the criss-cross thread seemingly holding his bulge in check. It's all nicely understated and the simplified representation of the face allows the businesslike gag to come to the fore.

I would welcome information on RF from readers.

For other articles in this series click on the A-Z label below or use the search box to find a specific artist
Posted by Mitchell at 11:17