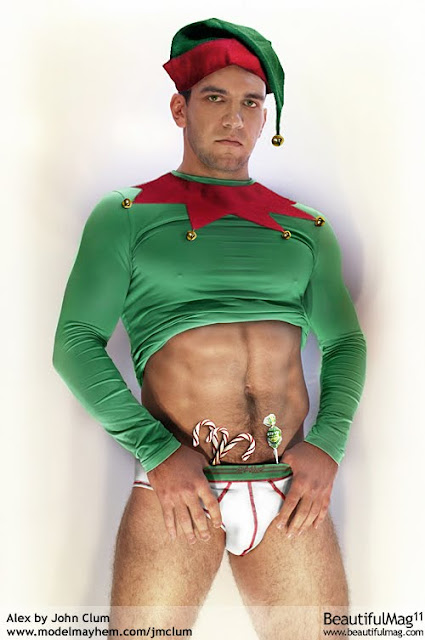 In the media world August is usually reckoned to be the silly season but Christmas is tops for silly hats. Alex here is one of Santa's elves and he looks very happy about it doesn't he? Whether it's the long working hours, the sticky rock down his pants that's to blame or the outfit he's had to put on I don't know. To be fair, John Clum, the photographer, describes this (group of pictures) as Christmas satire, which licences just about anything I suppose. Fortunately, mitchmen folk enjoy seeing a manly-looking man put in his place, especially one who clearly has a very sexy body. That clingy top is very flattering and, surprisingly, so is the star shaped collar, but the droopy hat - oh dear.

You wouldn't imagine that the picture above, by Eden Photography, is the same model.
So cute! I feel quite guilty for enjoying his discomfort now. (Not really). 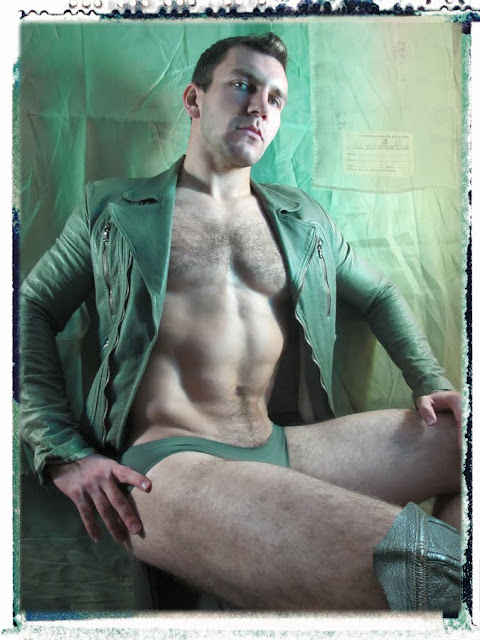 This image by Orlando Vivas evokes emotions of an entirely different nature,
Alex's nicely sculpted body is showcased beautifully by the olive coloured clothing.
It's a shade that I find very sexy on some models. I don't know whether it's down to the way it complements the skin colour or perhaps the military overtones.

Cynics may think it's just the plunging cut of those splendidly-elasticated underpants and they could be right. Oddly enough this picture also reveals elfin-like qualities in his face which completely vanish in John Clum's Christmas picture. Never mind, if you check out John's listing you'll find plenty of interesting and sexy pictures of Alex and other models.

My thanks to him and other photographers featured here.


For other posts in this series, click on 'hats' in the label list below
Posted by Mitchell at 10:17