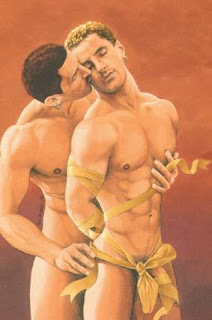 I didn't expect Paul Patterson to figure on my list of fetish artists. I enjoy his humourous 'chocolate box' beefcake, his sensuous depictions of very handsome men. But a man tied up in silk ribbons doesn't really count as fetish, although I must admit this 'moment of release' is sensitively painted and full of resonance for most gay men. 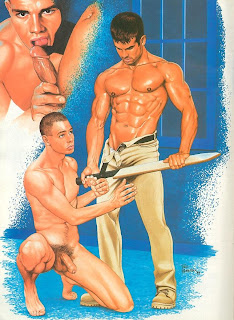 The second picture features quite a mix of not very subtle erotic symbolism, a remarkably handsome man holding a cricket bat as though it were a sword being unsheathed, his dangling belt (!) end is being tugged by a naked companion who kneels submissively, with his other hand hovering at thigh level. I've spoken of the potent symbolism of the kneeling servant in my Royale articles but there's also a sense of connection here to renaissance art in the slightly awed, devotional facial expression and the hand reaching out as if in blessing. This character could easily fit in amongst Michaelangelo's supporting cast of angels. It's also possible to read this scene more fetishistically (if there is such a word!) as a frail prisoner imploring his guard for mercy - it's not cricket, chaps! 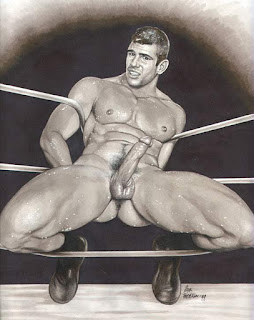 Paul Patterson - On The Ropes

The Boxer on the ropes is another mildly fetishistic subject, suggesting sweaty humiliation and subjugation. It's a clever adaptation of a kneeling pose and who could not enjoy that restained muscular body and confused expression? 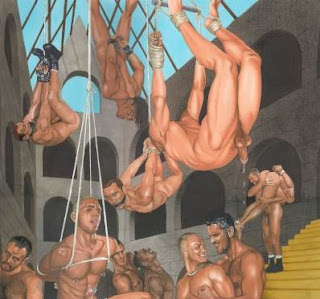 The final image is a detail from a larger picture, captive men are carried in over the shoulder and suspended in bondage from the ceiling, dripping with excitement. You can access the full picture at the website below.

The quality of Paul Patterson's imagery speaks for itself, although one of the pitfalls of the beautiful, near photographic finish is that 'the joins' between different picture elements are harder to conceal. Nevertheless a great gay illustrator with very acceptable fetish credentials.

There's an extensive gallery of Paul's work at DelftBoys