Palanca is a prolific producer of imagery that primarily celebrates the worship of men's feet. This picture epitomises that fetish, the worshipper has even used a knife to access his object of desire, a hint of 'edge' that is not untypical of Palanca's work. As a 'clothes man' I love the Long Johns here.

His work is often executed on paper designed for another purpose or on what appear to be the inside surfaces of opened out cardboard boxes where you can see the folds running across the picture (see below). He often uses caricature and grossly exaggerated features that sometimes 'out-dick' Tom of Finland at his most unsubtle. Nevertheless, Palanca's pictures are often intensely sexual and, in a strange way, very real. 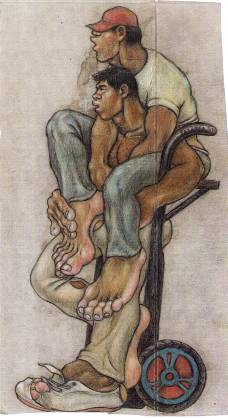 I have described his celebrated 'feet' predecessor, Etienne, as being able to depict feet that are more foot-like than the real thing. Palanca celebrates their clumsy, bony oddity, humorous rather than beautiful.
.
He has an uncanny ability to portray the essence of the Latin male in both appearance and personality. Good natured humour pours out of his pictures of smiling men, affectionate cameos of friends and depictions of playful couples like Kart boys above which must contain the subtlest groping ever!
. 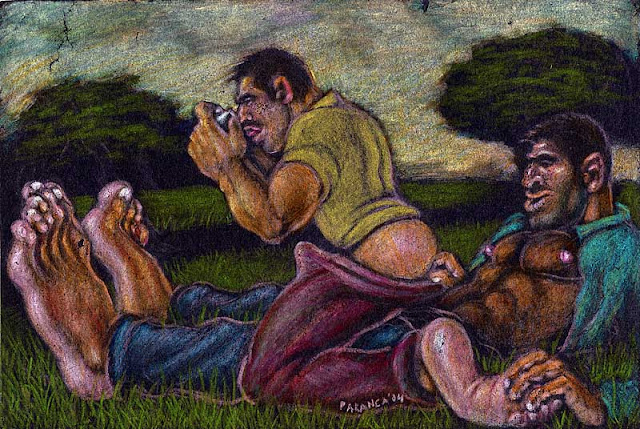 Palanca - 'Foot photographer'
.
'Foot photographer' is pastoral in atmosphere, the childlike concentration of the photographer is mirrored in his buddy's fascinated exploration of his ass,while he affectionately squeezes his foot. The rich colouring and the treatment of the trees in the background shows a cultivated technique reminiscent of an old master painting and this theme continues in 'The Night Vincent Died' (below) where the background is a fascinating pastiche of Van Gogh's cornfields ,which tells you we are dealing with an intelligent and knowledgeable artist. 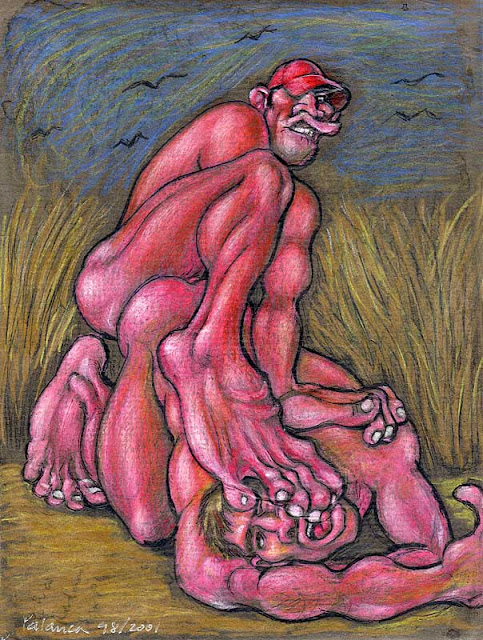 Palanca - The Night Vincent Died
This picture shows a different side to Palanca, a rough encounter where the interest in foot worship is not necessarily mutual. The awkward angling of the limbs in this composition, which expresses the aggression so well reminds me of the work of Neil Bruce. Van Gogh's circling birds take on a sinister air. 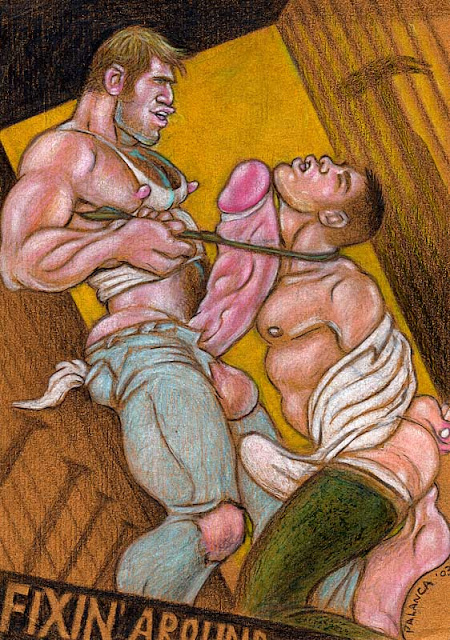 The boys own tool strains against his underwear as his captor's extended foot explores his bare ass but this detail seems almost incidental. This slanting composition is beautifully put together, the angled walls imparting a tremendous sense of upward motion where the men come together. Further wildness and drama is provided by the billowing fabrics and shadows of carpentry tools.

It's a complex picture and I confess I have no idea what the title really means. 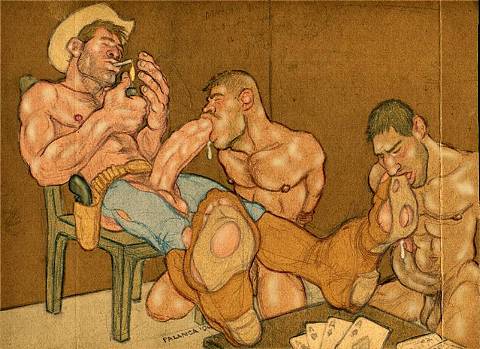 Any artist wanting to depict feet as a fetish will want to place them in the foreground like this and Palanca's execution of the tricky perspective involved is skilful and convincing. There's another example of that in the next picture. 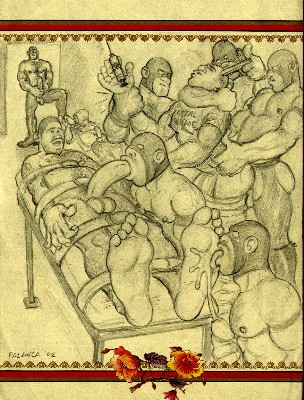 There is a darker side to Palanca, he has produced images depicting scat, mutilation and cannibalism, hanging, grotesque monsters and limbless devils, but for my final selection I have chosen an unconventional fetish image in which a rather stylish 'rubber squad' appear to be rescuing a man who is strapped down to an operating table and about to be injected from a hypodermic syringe by some villain.

Well I say rescued, but the rubber squad also take the opportunity to sample his wares and he doesn't look entirely happy about it. The charming notepaper on which the sketch is done provides a rather camp frame for the image which seems entirely appropriate.

~
This selection is just a fraction of what I would have liked to discuss of Palanca's art which has many interesting facets. Light hearted on the surface, his work abounds with careful observation and social detail which is interesting and occasionally thought provoking - like his sketches of homeless men offering 'anything' for food. While caricature and sometimes grotesque distortion of the human body feature heavily his men are often beautiful and sexy and portrayed in a sensual, attractive way that makes you want to linger and lust. A rare talent.

Palanca has a blog called PalancaFeet which is a good starting point for exploring his work.
.
For earlier posts in this series, click on 'A-Z' in the label list below or use the search box in the header to find your favourite artist.
Posted by Mitchell at 09:08