I recently discovered a new blog specialising in 'vintage' bondage imagery, much of which is relatively unknown (in the UK at least) because it was so difficult to publish at that time, even AMG's limp ropings were underground stuff. Seeing the great stars of the time, like Fred Halstead and Jack Wrangler, subjected to genuine bondage is very exciting. 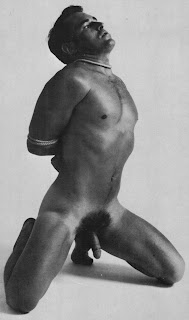 Fred Halstead
The pictures I show here are refreshing because they have a simplicity which goes to the essence of bondage - tying a man up to keep him as a helpless captive. The loop of rope round Fred Halstead's neck, pulling his head back and his wrists up high behind his back, creates an impression of dark threat and desperate struggle and it presents to us a tensed, exposed torso which you want to reach out and touch. This looks like a real man. 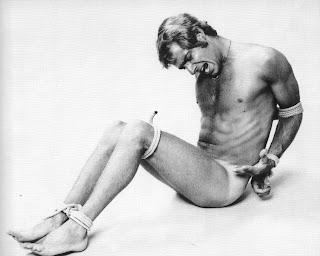 Struggle is the theme of this image of Jack Wrangler too. His apparent unwillingness to remain tied up greatly enhances his male credentials with untamed, animal spirit - which makes him all the more desirable and his inability to escape all the more erotic. This impression of resistance and fear is made possible by the simple level of restraint used, which still allows him considerable movement. The complex web of body bindings that we see in Shibari style restraint can totally immobilise the victim and while this may display his body to good effect, it drains away all sense of his personality and can even make him seem like a passive volunteer, which is nothing like as much fun. Those forms of bondage preoccupied with body enclosure in straps, body bags, masks etc, take this further, focussing more on the bondage experience but obscuring the object of desire - the male body. 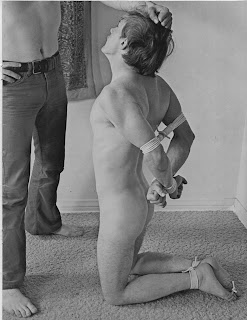 The bondage is similar in this picture, still focussed on arm and leg restraint. It's cleverly photographed to show each of the bindings very clearly - even the tied toes. I think the black and white format helps. This image really creates a sense of subjugation, the captive's kneeling pose of course and the contrast of his nudity with his standing partner's jeans. But for me it's the helmet-like, full head of hair which really makes this picture sing. It's dated, but the careful styling is meant to be paired with equally stylish clothing and looks so out of place on a naked body that it really drives home the fact that this man actually is naked. It makes his trim body seem slender, slight and vulnerable. Seen through modern eyes, accustomed to seeing short hair and ravishing muscles on fetish models, this man looks as though he has been plucked from an entirely different, affluent world, to suffer whatever indignities and abuse his captor desires to inflict upon him.

I published a coloured picture from this shoot a few years ago in my Muscle and Rope series where you can see the captive's face more clearly and compare the visibility of the rope ties when seen in colour. I visualised him as an abducted, spoilt playboy then, I guess we might plump for banker these days!

There were more pictures at Vintage male Bondage. Sadly it's gone now (2019) presumably thanks to tumblrs sudden fit of respectability. I'm hoping the owner of this blog reinvents it somewhere. He set himself a difficult task, finding a sustained supply of quality vintage imagery, but I hope he returns.
Please contact me if you know more.

Wow! It's good to travel back in time! Fred looks so helpless------and so damn sexy!