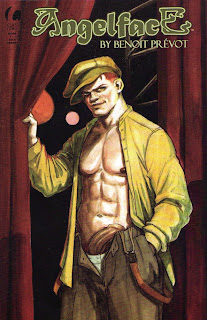 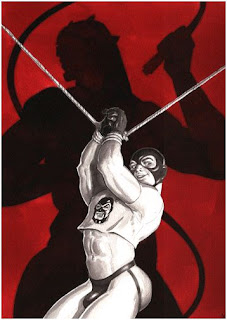 Prevot - Slick it Up
Prevot's fetish credentials are incidental to his main work, but the confident light touch in this image for Slick It Up, suggests he knows what he is talking about. The dramatic background shadow rounding out the scene is typical of his style 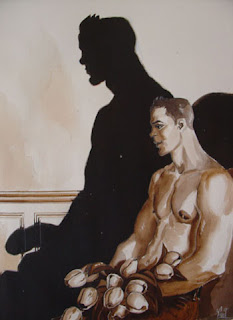 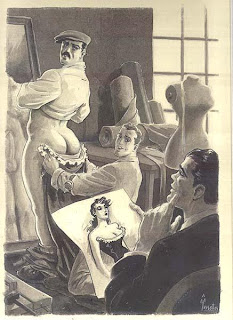 Prevot - Cleavage
There are similar undercurrents of class and manipulation in 'Cleavage' (my title). A workman in a fashion house is commandeered to help the model a new garment for the catalogue illustration. In this marvellous image, Prevot creates a power and humiliation scenario full of unexpected twists and contrasts.
The smooth, young, stylists are distinctly upper crust and full of confidence and this enables them to exercise complete power over the stereotypical, humble workman who is so straight and conventional he could almost be your dad. They casually humiliate him by persuading him to expose his ass (quite a feat in that era) and must have been thrilled to find such peachy cheeks beneath such an unpromising exterior. And if this exposure were not embarrassing enough for the poor workman, his backside is now compared to a woman's bosom and matched up with a frilly dress, a fetish overtone in it's own right which I've not covered much in this series of articles. We're not quite sure if the illustrator looking on is seriously assessing neckline options or lasciviously enjoying the male 'décolletage' - or perhaps he's noticed the even more embarrassing reflection in the mirror.
This sort of comic scenario (bar the mirror image) could easily have featured in the famous saucy postcards of the pre-WW2 period by Donald McGill, but by taking it a little more seriously and sensuously, Prevot gives it a real erotic kick.

Prevot has a blog and you'll find lots about him very easily via Google
For earlier posts in this series click on the A-Z label below or use the search box in the title bar to find your favourite artist.
Posted by Mitchell at 09:56

Great analysis and interesting insight (esp. the class stuff!) into some wonderfully creative artworks from a great artist.