Steven Player is another well established illustrator who produces a good deal of mainstream fantasy work. This overflows into his gay-themed images which are often gritty and populated by angry men, skinheads and strange gnomic creatures and dwarves. 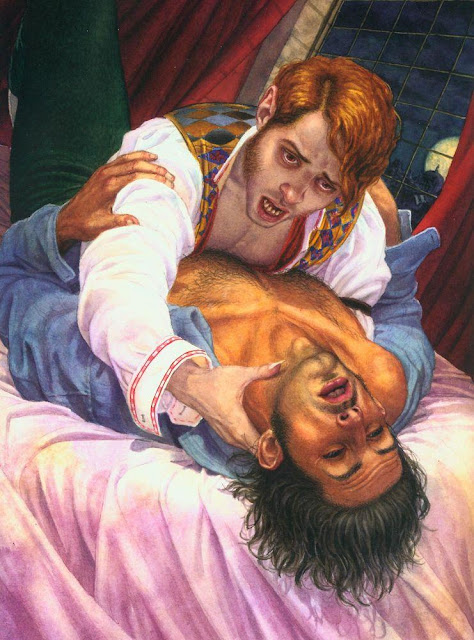 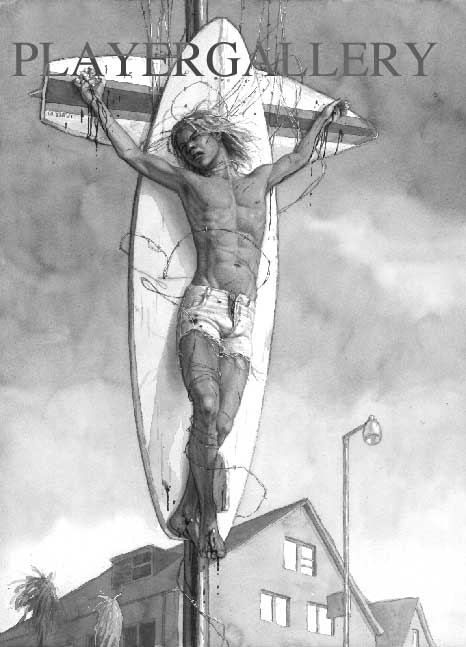 Player - Surf
The surfer crucified and bound in barbed wire on his own surfboard appeals to ageing killjoys and sadistic tastes alike, but it is an angry, disturbing image. It's not just youth and the carefree lifestyle (represented by floppy blond hair and cut-off jeans) being punished here, but sexuality too (lithe muscular body and unbuttoned shorts). Nails, blood and barbed wire (as in the film 'Jubilee'), Player doesn't pull his punches. 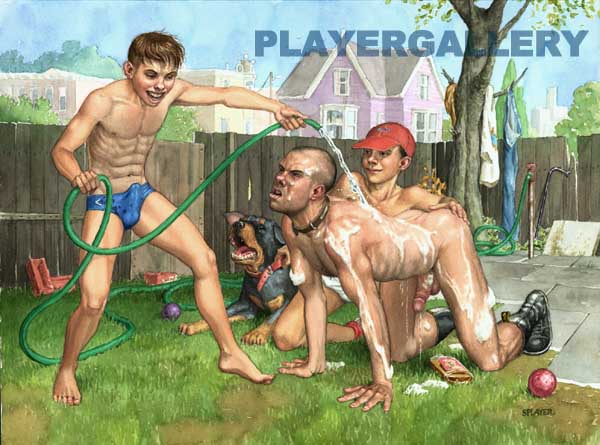 Player - Man Dog
Player presents his ageist credentials in Man Dog. An ordinary suburban garden is the setting for a humiliating role reversal as two boys 'wash the dog'. The 'man dog' is a full blown, angry skinhead with Doc Martin Boots and skinny jeans, now dangling from a tree in the background. Player's skinheads usually inhabit the dangerous alleyways of the city. It's not clear how he got here nor quite how these mischievous lads persuaded him to undress and don a dog collar while they washed him down - he's a burglar caught in the act perhaps? At any rate they are clearly in the driving seat and all concerned seem to be finding it jolly exciting, including the real dog - a nice touch. 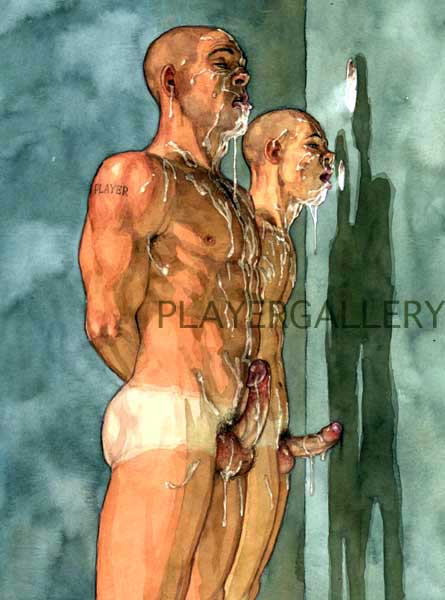 Player - Twenty Seven
I love this picture of shared, ritual humiliation. Two young skinheads are on the receiving end here, hands tied behind (?) they are placed in a closet to be anonymously anointed by the rest of the gang, one after another. At twenty seven, (not their ages I suspect), their faces show it's not altogether to their liking, despite the obvious excitement at being used. Interestingly, Player depicts a changeover moment and only light is streaming through the gloryholes, allowing the two buddies to reflect on the messy process. I quite like the fact that they are shown standing up, still proud men. It requires us to imagine up some sort of raised platform for the donors on the other side of the wall, but makes the humiliation more profound than abject grovelling and also allows Player to show us their attractive bodies.

An intriguing picture. These ruffians have landed in some tropical region and could be soldiers judging by the hair, tattoos and dog tag on view. They have made a prisoner of an attactive young man, who appears to have just tattooed one of them on the arm, although his features and own tribal tattoos suggest he is anything but tribal or local. The two handsome rogues seem to have discovered that his loin cloth conceals an undeclared interest in them and are amusing themselves discussing what they might do about it - with cane and cigarette ready to hand. Political undertones here? Although it doesn't have the raunchy drama of other Player pictures, the characterisation of the three men in this picture is fascinating and true to life. It's a picture you want to linger over.

Player's own website is PlayerMen, you'll find some sexy images there
For earlier posts in this series click on the A-Z label below
Posted by Mitchell at 11:02