Marc is another artist with morbid interests and he is as single minded as Mahoney but focussed on execution by hanging rather than crucifixion. In Marc's pictures, groups of men are usually suffering the same fate, apparently voluntarily in some cases. 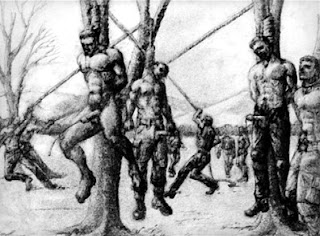 I don't have a large number of examples of his work and those I have are fuzzy copies. They are drawn in great detail, including the background locations and the intensely naturalistic style is disturbingly authentic looking - particularly when he appears to be depicting mass military executions as here. The distant viewpoints and small scale means little can be made of the victims beyond kicking legs and voluminous ejaculations. The poses of the executioners, however, are given some thought and they may be hauling on the ropes, looking on casually or intimately sharing the victims last moments.
A fascination with the supposed association between violent death and sexual excitement is not uncommon - as a survey of tabloid headlines would sadly reveal. It's not that difficult to understand and Marc addresses the subject with a directness which is fascinating but unsettling.
I cannot recall where I found these images, probably the best place to look for his work is at the GMBA archives but there is also a group called Gay Noose which specialises in this fetish.

To see earlier posts in this series click A-Z in the label list below
Posted by Mitchell at 10:31