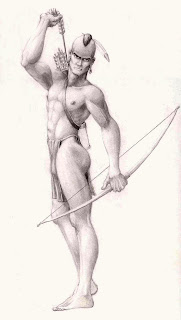 Marquis - Indian
Marquis produced some striking bondage images in the 90's. He has an instantly recognisable, softly pencilled style which is almost academic in nature. His subjects typically have slender arching bodies with major muscle groups well defined somewhat in the style of an anatomical drawing. Their faces have a slightly Asiatic flavour, with pronounced cheek bones and chins, dark eyes and fleshy lips. 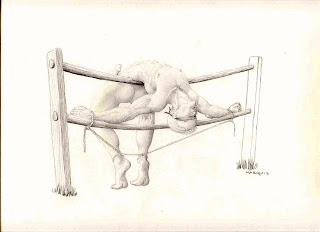 Marquis - 'Fence' series
These men are shown tied to posts, gates, saddles etc., struggling with their bonds or turning away from an unseen attacker, their heads flung back. The single figure compositions lend themselves to elegant images and Marquis has an eye for positions which are satisfying both erotically and artistically. The viewer is invited to linger and examine the helpless captive before him, to fantasise about what might be done to him. 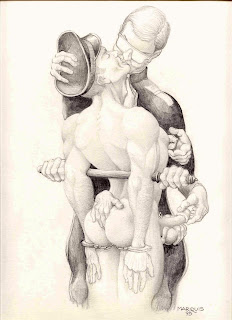 Marquis - 'Nightstick' series
The nightstick picture shows how Marquis' approach to drawing which is based on building up the structure of the body rather than observing it's overall shape gets him into trouble with angled heads. It also leads him to include fine detail like lines between teeth for example and the knobbly bits of fingers which are normally not noticeable. However, this picture has another sort of cleverness about it - count the hands! This image can be related to other work by Marquis which links his bondage images to more self-consciously arty imagery like picture frames, Greek urns - and multi-armed Asian gods.
Marquis' work does not have the sensuality, earthiness or drama that the most successful fetish artists achieve but his best images have an artistic beauty which will always secure him a place in the hall of fame.

Marquis now (Jan 2013) has his own blog at marquisbdsm.tumblr.com
The other place to look for his work is at the GMBA archives
To see earlier posts in this series click A-Z in the label list below
Posted by Mitchell at 12:19