Manflesh is one of my favourite artists and I can't resist giving him a more extended review than usual. He draws the most delicious, hunky men in capture and kidnap situations where they are tormented and abused, physically and sexually.

Manflesh - Cop Enslaved (cover art)
Cop enslaved is a good example. It's a comic book cover, the type of art for which he is best known. His men are stereotypical hunks with handsome faces and virile occupations such as cops (as above) but also soldiers, sportsmen, etc. In the stories which Manflesh illustrates, these men start out full of arrogance and bravado, clad in evocative male outfits that bulge under the pressure of their contents but these are soon removed or ripped off as they begin their new lives in captivity. 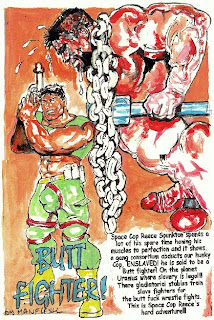 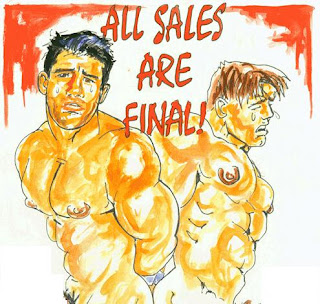 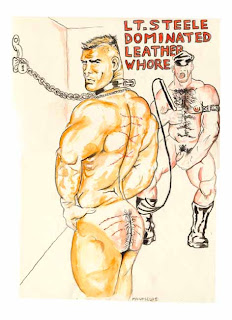 Manflesh - Lt Steele
The process of control is comprehensive, the naked slaves are put to work and used as beasts of burden, encouraged by brutal whippings and other punishments from their captors. But this is mere preparation for their principal role as sexual servants. In pursuance of this, their impressive male bodily attributes may be modified, enhanced, diminished or even converted into cavities for the pleasure of their abusers. We only see the end result I'm glad to say. The semi-caricaturing style ensures that the reader is able to feel little sympathy for these fallen idols. 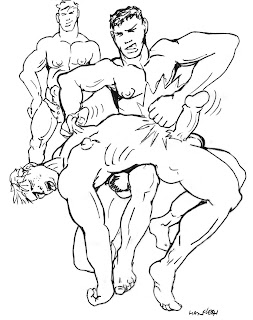 Manflesh - Fighters
Control and humiliation of male beauty is the underlying theme and Manflesh does it better than most. His illustrations are intensely physical and his interest in male fighting and wrestling is reflected in a series of line only pictures on this specific subject. The theme is also evident in his mainstream work as well (see Rugby Lion). 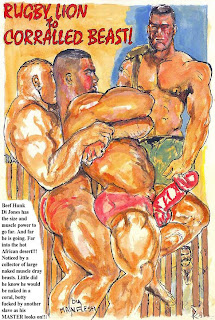 Manflesh - Rugby Lion
The figures are simply outlined in ink and the details and volume shading are added using a colourful painting technique which looks like watercolours and is virtually unique in my knowledge of fetish art. The style looks rushed, sketchy and casual and sometimes the colours are a bit garish, but he still manages to produce the most astonishingly real faces and succulent (unreal!) body parts particularly on the cover pages for his stories. The inner pages are more cartoon like, less refined in style than the average comic book, but peppered with sensuous imagery and infused with a sense of drama and movement.

See more at the Manflesh blog. He used to be published through the late Barrett Cole's website and pictures were still on view there last time I looked, but the stories are now being offered at battle-annals. There are also samples of his work at the Tom of Finland Foundation galleries (link in sidebar)


To see earlier posts in this series click A-Z in the label list below
Posted by Mitchell at 09:57

Really like these ... especially the gut punching one. WOOF!

some nice drawings on here.
If you wanna swap links let me know.