Sometimes called Macheath but I think it's the same man. Macbeth's pictures are dark in appearance and in content. They feature grim faced men wearing leather jackets and peaked caps in threatening poses, having rough sex and making brutal attacks on naked squirming victims. 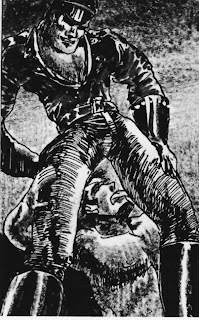 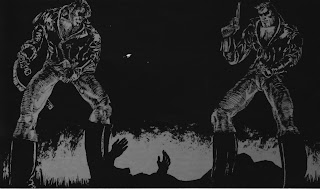 Macbeth - The Belt (my title)

The picture above is my favourite, the two attackers have handsome square jawed faces and sexy bodies in heroic poses to match and this seduces the viewer. The imploring hands of the unseen, anonymous victim just seem pathetic. It's so well drawn you mentally stop and look closer. Then the full meaning of the picture strikes home: the victim's unseen injuries, the belt curling for another lash, the cruel, determined expressions of the two attackers and their unashamed sexual pleasure. I don't think for a minute it's meant to have a moral, but it's a very clever depiction of a very forbidden desire. Clever not only in the storytelling but in it's technical execution too. 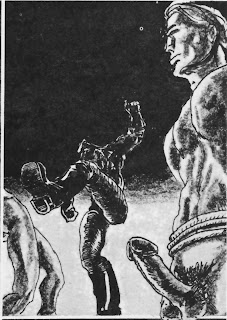 In these pictures the facial features are sometimes very roughly sketched with a few spidery lines with volume shaping achieved by dark blocking, a technique similar to that often used in war comic books. The point of the pictures is not physical beauty but a sense of dark drama and action which climaxes in the most violent images showing attackers kicking and stamping on their victims. Many feature dramatic upward angles which puts the viewer (and the artist?) in the position of the victim, not a comfortable feeling. The dramatic effect is heightened by exaggerated foreshortening and distortions of size.

There's slight resemblence to the style of Les, but Macbeth's aggressors show a deliberate cruelty in their faces and deeds which goes much further and perhaps is better compared with Greasetank's violent and threatening pictures except that you can't see the blood in black and white. And whereas Greasetank's meanfaced villains are chillingly calculating in their evil, Macbeth's seem to be boiling with urgency and anger.

You will find more pictures at the GMBA archive

To see earlier posts in this series click A-Z in the label list below
Posted by Mitchell at 14:51