(Also publishes work under the name Yamato)
Fuwa’s pictures have a distinctive, dark, textured look. His men are large and well built with rather attractive chunky faces featuring fleshy lips and slightly spiky dark hair. Some Japanese artists seem to ‘westernise’ their character’s faces but Fuwa’s retain distinctive national characteristics with a strange air of innocence quite at variance with the activities they participate in. His men are not always hairy but he does a nice line in arm and leg hair.
. 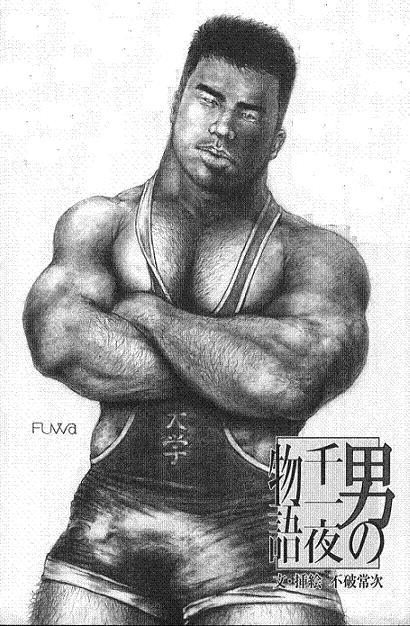 Fuwa’s pictures cover every fetish you can think of and are decidedly sleazy in character (that’s a compliment!) with close ups of the relevant areas and lots of juices splashing around. Fuwa’s interest in showing this detail results in plenty of close-ups and some rather unlikely poses in the more dynamic pictures. Whilst there is bondage in abundance the atmosphere is consensual and cheerful.
In some of his pictures the fetishism is applied to static poses derived from bodybuilding. These show off the muscularity of his character but they do seem a bit ‘posed’. I think it’s fair to say that Fuwa is more interested in excitement of the sex than the artistic, erotic possibilities of the human body (as exemplified for example by Fillion’s arching bodies in suspension -see previous post). 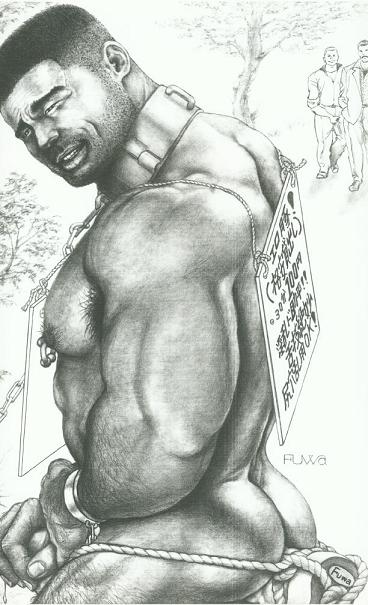 Fuwa usually provides sketchy background details in the style of Tom of Finland to help conjure a story for the viewer. He also makes extensive use of clothing which is a clincher for me. As well as the mandatory leather and cops uniforms, there is a nice sprinkling of sports wear - rugby, judo and rather delicious wrestlers in leotards of which the example here is the most decent!
.
There's a small gallery of his work here but I’m afraid I don’t have a proper link for Fuwa, if anyone can supply one please get in touch. His work is featured in G-men magazine.
.
If you want to read the earlier articles in this series, click on the A-Z label below

9/26/2013 2:29 pm Fuwa
Mitchmen: I've been trying to find the artist behind this "Captive in the Park" (or the bondaged man) for ages.
The link led me to you, I wish the photo was larger and I could read those messages on the boards, he is getting quite a scolding.

His name is George Fuwa, also known as Shimon Yamato. I've posted a link now in the message.

You can expand the 'Captive in the Park' image by clicking on it. The writing is quite easy to read then, providing you can read Japanese! I can't I'm afraid. Any offers out there?