Etienne was a contemporary of Tom but his take on sailors is quite different. For a start they are never properly dressed. The uniforms are not there to be squeezed into but to be worn (or partly worn) as ‘badges’ telling us about the man be are viewing. Thus in (55) one sailor’s uniform is not worn at all but hanging on the wall. 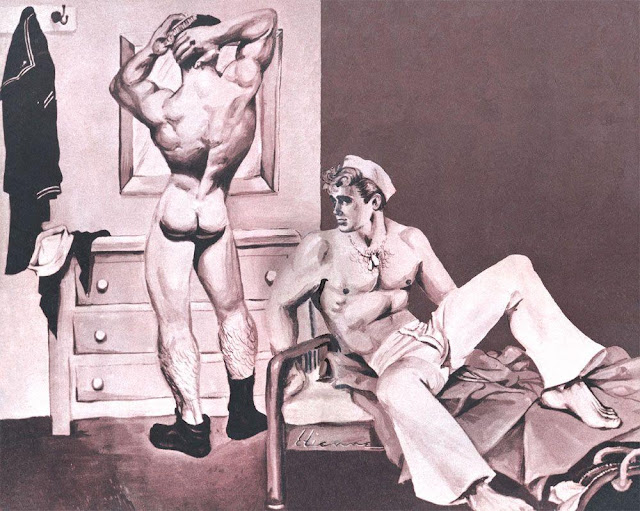 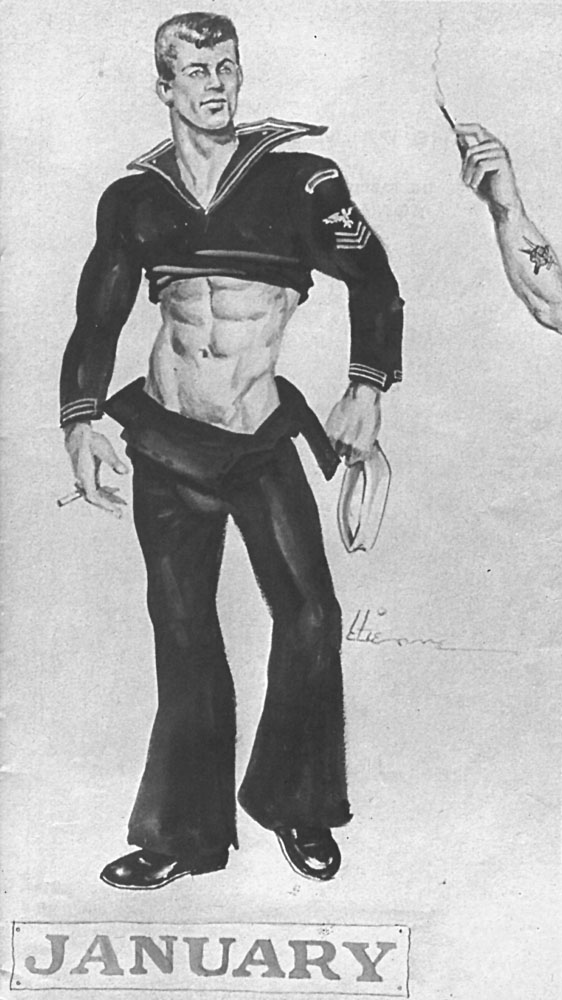 Incidentally, all the pictures in this Calendar series feature an arm contributing to the action in some way. It presumably belongs to the artist and, though muscular and tattooed, it is depicted in a rather camp pose. Again typical of the time.
*
The state of undress continues in the next picture where (57) two sailors are brawling in a bar and, in the process, are ripping their uniforms to shreds, revealing large amounts of attractive bare flesh. 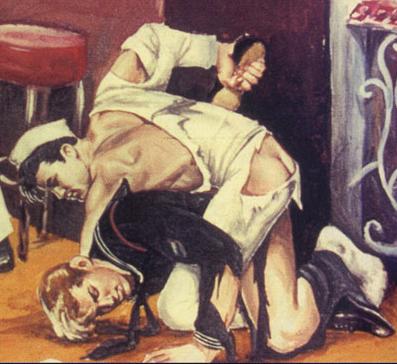 Ripping clothes is a uncomplicated way to show sexual aggression so it introduces an interesting ambiguity into the fight we are seeing. As far as I can recall Tom never used this device. But Etienne was uncompromisingly sexy. This picture is a detail of a larger piece in which other sailors are fighting in similar ways. It is interesting in that it shows a real (if unsavoury) slice of life, an insight into the animal nature of sailors, which Tom only hints at in his ‘spilt coffee’ picture.
*

The final picture is from Etienne’s series ‘Navy Grease’ in which a sailor is first abused by the crew and then by the Captain when he complains. 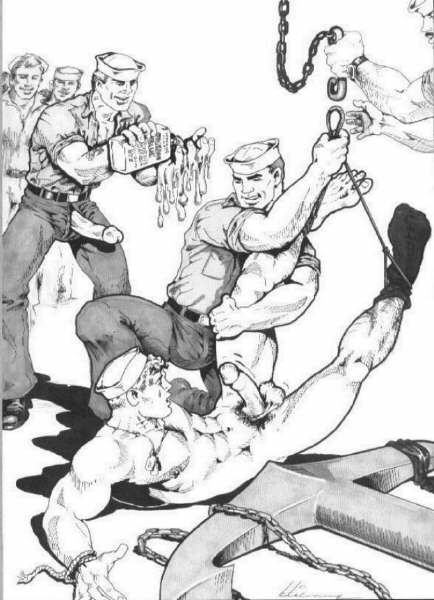 The opening pictures of this set of which (58) is one, rank amongst Etienne’s best work for me. The draughtsmanship is excellent. Unlike Tom’s sailors you don’t get sensual clothing effects which hold the eye but the storytelling and visual characterisation of the men is very, very good. The bullying of Tom’s ‘spilt coffee’ picture has moved on apace here but atmosphere is quite different. The victim seems younger and, despite his fine physique, more vulnerable. He is also facing more than one tormentor so the message seems less about domination than exploitation. For me this is not so erotic but others may love this particular power play. Instead of formal dress, Etienne uses the working clothes of sailors in these pictures, harking back to those WWII Pacific War films, I suppose, but another indicator of his ‘real life‘ viewpoint.

Read this series from episode 1
Posted by Mitchell at 20:04