Ronnie Pearl Hands Out A Humiliation

Wrestler Ronnie Pearl has it all - well-groomed good looks and a gorgeous, crafted physique
and yet he somehow slips under the radar when it comes to star status.

He doesn't just have decorative value in the ring, he has a capability to project aggression which is very convincing and it's well illustrated in these extracts from a 3-some at W4H where he takes on the villainous-looking Johnny Jobber (below left) and the mischievously cute Ace Owens (right). 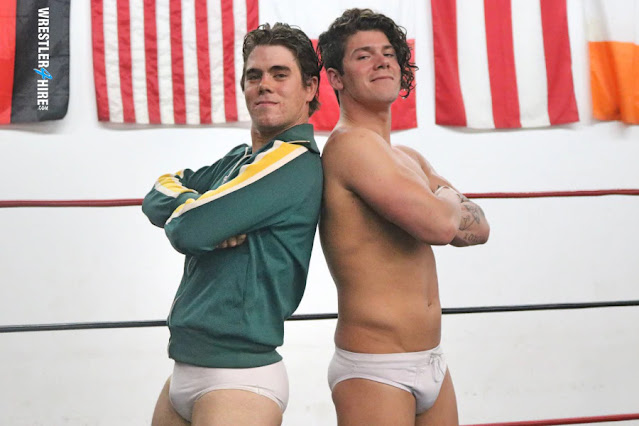 Both these pair have the sort of look you'd try and avoid on a Saturday night out, smugly full of themselves and probably looking for trouble. Jobber's zip-up jacket here epitomises that stereotype, casual and devoid of style. Their matching, snug-fitting trunks are a redeeming factor and indisputably sexy, but beware of that dangerous lure or prepare yourself for a sorrowful morning-after-the-night-before.

These two are a pair of toughs who have invaded Ronnie Pearl's home intent on robbery
- with violence if that opportunity presents itself.
They discover that he has a wrestling ring in the basement. 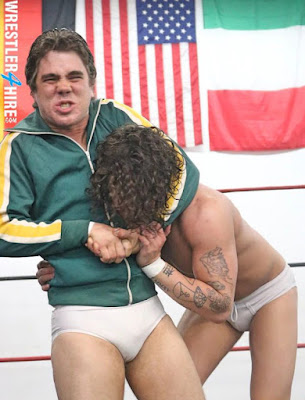 These two like fighting each other as much as they enjoy beating up other unfortunates. It's not so much playfulness as a weird form of friendship in which dominance needs to be continually proven.

It's a mutual, relentless need and both men are equally capable
of dishing out painful demonstrations of their masculine prowess.

The close body contact involved in these spats
has no sexual for them significance - obviously.
Nor those matching sexy trunks for that matter

Ronnie's wearing black swim trunks. He was relaxing out by his swimming pool and heard their noise. He's not best pleased to find these invaders messing around on his property and Jobber is right in his firing line. 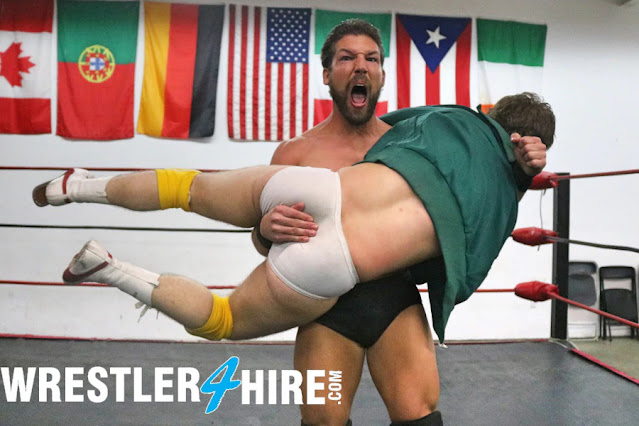 Jobber is scooped up in an invasive crotch hold.

From a complete stranger at their first meeting, it's a bit of a shock for him.

Not that he has very much time to reflect on where that hand is. 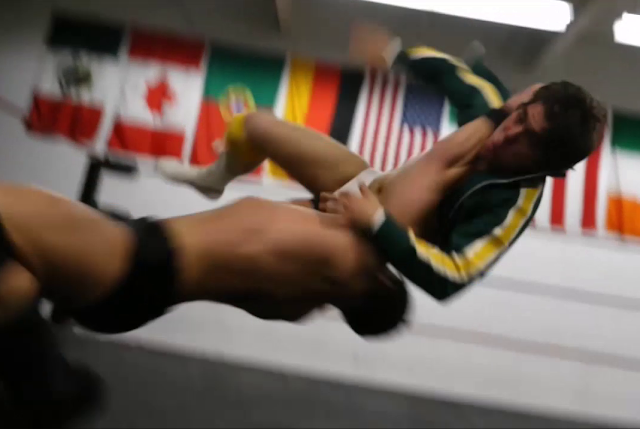 The between-the-legs greeting is just the wind-up
before he's tossed backwards over Ronnie's head,
heading for a hard landing on the floor several yards away.

Ace is horrified to see his friend crashing onto the floor
But before he can react Ronnie Pearl's arm snakes under his crotch
and hoists him onto an even more frightening precipice.
A great shot of Ronnie Pearl's body and look where Ace's hand is.
Ace's own white trunks look pretty good.
Jobber's tearful, open crotch display might be unfortunate in the circumstances.
I have cropped some of these images to accentuate the drama and conceal as far as possible those intrusive knee protectors which tend to constrain the imagination. This one has also taken off the logo unfortunately, but this is a Wrestler4Hire image. 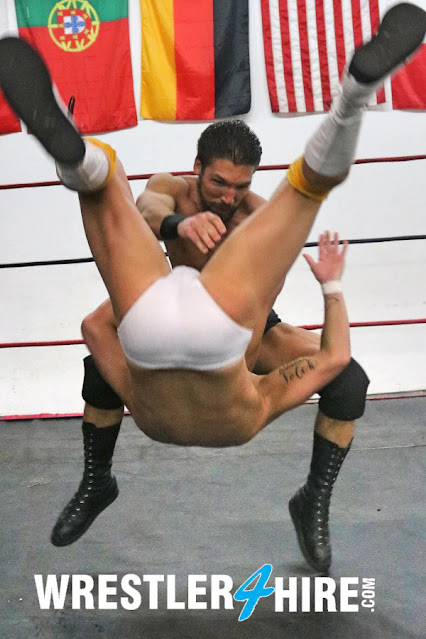 Pearl sends Ace crashing onto the floor,
throwing him down with all his strength.
His venom here suggests there's history.
But these boys don't know what's hit them! 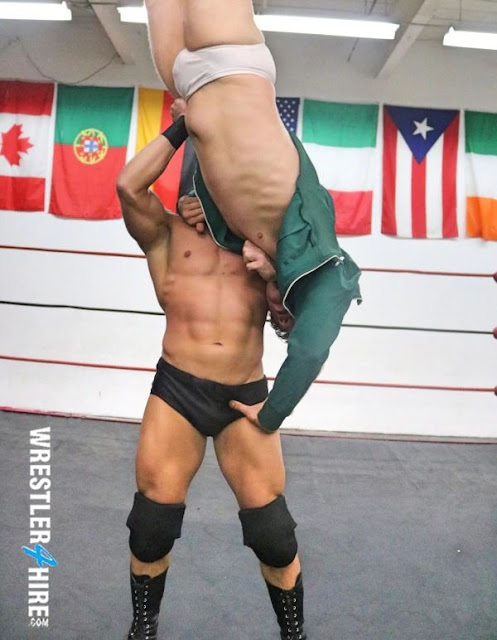 Ronnie leaves Ace to nurse a painful back and goes back to Jobber.
He grips his trunks to lift him into the most terrifying position yet
with his head aimed directly downwards at the floor
and down he goes!
A delicious shot of Ronnie's torso here and, to be fair, Jobber's body shows up well too.
The shapes in his trunks seem to indicate that he's not enjoying this drubbing. 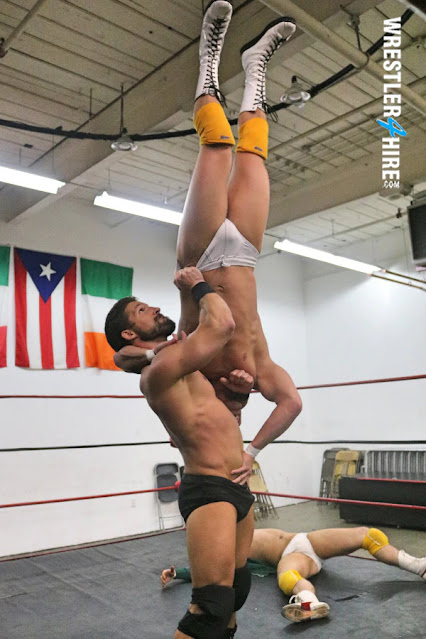 Immediately Ronnie grabs the groggy Ace
and gives him with the same upside-down drop.
Seeking support, Ace's fingers dip inside Ronnie's waistband.
Is this an instinctive attempt to curry favour?
It works with me - but maybe not Ronnie.
Both men have produced pleasing trunk displays here. You can tell who's winning!
This photo gives a nice sense of height. It's almost as if Ace is about to be hoisted up by the feet with Ronnie carefully positioning him on a hook. 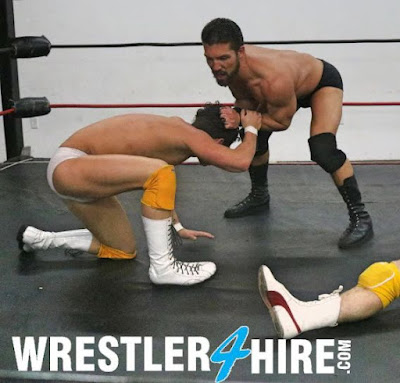 Ace seems to attract more than his share of Ronnie's ire.
Maybe all that groping really was ill-advised.
Dragging him by the hair a deliberate, insulting reprisal. 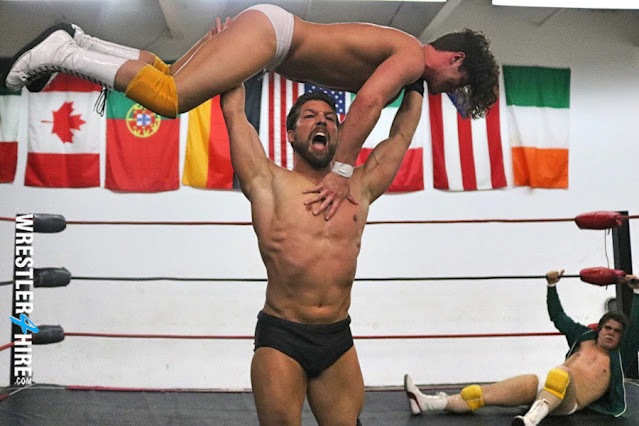 And once again Ace is lifted high in preparation for a painful descent.
But this time Ronnie pauses, holding the conquered man aloft
and roars out his victory cry, Tarzan fashion.

Pride comes before a fall as they say.
Ronnie Pearl doesn't even bother throwing Ace down this time,
he just walks away, leaving him to drop to the floor behind him.

Jobber cringes in the corner, hoping he's not next. 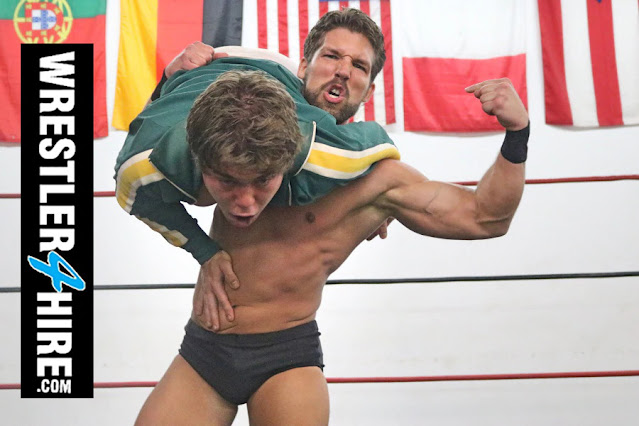 Well, he is of course!
Once again Ronnie makes a humiliating public display of his victim.
Jobber can only think of where he's headed next
- and it's towards the floor, not out the door, unfortunately. 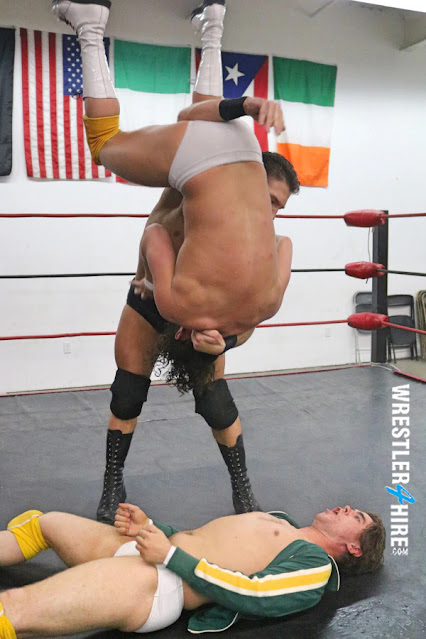 Where he's soon joined by his friend Ace,
as Ronnie transforms him into a human missile
throwing him from a great height to land right on top of Jobber 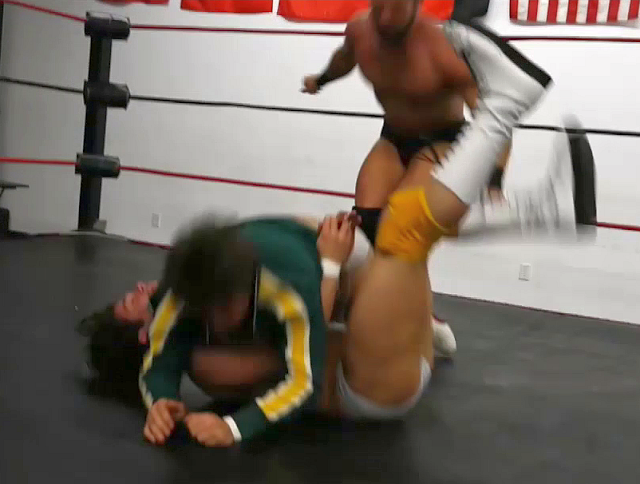 Seconds later Jobber gets to try it himself as Ronnie manufactures a second collision
this is hurting their pride as much as their bruised bodies. 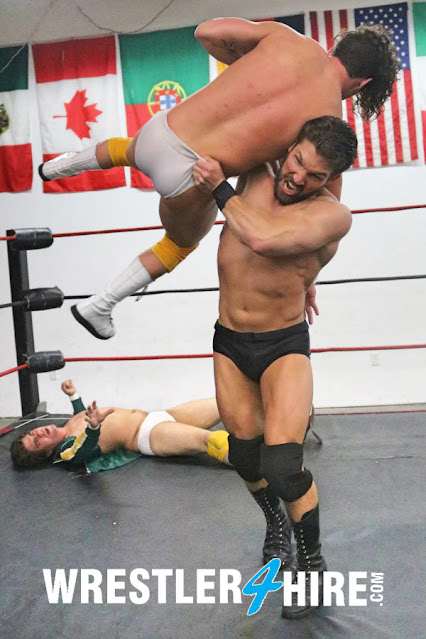 But there's no chance for the two ruffians to give commiserate.
Ronnie grabs Ace again and carries him, semi-wedgie.
Another great picture of Ronnie Pearl's strength 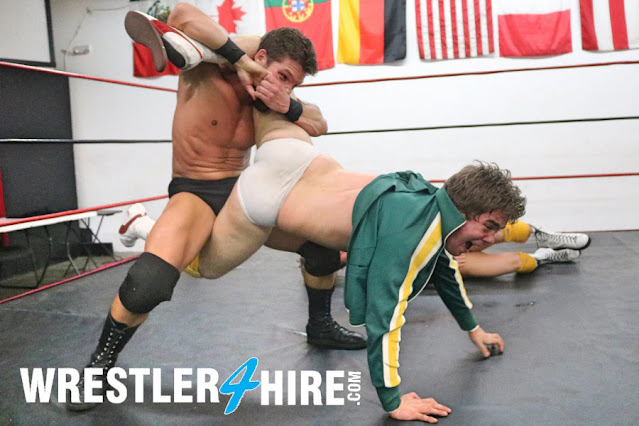 Faced with relentless punishment, Jobber makes a break for it,
Taking advantage of his friend's misfortune.

But Ronnie catches him and to inhibit further escape attempts
he hooks Jobber's leg round his own neck
applying a leg lock to painfully lever his knee joint. 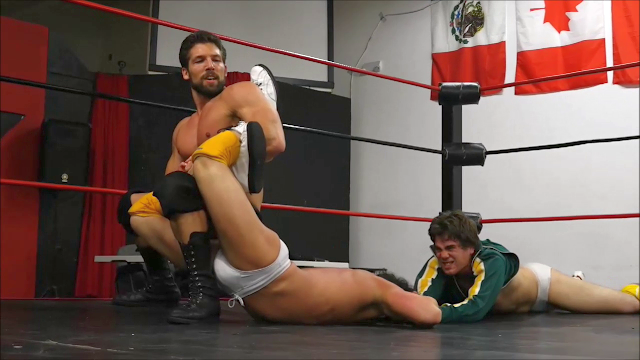 He then puts Ace in a Figure 4, disabling hold, in case he get's any ideas of leaving.
Notice Ace has suddenly produced a more interesting bulge
Jobber looks mortified, probably realising Ace isn't going to be much help to him. 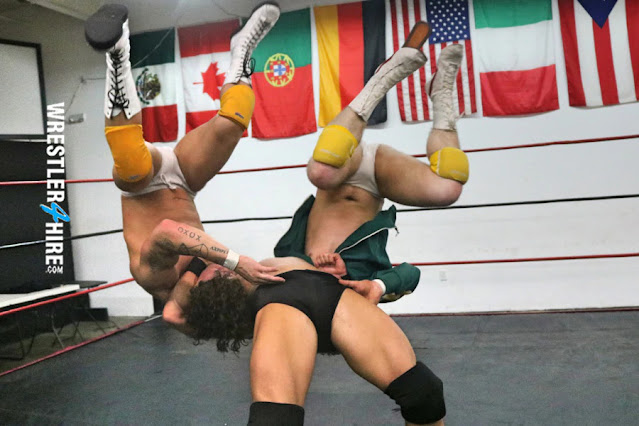 He demonstrates that complete superiority by getting both of them in a neck hold
and simultaneously hurling them both over his shoulder. 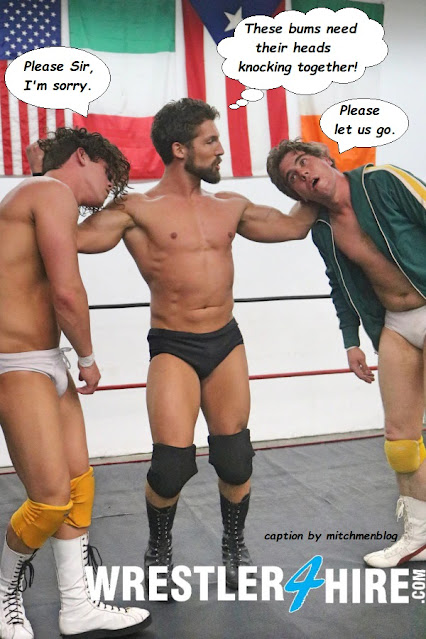 The boys have had enough. They stop any pretence of resisting
and can't apologise enough, begging to be allowed to go.

But Ronnie's not in a forgiving mood. 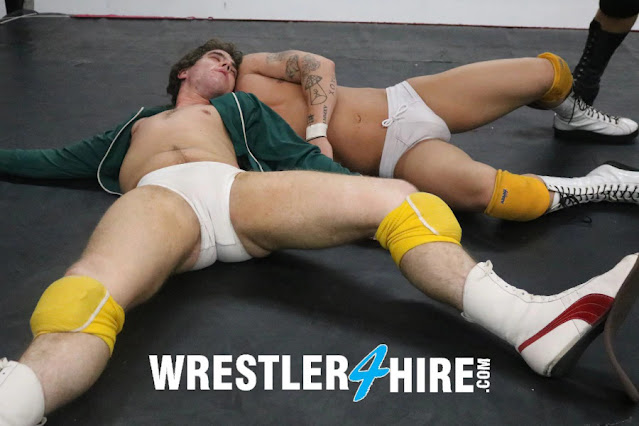 Both villains get a headache and a blissful respite from the traumas of the last hour.

Jobber needs to watch those trunks, they might get him into more trouble! 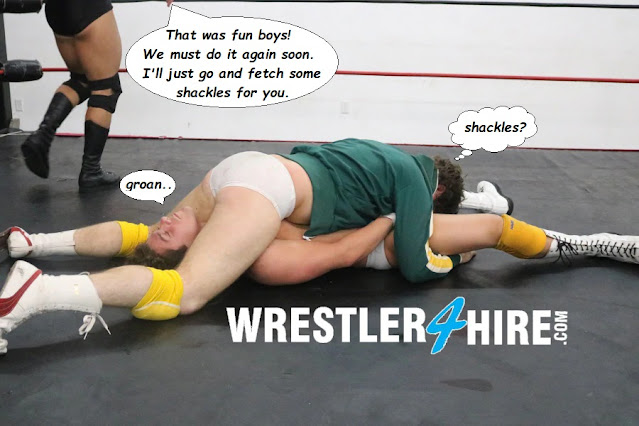 And so another day in the Ronnie Pearl Training Centre (with rooms) draws to a close.
Pausing only to arrange the two bodies in  a pleasing fashion (like Tosca does in the Opera)
Ronnie goes off to prepare a simple room for their extended stay.
Tomorrow will be a long, tiring day for them all.
~

Needless to say, this storyline is entirely fictitious and any characteristics assigned to the models in their roles here are not based on knowledge of them nor factual.

In the original video, Ace and Jobber are also cast as pals, Ace gives Jobber some tips on holds and practices with him before Ronnie Pearl appears and teaches them both how to do it with style. There's no obvious rationale for his aggression, just a top doing what tops do to jobbers in wrestling circles. Personally I find it hard to see him as a villain, not even a ring villain, he looks too charming!

for more wrestling humiliations at mitchmen click on the label below