A naked muscular man is restrained on a hi-tech table while the last dregs of a sample of his semen are delicately extracted from him with a pipette. Despite the cartoony style, his face is a nice portrayal of a butch stereotype who would clearly be quite a handful for the lab staff were he not controlled in some way. Tying his hands together to keep them out of mischief like this is a beginners bondage technique, but the restraint is exceptionally chunky and attached to a crude, but strong chain. The effectiveness of this simple equipment must be very frustrating for him (and enjoyable for us!) . 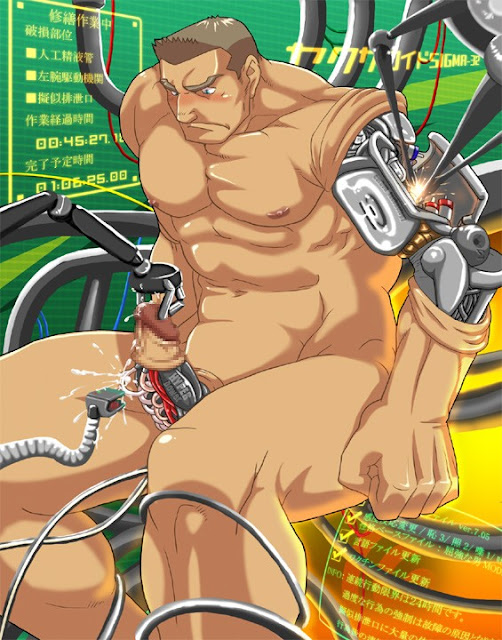 This is something quite different. It seems to show the assembly of a bionic man who is apparently being fitted with a 'Hyper Power' extension to his cock and doesn't approve of the adaptation. Or perhaps he's a total robot, mystified by the useless device between his legs. The augmentation situation is the reverse of the extraction above but no less manipulative and interesting on that accounr. However, the styling of the man(?)'s face is not as characterful or satisfying and I confess the rolled back skin makes me squirm! I'd be glad of any help from readers in understanding what exactly is going on here.

Ron9's images are usually dense with detail in vibrant colours and for that reason are probably better enjoyed in small doses, so I've resisted the temptation to expand this article into a wider review of his work.

There's a Ron9 gallery at YaoiAI

also at Ron9 at BaraMangaOnline

There's also a Ron9 user at pixiv but it doesn't look like the same Ron9 to me!