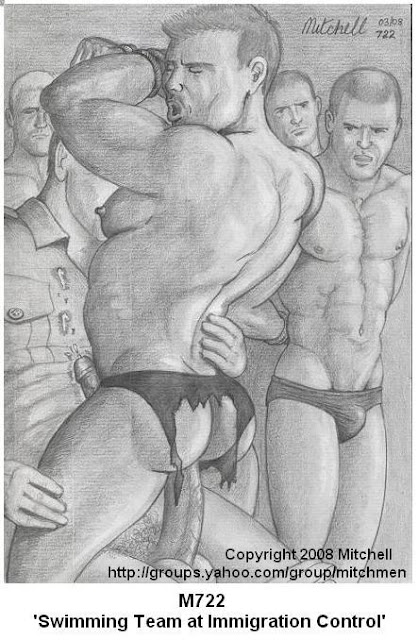 The National Swimming Team were delighted with the skimpy trunks in team colours, which they were given to wear at the World Championships. At a boozy send-off celebration they all decided to wear them on the plane travelling out, to demonstrate their pride in the team.

The Championships were being held that year in a country not renowned for it's liberal attitudes and sense of humour. When the border guards spotted them queueing at immigration, wearing nothing but swimming trunks (that covered very little), the whole team was immediately detained.


Their wrists were tied together and they were locked up together for several hours in a small, hot, and very smelly cell. It was clear something needed to be done to placate the guards. It was the Team Captain saved the day by volunteering to take one for the team in the end. This sufficed to ease his passage but the rest of the team had to watch uncomfortably as he negotiated the Officer in charge. They were all wondering, if they had to make a similar sacrifice, how on earth would they obtain replacement trunks in time to take part in the Championships?

This picture was previously published as part of my 'Inspired by Tom' series and a censored fragment was also published here in the mitchmen blog in the article Swimmers in Mitchell's pictures
I have now upgraded that entry to the full image.


for other pictures by Mitchell, click on the 'mitchpix' label below
and visit the Galley Hub page
Posted by Mitchell at 10:40

Mmm I always enjoy a 'prison' scene, and the trunks are very arousing as well!