These days it seems like any Rogue can invade your property with impunity,
help themselves to your valuables and leave the place in a mess.
That's what Gary intended to do when he invaded the house of a wealthy investor.

He had observed the man departing with a suitcase for one of his regular absences.
and to his delight, he found the fool had left the back door unlocked.
But once he was inside he was surprised to run into another man
standing in a hallway, a man dressed only in swimming trunks.

There was a brief struggle in which Gary soon realised that he was out-classed
That was followed by another brief struggle which left him wearing only his briefs. 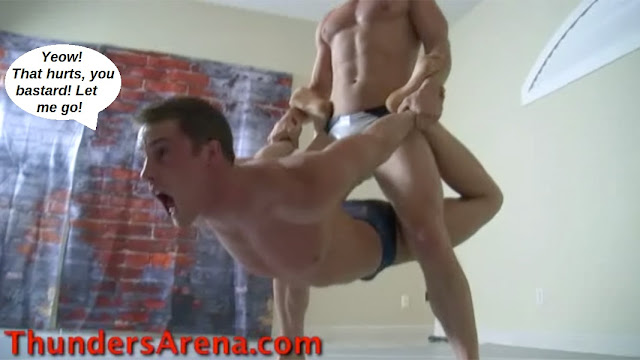 Gary didn't know that the investor had a Protégé that he was sponsoring,
a young man who was training to be a professional wrestler.
He was delighted to acquire an impromptu training partner.
Gary wasn't much of an opponent, easily overpowered,
but his slender supple body was ideal for a new hold the wrestler was learning,
'The Teardrop'.

Round and round they went and Gary howled and pleaded
His anguish was ignored and no-one outside heard or came to save him.
Gary didn't know what the hold was called
but his face was suitably streaked with tears anyway
as his captor carried him up the stairs to bed
for a bout of grappling of another sort.

Gary had arrived thinking "I'll just slip in and lift what I want".
Instead, it was him that got lifted - and his target who slipped in
able to have whatever he wanted.

for other Rogues, click on the label below
Posted by Mitchell at 10:10