Little Known Incidents of WWII (No 1) - Lick My Boots! 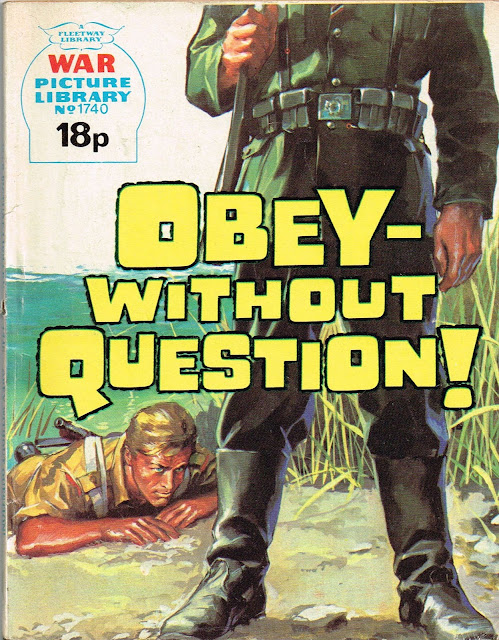 Jim was supposed to distract the sentry while his Unit carried out their mission.
His approach was easy, the man wasn't even looking out to sea, nor watching the beach.
The surf and the squawking seagulls hid the sound of his movement through the grass.

But now, up close, he found himself fascinated by the sentry's immaculate, gleaming boots.
He could smell their leather, see them flex as the man shifted his weight in them.
Boyhood memories stirred deep within him, of  booted, celluloid screen heroes
flamboyantly overcoming their opponents, forcing them to kneel and submit.


Jim felt a strange temptation to reach out, touch, to smell them, even.
Suddenly the sentry stirred and stretched lazily, he turned and saw Jim lying there.
"Himmel, ein Englander!" he exclaimed, hastily un-slinging his gun and aiming it.

Their eyes met. A sort of recognition passed between them.
Jim forgot his orders, in that moment he knew what he had to do.

War Comics like this were part of my formative influences. I can't recall seeing this one and probably would not have caught on to the fetishistic interpretation even if I had. Not consciously anyway. Once you have spotted it however, it's hard to imagine that it wasn't intentional. 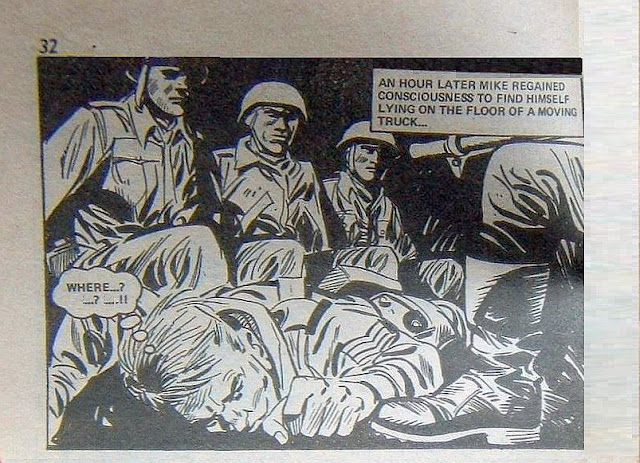 This second image reinforces that fanciful impression. Notice that Jim's hand appears to be actually touching the boot here. It comes from a completely different story and although the styling of the boots and other details is similar, it's not by the same artist.

At the time, the so-called 'jackboot' was popular shorthand for the despised militarism and aggression of the regime. Both creators are drawing on that to create a sense of looming menace, but you can't help wondering if there's more to it than that! Most of the ordinary soldiers in the conflict actually treated prisoners with respect given the chance, but it makes for good suspense.