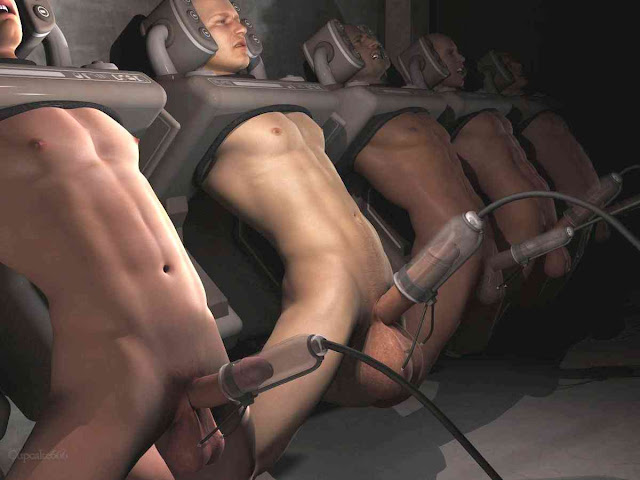 This milking factory by Cupcakes666 is the most intense yet.
This factory owner has invested heavily in hi-tech extraction equipment for his herd.
He clearly thinks that uncomfortable restraint and ball tingling enhances the yield.
The boys are straining at their task most convincingly, but I suspect the pay's not that good.

The atmosphere here seems much calmer,
but perhaps those restraint blocks are more limb-clamping than they look,
threatening to reward energetic movement with broken bones.
I'm trying to limit this series to the original Milking Factory idea of mass male extraction,
so, for example, I exclude solo milking machines, of which images abound (starting with Franco, way back). The circular disposition of the machines here is more borderline, more brat-lab than factory production line.

But why would aliens want to mass produce human milk? Theone in the middle seems to be processing the lads milkings into a (presumably tasty) drink (note the green tumbler). Perhaps this is more like a Vending Machine situation, fresh is best, as it were. Maybe it's the restaurant checkout at a branch of Ikea somewhere out in the Milky Way. Let's hope for these lad's sake that human meatballs are not a delicacy here.

This picture does feature an unusual stimulation route via the navel
and if you've ever tried pressing it during fluff extraction, you'll probably understand the allusion.
Just a tip. Well it works for me!

The resemblance of this arrangement to an umbilical cord introduces a curiously oblique form of 'back to the womb' subjugation/domination which I suspect has more resonance for women than us chaps.

Read this series from Milking Factory Part 1
Posted by Mitchell at 09:22

The GIF is really well done, and even excellently shows the muscle movements of the guys while they are being milked, but to be honest, tit pumps go a little too far for me.