Bill MacLane was a popular gay artist in the 50's and 60's, with his work appearing often in the fledgling gay magazines of the time, indeed it's largely via this source that his work survives for us.

You can see he had a fair eye for beefcake,
studies like this were usually copies of photographs,
but there's an interesting element of 'aloneness' about this image.

The heroic, working man in art was largely a product of early socialist thinking, Ford Maddox Brown being a notable practitioner. It was turned into a religion almost by communist Russia and perverted into hyper-masculinity by the Nazis, but the more romantic view, reflected by Mac Lane here, is ideally suited to homo-erotic imagery. In the 50's it conferred masculinity on the subject matter as well as reflecting admiration.

(At this time Tom of Finland was also glorifying loggers and their remote, rough lifestyle of course. This iconography is less powerful in the UK which has no significant logging industry,
the Monty Python view of lumberjacks is more usual here).

This image makes the point about magazines preserving Mac Lane's work. This is from 'Physique Pictorial' of course. The editorial at the bottom is a period piece in itself, these days gay artists don't feel obliged to emphasise their masculinity in quite this way.

Despite PP's reference to Mac Lane's artistic research, you can see how he uses photographic sources here. The skillful rendering of the foreground figure and background landscape contrasts dramatically with the far less accomplished secondary figures which also don't really seem to fit into the perspective properly or interact with each other (and is that dome really a logging building?). The rope-pulling one on the right distinctly looks like it too originated from a beefcake photo and is lovingly woven into the composition. The disconnect is evident and almost inevitable but still serves an atmospheric purpose in this particular picture.

'Game Over' shows this disconnect effect even more strikingly because Mac Lane is clearly trying to integrate this composition of a Basketball team changing after the match. But the picture is full of men who don't look at each other. Even the smiling pair at the back seem to have closed or averted their eyes. It's an unwittingly powerful portrayal of the strength of the homo-phobic paranoia of its day,
when even meeting eyes is a dead giveaway.

In this context the knowing smile of the foreground figure, towelling himself off, suggests he has secret knowledge, a situation which any gay viewer identifies with. This secret may be simply about his own proclivities or may refer to other members of the team, that's part of the mystery - are they or aren't they? However the fun of this merely masks and underlines his own separateness in this group. Mac Lane's composition technique, building backwards from a foreground 'main' figure, automatically results in that figure seeming to stand apart and underlines this sense of isolation.

Notice the stray foot to the right of the picture, which suggests this is a detail of a larger work.

I have taken the title of this picture from the source given at the foot of this article but I very much doubt that it's Mac Lane's original. Boat sailing images invoke a sense of freedom and privacy which gays relate to but unfortunately it's also symbolic of wealth and idleness which is rather less appealing to modern tastes.

This image comes down to us from the magazine 'Butch', now defunct. The quality has suffered from primitive copying technology but luckily we do have a better version, shown below. 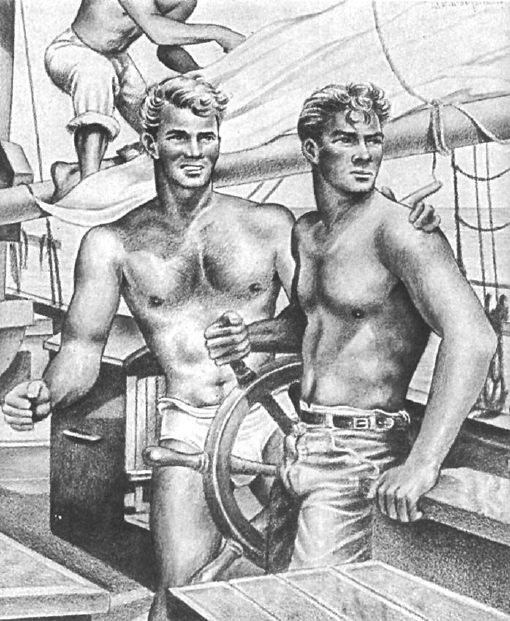 It's a much better, more integrated composition than Mac Lane's other work with some impressive detail like the wet surfaces in the foreground. It's also notable for the obvious expression of affection between the two young men (neutralised for suspicious straights by their averted eyes, again). However, if you look back at the magazine version you'll see this 'touching' element of the picture had been cropped out, censored, and none too skillfully either.

This may seem clumsy and excessive to modern eyes, but it's trickery, for there's another provocative ingredient you may not have spotted. Take a look at the spindle of the boat's wheel, angled at about 10 o'clock. I probably don't need to point out where it originates from (or appears to). The hand grasping the adjacent spindle at a more erect 11 o'clock  now assumes a quite different significance, as does the peculiar shaping of his friend's right hand (also cropped out by Butch).

Mac Lane is thus revealed as an extremely polished exponent of the art of 'hidden eroticism'. Presumably 'Butch' magazine felt the hand on shoulder was too much of a clue to let it go onto a front cover.
If you look back at the locker room scene now, you may now wonder what that guy in the shower is doing and notice the close proximity of a head and crotch in the middle ground. I'm wondering what might have been cropped out on the right! There's some 'naughty looking' going on in the preceding  'Logger' picture as well.

The averted eyes in this image now look decidedly suspicious! Well, perhaps it's boredom or just the way the sources were posed, but look at that rope and the way he's holding it. There's a significant bulge as well if you hadn't noticed and Mac Lane has deliberately chosen to seat him erotically, astride a rail rather than neutrally on top of a flat chest or some other nautical seat.

The wistful sailor appears to be trying not to look at a scantily dressed man, who seemingly wants to be looked at, judging by the way he is standing, though not perhaps by our friend in the foreground. It's another essay on gay loneliness to my eyes and if you think I have an over-active imagination I invite you to consider the word on the life buoy at the bottom of the picture. Incidentally note the simple but convincing detailing of the ship and of the sailor hauling rope in the background.

I don't have a date for this picture, but it seems to represent an notable advance from the series of frustrating, repressed images above to an open recognition of gay possibilities.

At first glance it is a fairly bland and dated ‘pin up’ picture with casually assembled figures. Mac Lane gives these sailors extra masculinity by portraying them in poses which echo body building and heroic, Greek statues. There's still a distinct physical and compositional 'disconnect' between them, but looking closer, the details bring the image to life in a quite startling way.

This man is clearly a sex object. But is he uninterested, distracted, simply gazing out to sea? Or is he, sensing the eyes upon him, stealing a furtive backwards, perhaps encouraging glance?  Hoping for those idly dangling arms to encircle his waist? It's a delicious ambiguity and the understated depiction of the 'hunter's' bulge scarcely seems adequate to the possibilities here, but in that much at least Mac Lane limits his ambition to the norms of his day.

This is a bold image that is suggesting not just gay relationships, but gay sexual intercourse, so blatantly that it seems anyone would have spotted it.


As we have seen, sailors are well represented in Mac Lane's art, reflecting a fascination with that profession generally in the post-war 1950’s when young men were still being 'called up' to serve in distant parts of the world.
This is an informal visualisation of life on board a navy vessel (dated 1955) depicting bored, young men living together, enjoying a letter from home, a welcome change from the usual routine.

The uniform of the ’postman’ on the right is nicely drawn with good detail which makes me wonder if Mac Lane had 'served' himself. This sailor actually shows a discreet, little bulge too, but the depiction of most of the figures is not particularly erotic in style - apart from the foreground figure whose nudity is heightened by sweaty highlighting and barely visible underwear which is clearly not providing much modesty at the front. The eye is drawn to this hunky young man, who is well drawn as is usual for Mac Lane's foreground figures. He has put his letter aside and is clearly thinking lustful thoughts about his girl back home. It's unnoticed by his companions but we can secretly tap into his heightened sexual state.

In this early picture Mac Lane seems to have limited his hidden gay eroticism, you can find some subtle physical contact and suggestive shorts and hands but I get a sense that this is simply about the life of a sailor, perhaps biographical.


There's a good selection of Mac Lane's art at the Homoerotic Art Museum
have fun spotting the hidden eroticism!

Part of this article is a reworking of one of my posts In Praise of Sailors
Posted by Mitchell at 12:03