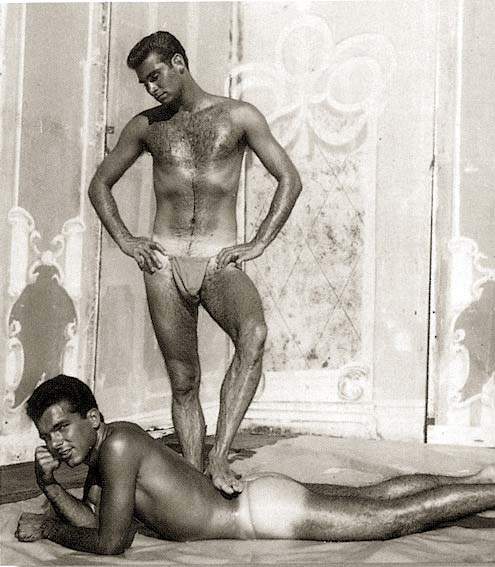 Given the restrictions on sexual display that Beefcake Studios had to contend with I can't really grumble about posing pouches that don't show very much, but this slack effort offends against the universal dress code, it's just so untidy! Not at all flattering to the wearer, although these two handsome creatures would get away with almost anything. I don't know their identities (info from readers appreciated) but this looks like an AMG wrestling still. The movie-style pose of the 'loser' is very 50's and possibly a satirical jab at closet cases in that industry and an assertion that 'we are everywhere and you adore us without knowing'. 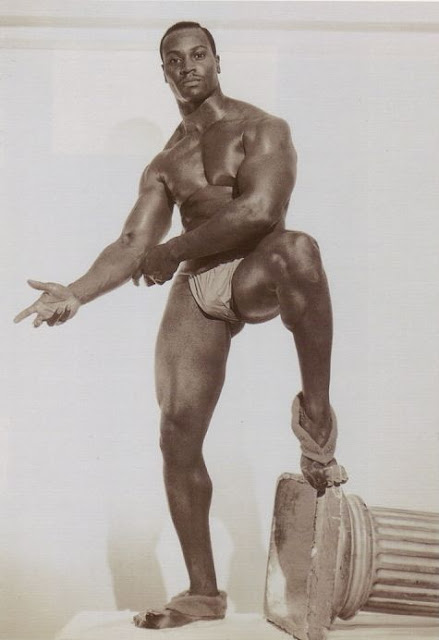 This chap seems to have the same problem. Maybe this was a period when there was a crack-down going on and models were told to lower the side strings to loosen the material. There's just the tiniest hint of projection here but visually it's the crispness of the fabric that catches the eye. Whilst I may chuckle at these loose pouches, I know the sensation for the wearer can be quite pleasant, particularly with freshly laundered material. Also anyone who's tried to make one with more cloth than needed between the legs will know that that can feel quite enjoyable too.

I don't know quite what to make of those moccasins, perhaps they are a necessary accessory in grubby body-building arenas but why didn't he kick them off for the photo? Did someone decide they were sexy? Or is this some peverse mitchmen-esque mockery by the photographer?

I was pleased to find this image so that I could include a black model in my Festival. They are not exactly rare in vintage photos but not that common either and are usually limited to star bodybuilders like this man, rather than those with more ordinary physiques. The poses are correspondingly formal and for that reason tend to be less suitable for my erotic musings, but in this case the glimpse of fabric disappearing between his buns is adequate entertainment! There's an even more fundamental problem with many old, black and white photographs of dark-skinned models. That is their body details don't show up clearly enough, due to the ageing of the original image or because the photographer's equipment or technique was not up to the challenges of less reflective skin tones.

This picture of Mark Nixon shows the visual equivalent of the 'loose material sensuality' I described under the preceding image. You can see and enjoy the fabric of his G-string curving under and between his legs.

The image itself, however, is the complete antithesis of the last one featuring a white, boyish, cute and mildly muscular model in a very submissive pose. Kneeling with legs together, hands behind back and downcast eyes there's more than a hint of bondage and captivity here. The G-string's improvised nature, instead of seeming odd, actually feeds into that narrative. It's eroticism of a different order to the butch, commanding maturity of our body-builder above and it defies the censors by exploiting their ignorance of what makes up gayness.
See more in my post on Mark Nixon in bondage 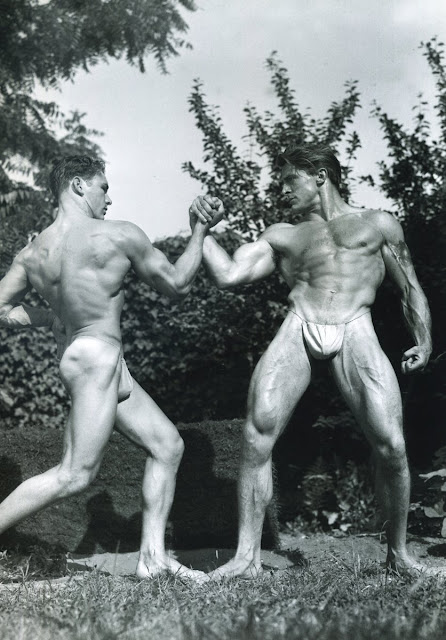 I could have featured this one in my 'Size Matters' post but it also shows a different aspect of bagginess emanating from the width of the material. The blurry blob in the middle indicates that it still did not disguise the contents to everyone's satisfaction! Perhaps I'm funny but I would have thought the other model's pouch was far more challenging to the sexually averse. I can't work out if this is a WPG-style outside shot or an AMG faked set, that furry box looks very dubious (and I'm not referring to the models here!).

To finish, a British photographer and a totally original, glossy, G-string design that probably felt great to wear. Less so to look at, although there comes a point where improvisation transitions through charming innocence to delicious manipulation. The picture illustrates the limited resources available to this photographer - or his impulsiveness and willingness to work with them perhaps (ships in the night and all that). He did do studio work as well.

There's a world of commentary about post-war 50's Britain here, not just in the furnishing and decorating detail, but in the suggested furtiveness of this homoerotic encounter with drawn curtains and anxious looking model. This was a time of very aggressive homophobic policing* in Britain and in some ways the looming shadow on the wall eloquently conjures up that sinister era.


More next time
Read this series from Part 1
Posted by Mitchell at 13:38