Regular readers will know that I have mixed feelings about the 'tentacles' genre but I occasionally feature stuff I like. This artist's work has a spark of originality in his ideas even if the technical execution is not quite as sophisticated as Baron's, who I featured in my last article. 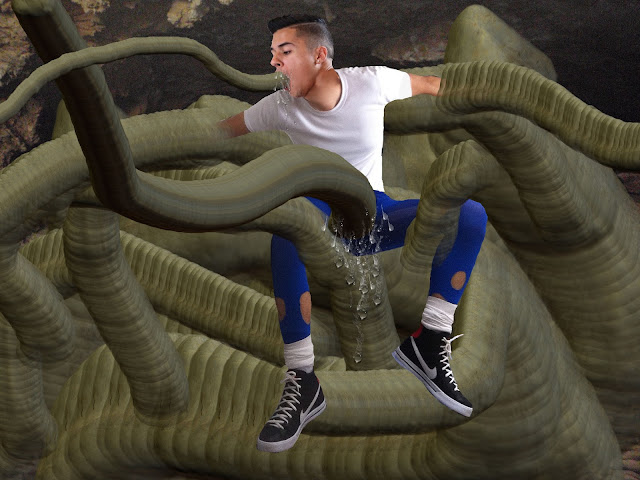 In this first example, Vore Tentacle (as he styles himself) reproduces a clichéd tentacle pose, much beloved of practitioners of this genre - namely the seated, arms wide, legs apart position. However, his taste in victims (here based on a well known porn star) is rather more interesting  than the superheroes and shaggy, anthropomorphic characters we usually see in this type of art. The intimidating bulk of the attacking creature is assembled quite sketchily and seems to morph into it's victim in places but this manages to suggest a far more potent threat and in it's way is more convincing than conventional tentacle restraint. 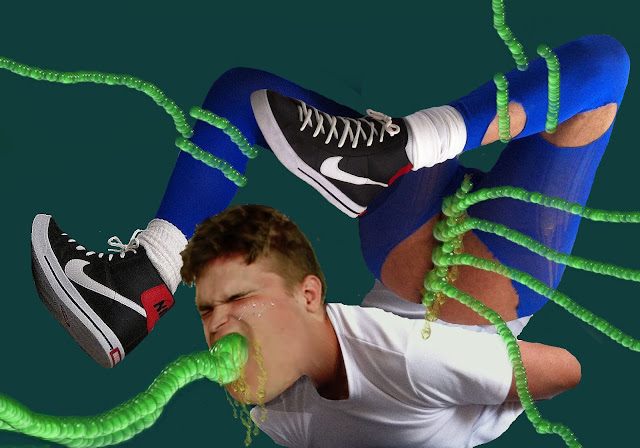 Vore also subjects his unwary young men to other, more interesting and varied (if improbable) positions during their ordeals, leaving no doubt that there's a good measure of compulsion and unpleasantness going on (as opposed to the 'lie back and enjoy it' school of tentacle art). The copious fluids produced are sensuously portrayed and seem to originate from the tentacles themselves. Vore plays with the idea of insemination here.

I like the fact that the victims are allowed to keep their clothes which are simply torn open to satisfy the tentacles' yearning for access to moist, dark orifices. Vore has a predilection for sneakers and modern casual wear which he associates with trendiness and vanity in his narratives. This provides a 'hook' for the viewer to connect with.
. 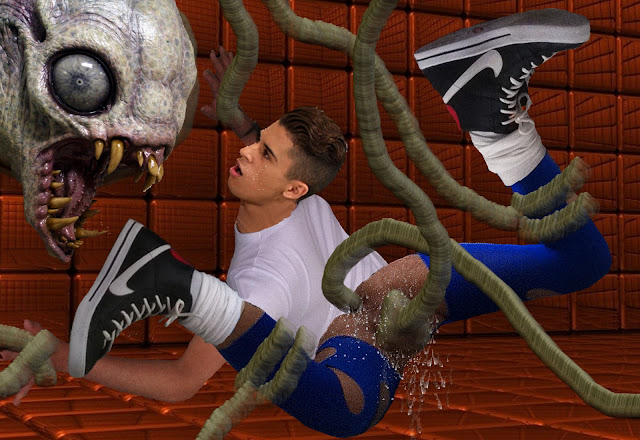 Both of the first two pictures reflect another regrettably common feature of tentacle-alia - the absence of any representation of the creature on the other end of the tentacles. Admittedly this allows for the imagination of the viewer to create what entity he wishes, but see how the impact is increased when Vore reveals it to be a well-known and very ferocious predator. Suddenly the probing, slobbering, distracting tentacles are the least of this unfortunate young man's worries. The sense of clumsy, erotic exploration in the earlier pictures crystallises into a more serious menace. The vulnerability of mankind during sexual intercourse is a subliminal fear which underpins many a teen horror movie but this is a nice variation.
. 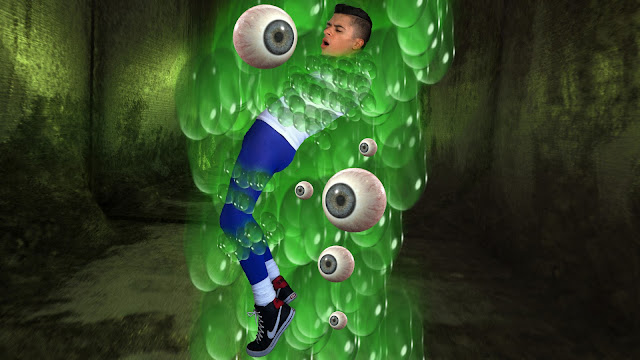 Vore's threats to young manhood also include a rather less substantial, bubble like creature seen here intent on enclosing and presumably absorbing it's hapless victim. The random eyes convey an disturbing impression of some sort of intelligence at work, rather than a programmed biological response. 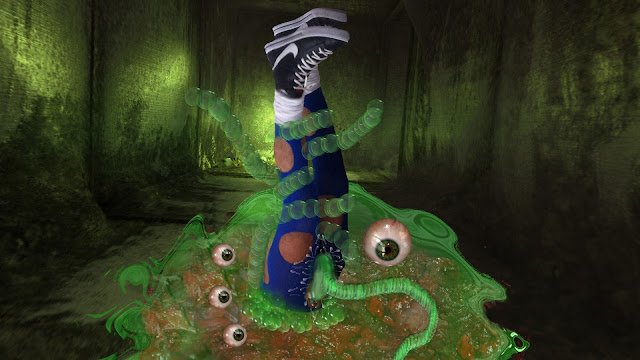 The eroticism is rather more obvious in this case. This jelly-like species, which uses a more conventional orifice for it's feasting, obligingly teases it's victim to a final orgasm. Perhaps this to distract him from his fate so he will struggle less. Perhaps it has found that the stimulation of the lad's sexual hormones enhances his flavour. Maybe it simply likes to extract 'boy-jus' as a tasty delicacy on the side.

At one time action films often used to feature heroes and villains trapped in quicksand or swamp and slowly sinking beneath the surface, a horrific but strangely sensuous fate. These pictures of plant absorption seem to have a similar effect. 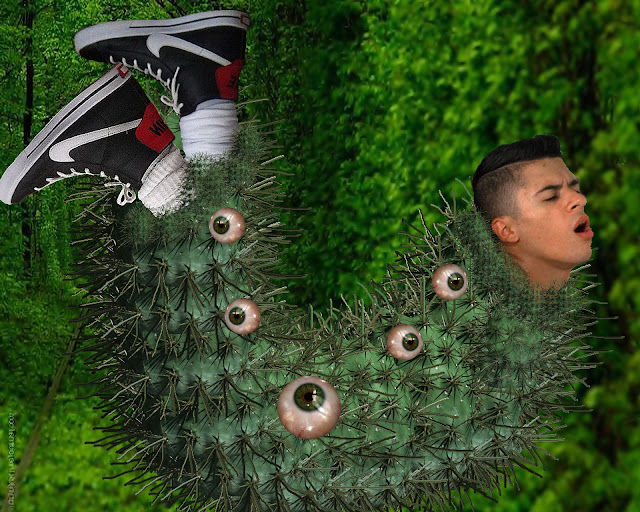 This spiky sub-species seems more designed to repel than attract it's victims but despite that inconsistency I find this subjugation strangely fascinating. Trapped like a mummy inside the plant the victim is completely helpless and somehow the mind imagines that the external spines reflect what is happening to him inside and it's not pleasurable - or escapable! I'm quite surprised that there are no digestive juices spilling out! 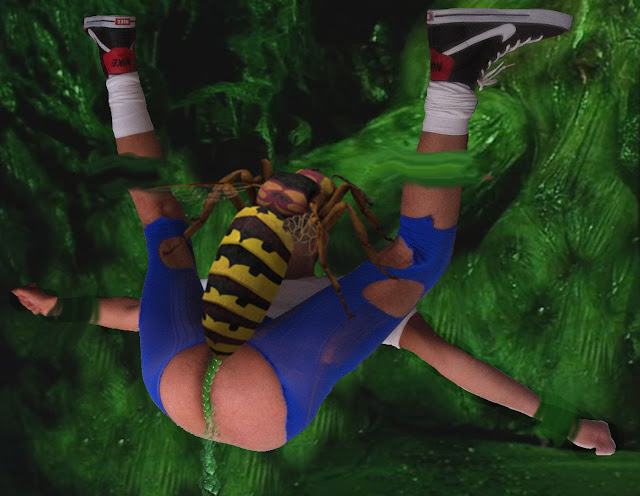 Giant wasps also feature in Vore's realm and he returns here to the idea of insemination. Whether the green matter presently holding the victim in check is going to allow the time for anything to come of this mating before consuming the 'carrier' of the gelatinous eggs is open to conjecture, but that's not much consolation to the the poor young man in the firing line. The imagery of weirdness, sex and danger here is particularly acute and in the best horror movie tradition it's set off by a humorous detail, the 'laddering ' of the young man's tights as they are ripped open. That's an offence against his vanity too. 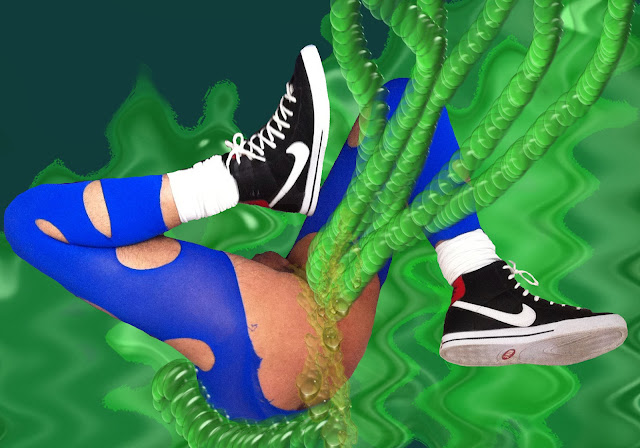 Not too many subliminal messages here but this picture has the great virtue of simplicity and focus. It isn't necessary to show the tentacles attacking every part of the body simultaneously and those flailing feet are as expressive as the most animated of faces.
What a way to go!


Vore Tentacle's blog at http://tentaclesmale.blogspot.co.uk
has disappeared now
Posted by Mitchell at 08:09

I've been fascinated by your article.
I'm honored that someone like you, dedicate you a space to my creations.
It has fascinated me as it describes my pictures.
If not much trouble, could comment more images? or even write or rewrite the stories of the blog?
thank you.
tentaclesmale.blogspot.com

This is very rare, but very rare. but I feel that it excites me.