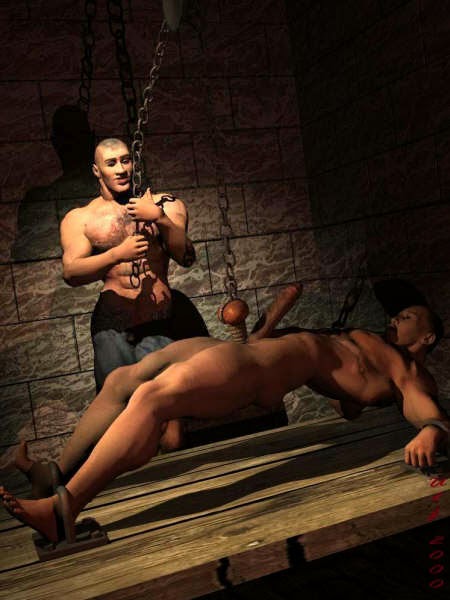 The earliest pictures I have are from the year 2000 and interestingly some of his best known images come from this time, like the pulley slave picture above. This picture has a simple directness that is compelling and the moment depicted, as the prisoner begins to discover the true nature of his torment, is  highly erotic. Some upturned toes testify to his discomfort and there's an intriguing bird-like shadow across the captor's midriff that suggests more complex undertones. Ulf's technique is already well developed here although the captor's body below the waist is a little muddy. The hoops restraining the prisoner are impressively chunky, but not entirely convincing. 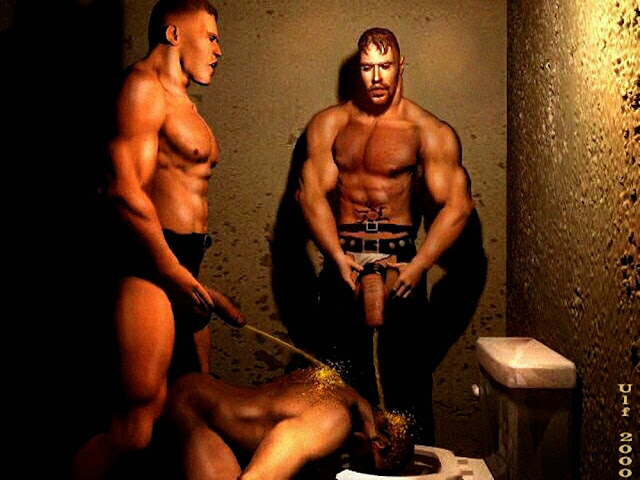 Dungeon tortures figure prominently in Ulf's 2000 pictures but so too does pissing as a symbol of alpha male dominance. It's a subject that Ulf continues to pursue to the present day but rarely more eloquently than this. The naked, head in toilet, subservient position of the 'sub' is also sexually receptive to the man behind standing astride him so there's a satisfying completeness to the idea and this also provides context for the prodigous organ of the third man at the back. 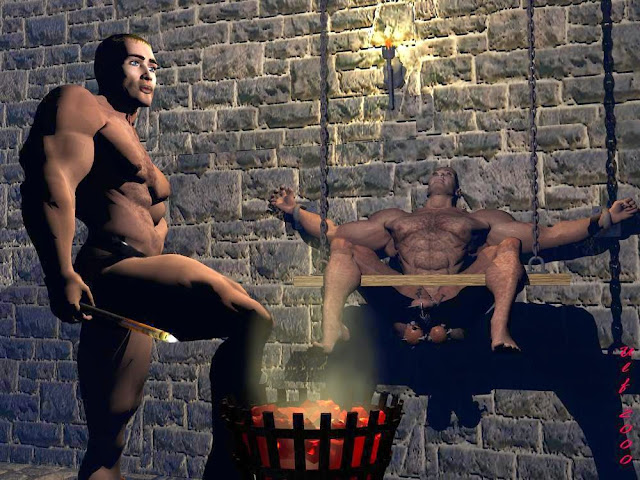 There's a studious artiness about this image as the torturer pauses in his work to ponder some, seemingly unrelated, matter. It lends him an air of casual detachment (or perhaps doubt) that only serves to emphasise the implied brutality of these proceedings even if Ulf does actually stop short of blood. Despite the calmness of the image there's a sense of powerful emotional undercurrents. All of these pictures are about men exercising power and the captives and subs are mere vehicles for it, passive supporting players whose consent is not readily apparent. 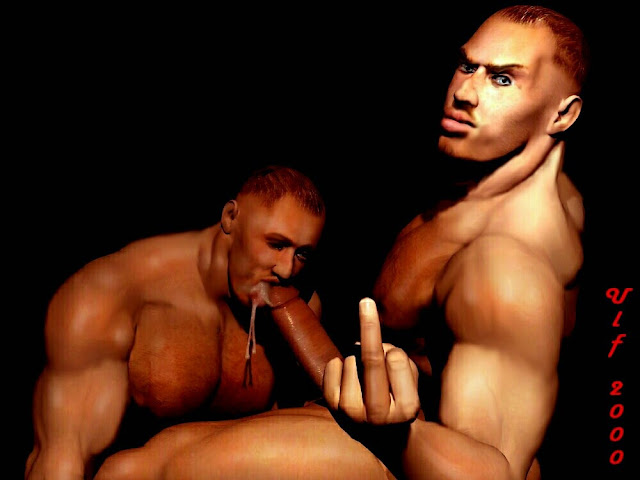 Ulf - He's Not Finished Yet

There's some interesting psychology here too, although in quite a different way. The muscular sub is being comprehensively dominated and this qualifies as another definitive image of that power fueled relationship. But this top seems ill at ease with his peers, his raised finger to the unseen new arrival conveying petulance and self doubt as much as anything, defiant perhaps but he's not exactly oozing confidence.

Ulf faces at this time have smooth, almost robotic quality with exaggerated fleshy lips and darkly outlined, piercing eyes. It creates a quite strange, intimidating appearance that augments the dark menace of the subject matter. 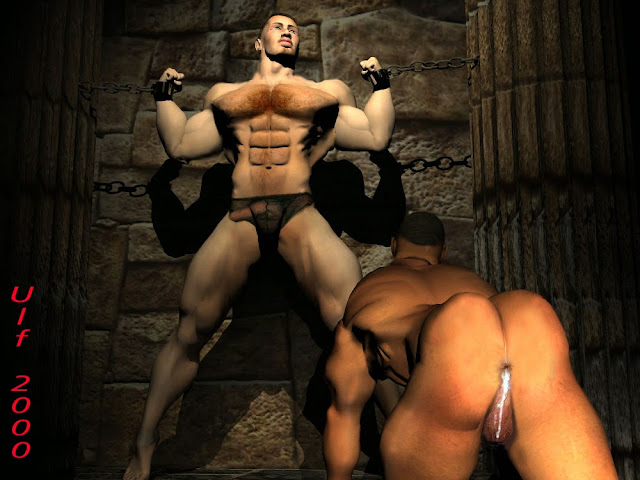 Buddy punishment is another fertile avenue for S&M eroticism, playing off the friend's care for each other. However here too Ulf's (unseen) master is not content to simply exercise his power but goes out of his way to humiliate his rival top by dressing him in sheer lingerie and comprehensively fucking his boyfriend - in front of him presumably. I can't decide whether the captive top's muscular response is a saintly rising above these deliberate insults, a self-destructive Sampson-esque revenge under way or a priggish rejection of his fallen lover Either way it portrays an altogether different sort of power derived from mental rather than physical strength. 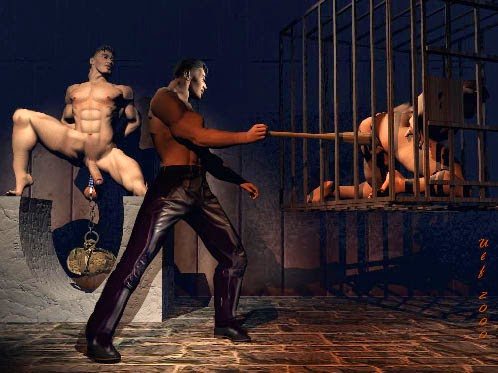 Another well known image and it looks like another top is being tormented not just by his own personal cbt rock (like a hero from Greek mythology) but also by the abuse of his buddy. It's the left hand captive's stretched straddling across his odd double pedestal and the tight visual alignment with the Master standing in front that makes this picture memorable. The right hand side of the picture peters out a bit with half obscured prisoner almost completely separated from the main pair. (I don't recommend trying to insert that size of implement inside an unrestrained man in a dangling cage either!). 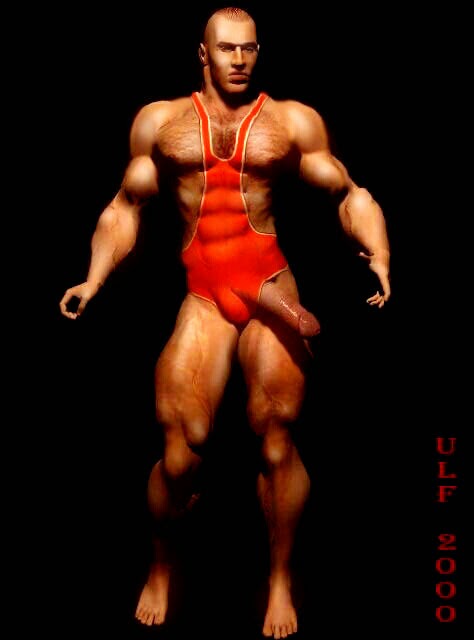 I have included this image as an illustration of the way Ulf depicts tight clothes at this time. It's almost as if they are painted on in places. Compare the hem stretched over the top of the cock (startlingly effective) with the line of the shoulder straps which follow the contours of the body precisely. If you compare this with the Master's harness in the 2015 'Almost there', you will see a similar but less pronounced wavering in the shoulder lines.

OMG, Mitch. You analyze these pics like someone discussing a Caravaggio. I love it! What's also interesting is that Your comments give us insight into Your personality! What You like, dislike, lust over, disdain. Thank You, SIR, for continuing to post these exciting and wonderful pix. And, thank You, SIR, for Your comments -- always interesting, lustful, entertaining, and simply excellent. You, SIR, do in the visual dimension what i endeavor to try in the verbal. Much Thanks, SIR! Pls to continue!
slave halperin aka old boy bill aka boy bill.
PS i will NEVER forget the S&M Clinic series. Took me to the moon, it did. Cheers!

Thank you boy bill, I guess I do get a bit nerdy at times! But I love this stuff. It may not be Caravaggio but it's equally important to our community and deserves more than just a fleeting glance.
By the way, there's more S&M Clinic on the stocks when I get the time to sort it out! .......and the story of a man called Brick!

I agree with billboi above. When I see an image, and then read your thoughts on it, I see it anew, more appreciatively. Lucky gift you have, a discerning eye. And your completely approachable way of conveying in words, that's a lucky gift for us. This website is a life-enhancer for me.

Thanks Rusty that's all I could wish for. Enjoy!