The Art of Eddie Chin

Joyride by Eddie Chin
This image makes a neat postscript to the previous article. I like the clean, simple style of Eddie Chin's work. He frequently depicts media celebrities and the glittery highlights, which are a trademark of his style, are perhaps a wry comment on the adulation bestowed on them. However, I confess I don't recognise this man or understand the title (a movie perhaps?).

G-strings, posing pouches and the like are not everyone's cup of tea but the artist's asian background (although he's located in the UK) allows him a different perspective on the garment. As beefcake goes I think this is a terrific picture, sexy and provocative as the title says. The mounded pecs and fabric disappearing between the legs are very nice details and I'm sure that foot doesn't go unnoticed by specialists either.

Eddie seems to be returning to the 50's here with the posing pouch obviously a cover for the nudity implied by the scenario. For me the result is not unpleasing. The handsome guest's perilously splayed open legs seem all the more exposed by the scantiness of his garment down under. Sadly the artist leaves all that to the imagination with barely a cheek visible this time. The picture is clearly influencd by the art of  'Banksy' but the social satire is rather less complex. 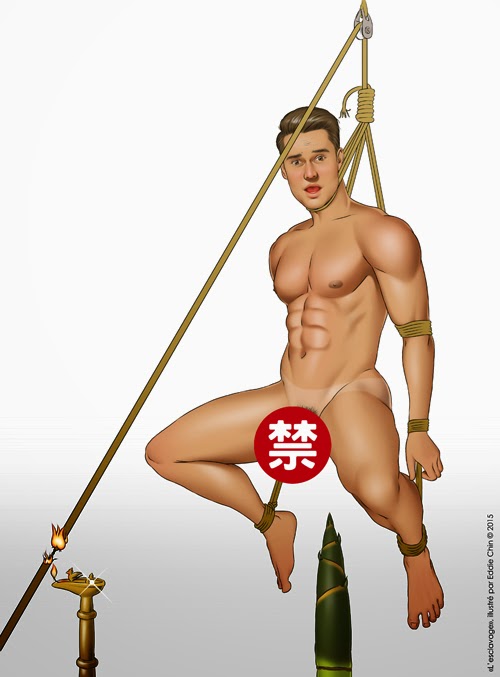 Eddie Chin - Save Him If You Can (Slavery)

After seeing the careful negotiation of taboos in the previous examples of Chin's work, this picture (if not the censorship) comes as something of a shock despite the humour. That vicious, bamboo-like spike is straight out of Tagame's world and the nooselike neck restraint is hardly frivolous either. The traditional oil lamp (more middle eastern than far east I would say) has sinister connotations all it's own. The youth of the victim is a turn-off for me (I suspect this is another 'celebrity' that has passed me by).

I enjoy Eddie's work, it leaves you wanting more and if you produce your own images it fires the imagination too. See more of Eddie Chin at Deviant Art

If you can identify any of these men please comment!
Posted by Mitchell at 12:15