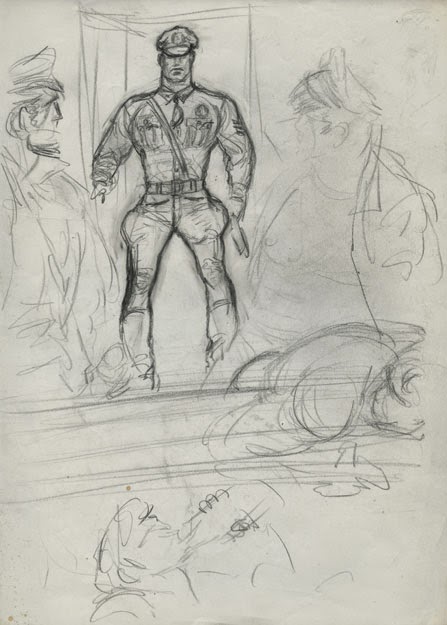 Tom of Finland - Sketch of Bar Scene
Whilst researching my recent series of articles on Tom of Finland, I came across this sketch and it reminded me of his well known Bar Predators series, discussed here in 2012. It was the figure on the right that triggered this thought, his jaunty cap and upturned collar is very much in the same mould as that group (see below). The bar itself (with the barman in a cameo role) and the figure bent over it also fit the original scenario quite neatly.
On closer inspection I also thought I could see a chain on the same biker's left shoulder, but that may be wishful thinking. The most compelling evidence though must be the tear in his T-shirt revealing his right nipple (see above and below). The other biker looks as though he has a beard in the new scene, which would be wrong, but it's possible this is just evidence of a correction of the jaw line, beards are fairly rare in Tom's work (more on Tom's Beards).
. 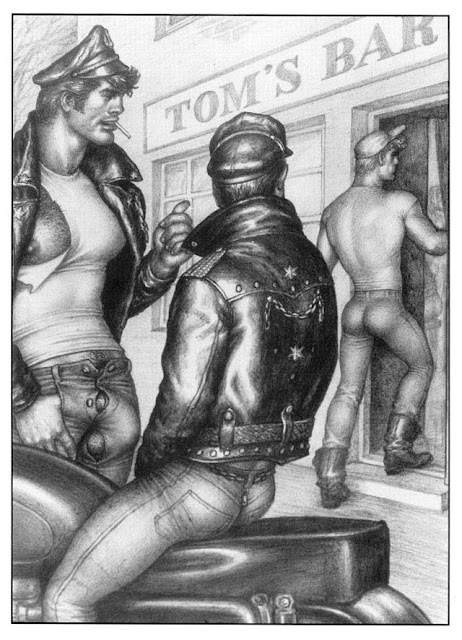 If my reasoning is correct (and I make no claims to 'discovering' this picture) it resurrects the argument as to why Tom never finished this widely admired series. It's not hard to imagine why this particular picture didn't go any further, there's something of a hole in the middle of the composition although this could probably be fixed - by lowering the viewpoint or bringing the cop in closer for example. The cop's pose and garb shown here feature in many of Tom's images and it's interesting that this is the only part of the sketch which is anything like complete, illustrating Tom's obsession with it. For my money the bikers are much more interesting, but that's just my obsession!

You can see the extended series in it's entirety
at the revised version of my original Bar Predators article.
Posted by Mitchell at 23:37

Just an aside: The term for a beautiful male ass is "kalypygous" (sp.?). The term is from the Greek for beautiful=kalos + ?