Index to Tom of Finland Articles 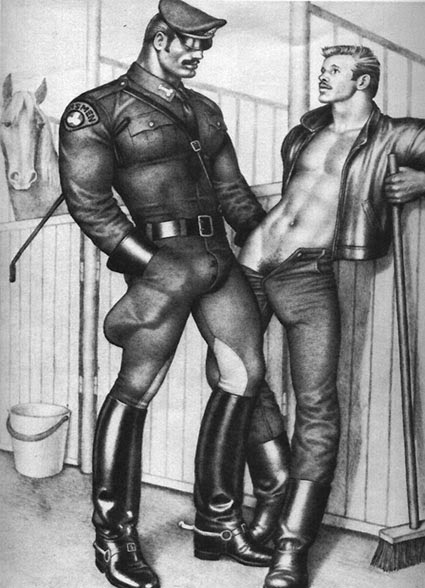 I've seen this described as Tom's best picture.
There's an endearing feeling of nostalgia as Tom's musclebound cop (his 'alter ego'),
extends a hand to the younger generation, each dressed for their own era. Tom was 65 when he drew this and AIDS was at it's height, decimating the gay community, so it seems an appropriate gesture. Note the envious horse!

Part 6 - Black and White -I
Stereotypes, sportsmen and the thrill of forbidden fraternisation

Part 7 - Black and White -II
A final flowering in maturity

In addition, there are other articles about Tom of Finland here:-

Tom and Fascism - the historical background
The Petulant Leatherman - surprising attitudes and unexpected emotions in one picture
Boot Worship  part of an article on another artist
Bar Predators, Bar Predators Revisited - reviewing and extending a popular series, arguably his best work

Tailors and hidden eroticism - hero worship as a form of submissiveness.
Tom's Sailors ,  Tom's Sailors 2
Beards in Tom of Finland - their frequency and significance
Tom's Beard in the Pekka story 'Loggers'  - an addendum to the above,
also the ' Loggers' seduction scene
New unearthed artwork - 3 motorcyclists cavort in mud, from 1959
Posted by Mitchell at 09:57