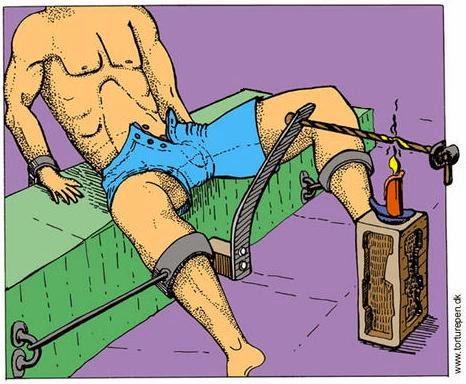 1 Well Sprung
Torturepen is a fem-dom artist who depicts fairly extreme punishments of men, often in the form of fairly crude cartoons which don't really qualify on any count for this series, although they contain some interesting ideas for S&M connoisseurs who don't mind the skirts. This opening image (which has not been edited by me) is rather more refined in style than them and sums up the general thrust of the artist's work quite nicely. The venom is softened by a fiendish inventiveness and there's an attention to irrelevant detail, like the elaborate block supporting the candle, that is quite pleasing. 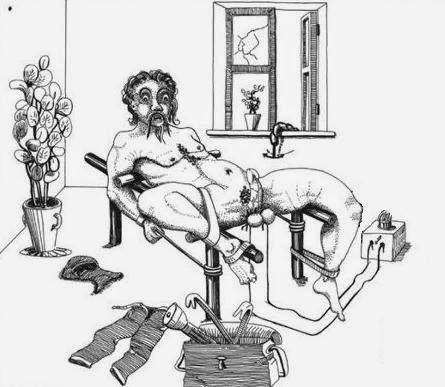 2 Bad Luck
In this picture there is a rationale for the punishment as the captive man's evil intent is comprehensively spelt out by a bag of traditional burglary equipment, a balaclava hood on the floor and a grappling iron slung over the window sill. Presumably the broken window was a badly aimed first attempt with the iron, which sowed the seeds of his downfall.

The open frame supporting the incompetent felon makes his position seem precarious as well as exposed, and his restraint is designed to focus attention on his balls as the primary object of punishment, rather than his cock or ass which is commonly the case in conventional gay S&M.

You can see in this image that when Torturepen depicts men's heads they are not allowed to be attractive (as is the case with the artist 'Emma'). I suspect the podgy middle-aged physique might have some fans though. 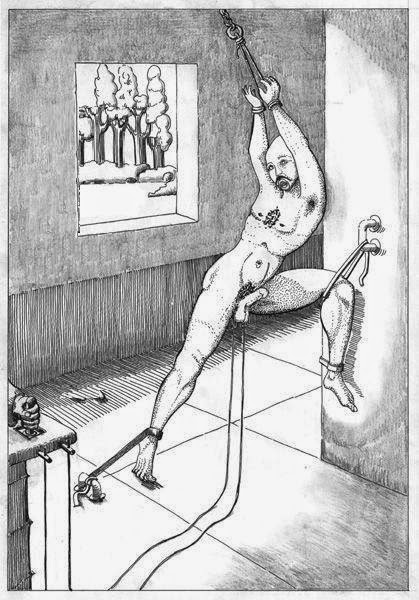 3 Electro Interlude
This is a detail of a larger picture with a similar theme to the previous one and it shares the same interesting styling which is vaguely mediaeval and middle eastern – although the extended restraint position (painful in it's own right) seems distinctly Japanese in inspiration. Whoever cropped this picture had a good eye for composition, the summery garden showing through the window aperture, which is completely unbarred and open, mocks the captive man in his pain. 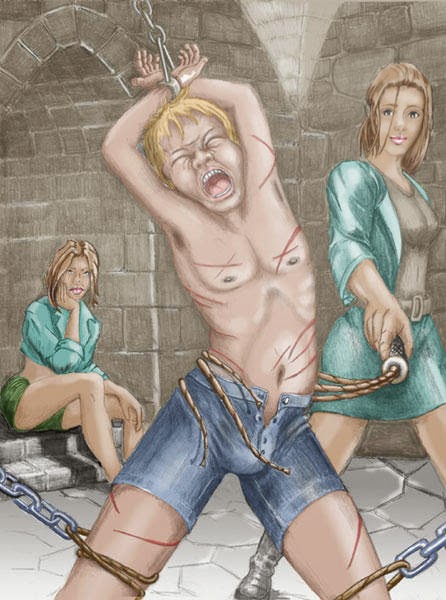 4 Man-Whipping
My final example features women (sorry chaps!) but I thought it was worth including on it's own merits as a picture and an example of a completely different style.

There is a Torturepen website but it's worth using search engines too.

For other artists in the A-Z series click on the label below or search by name.
Posted by Mitchell at 10:11