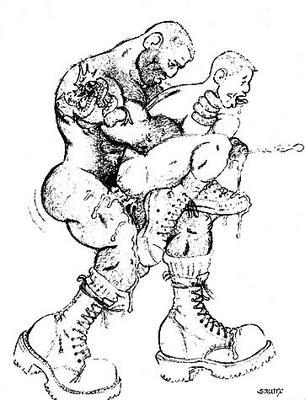 Squire - Two men
This is a real mystery man. I have just 3 pictures by him, all very fuzzy and indistinct, but so striking that I had to include him in my survey. The first is his most well-known and features a craggy jawed, boot boy having fun with a young sportsman in basketball boots. Literally swept off his feet by a big, butch, hairy man. Well, we all dream don't we? Despite the signature, it's often attributed to Palanca, presumably because of the oversized boots. (Palanca actually does bare feet rather than boots - see my A-Z article on Palanca) This picture also seems to endorse the supposed relationship between shoe size and other body parts, I wouldn't know about that but, beyond the humour, there's some nice man drawing here, both characters are appealing and there's a satisfying balance in the composition. The big boots suggest a pendulum and a sense of rocking motion, but also provide a firm base for the image. 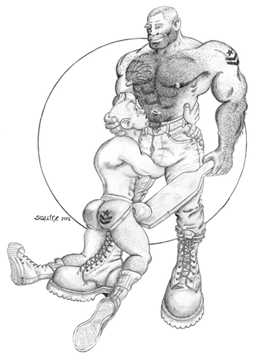 This image employs the same theme of size and age difference, but is less playful in mood. I find the grovelling sportsman and military bully rather unappealing here, but the detailing of the boots and uniform is marvellous. That jockstrap bulge balanced on an intimidating paddle is pretty fine too. The finish is more polished in this picture, but note the odd positioning of the sportsman's left foot and right hand.

Squire - At The Urinal

The final image is quite different in feel, somewhat reminiscent of the work of 'Big in Boots', an artist I have yet to feature in this series. The subject was dictated by a commission but Squire has certainly laid on a sleazy treatment. The maturity of the subject character forms an interesting progression from the earlier pictures.

I haven't been able to find any web address for Squire's art, he was mentioned at the Tom of Finland Foundation in 2002, but I don't know if he's still around, info from readers welcome.

For earlier articles in this series, click on the A-Z label below
or search by name in the masthead box.
Posted by Mitchell at 09:31