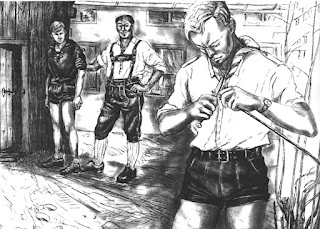 Raute specialises in scenes showing corporal punishment of boys using canes and similar implements. The situations shown appear to be domestic in nature and are not overtly sexual. The adults are always fully clothed and decent but the boys are sometimes youthful indeed and often take their canings on bare bottoms. It's not the type of scenario I like to feature in this blog but I will acknowledge Raute's popularity with the spanking fraternity and his prodigious output. 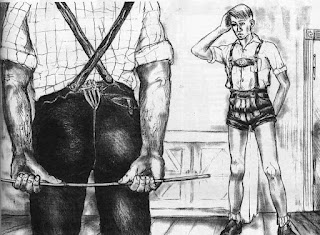 For me, his depictions of adult men are frequently better than the youths, they are well observed and convey a sense of strength and maturity that hardly needs contrasting with willowy boyhood. This picture shows artistic maturity too, a clever dramatic composition depicting power and heart-sinking fear. 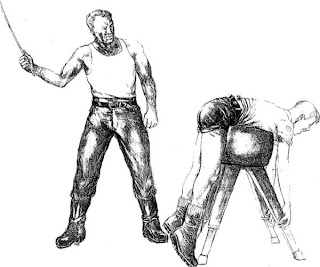 This example depicting the mechanics of caning is more typical of Raute's style than the sophisticated compositions of the first two pictures above. I have allowed this one through because the rangy, young man seems old enough and is still dressed. As a shorts and uniform man I will admit to a guilty fascination with the lederhosen and military/scout uniforms which Raute features. The clumpy boots are a nice touch. 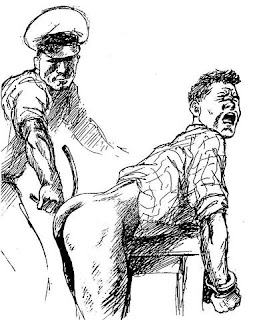 This final dramatic example is probably known to many of you, the recipient of this bare bottom beating is no kid either. I've attributed this picture to Raute on the basis of the drawing style, but the use of the handcuff restraints and hosepipe are not typical of his work. Maybe someone out there can identify this for me?

I don't have a website for Raute - info from readers welcome! There are selections of his work in most spanking groups - try Jockspank or M_Spank_M.

For other articles in this series click on the A-Z label below or use the search box to find a specific artist
Posted by Mitchell at 12:15