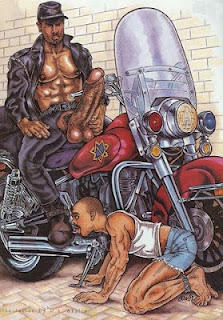 RA Schultz appears under R in this survey by virtue of the RAS signature he uses on his work. He is perhaps best known for his portrayals of humongous dicks in the 'Giant' series but I found a good selection of fetish images amongst my collection of his work. The first picture shows both facets. The power contrast between the street-clad, grovelling youth and the black, leather guy astride his big, shiny motorcycle is highly erotic. Is this a vandal caught out and disciplined? The towering dick is a bit much but at least it's erect, the big floppy ones often shown by RAS are not my bag at all! 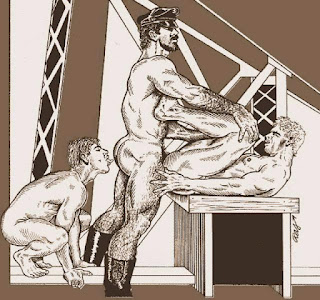 More sexy grovelling here as we see another stereotypical leatherman who has somehow persuaded two rather good-looking men to strip and provide him with some sexual release. These are possibly construction workers judging by the stylised, industrial, bridge-like setting. The square jaws and stubble on the two men makes their submissive acceptance of humiliation and penetration seem very uncharacteristic as though the leatherman has some strange hold over them. 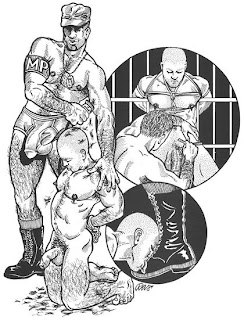 Schultz's pictures are often illustrations from magazine stories, condensing different elements of the narrative together and this composite of an unorthodox military induction is a nice example. Haircuts in the military are part of the legitimate imposition of obedience and discipline but it's not usually at the hands of an MP in his underwear! The forced body shaving produces a glimpse of gleaming tumescence as it homes in on the pubic area but the boot licking that follows is a prelude to some painful punishment, some of which is shown below. 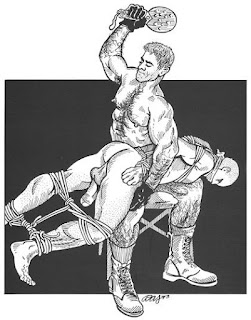 RAS has done plenty of bondage images but this explicit paddling is unusual, he generally only hints at fetish pain and invasion by having characters brandish fetish devices before the captive. This image is a bit of an odd, mismatched 'composite' but RAS has captured with a few lines, a distinctive older man's face and body which we all recognise as 'real'. The odd angles are a quite common stylistic feature in Schultz's work. 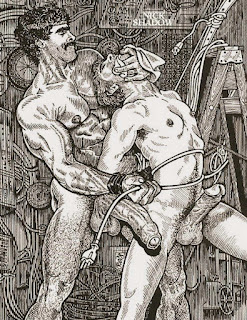 This memorable image showing a young man being tied up in electrical cable has a great deal of drama and energy and captures the sexual excitement of forced submission and immobilisation in a way that has rarely been bettered. It dates back some years as you can tell by the Nick Shadow logo and the retro hair style but is no less effective for that. The shading of the bigger man's arms and torso, suggesting sweaty exertion, are a nice touch. 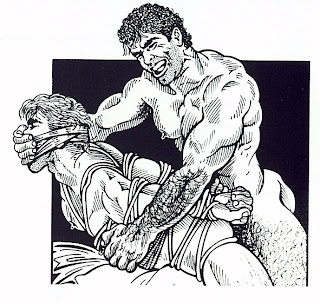 This final, explicitly sexual image is another little gem summing up the essence of bondage fantasy. The older top has an interesting, manly man's face, a chunky muscular body and hair in all the right places. You can sense the lust raging through him as he takes his captive. The bandage-like bondage and tape gag (here supplemented by a restraining hand) seems to have had a fascination for Schultz, it certainly accentuates the helpless position of the captive.
It's hard to sum up RAS, I love his take on masculinity (beyond the cocks!) and he's produced some memorable fetish images, stylish, quirky, a little bit posed and sometimes frustratingly imperfect. It was quite hard for me to make a selection for this article, to find a theme. In the pictures above the style is simple but there are occasional glimpses of a more lusher technique and in fact some of his vanilla images are stunningly sensual, I couldn't resist including the bath-house scene below, check out the man on the right. 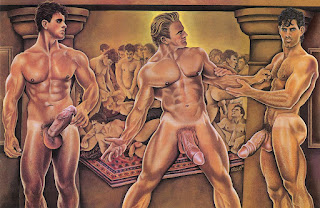 There's much to admire in his work. I don't have a website for RAS - info from readers welcome! There are selections of his work available if you google around.

For other articles in this series click on the A-Z label below or use the search box to find a specific artist
Posted by Mitchell at 11:40